Bangladesh has been an independent country in South Asia since 1971, home to around 158 million people. The country is almost completely surrounded by India, the only border with Myanmar in the southeast and the Bay of Bengal in the south. The country’s largest city is Bangladesh’s capital Dhaka, whose population (with its surrounding area) is now estimated at around 12 million. There are interesting sights such as old caravanserai and the Banga Bhavan, the presidential palace.

Dhaka is, also because of its port, the most important city in the country and a suitable starting point for holidaymakers who want to travel to other places in Bangladesh, because Dhaka offers all travel options from car and bus to ship. In Bangladesh you can visit mangrove areas and national parks with typical South Asian flora and fauna. Bangladesh is a very water-rich country, which is crossed by many large and small rivers. In the tropical climate, this always leads to extreme flooding.

Many also know Bangladesh from Bollywood films, for which Bangladesh offers a popular backdrop for filming. The industry in Bangladesh mainly consists of manufacturing and manufacturing industries. The agriculture brings out products such as rice and jute. The cultivation of corn, sugar cane, wood, tea, wheat and vegetables has also increased in recent years. This new range of crops has enabled Bangladeshi farmers to cope with the decline in jute exports. Jute used to be needed in large quantities and was a safe export product from Bangladesh. But since jute is replaced by plastic nowadays, demand has declined sharply. While the export of unprocessed jute is declining, the textile industry is in full swing. The production of jute products, leather and leather products are an important part of the industry in Bangladesh. Bangladesh also has natural gas and coal.

form of government: Bangladesh has been a republic in the Commonwealth since 1991. The constitution dates from 1972 and was last changed in 1996. The parliament (Jatiya Sangsad) consists of 300 deputies elected every 5 years. Bangladesh declared itself on March 26, 1971 from Pakistan independently, In 1974 Pakistan recognized independence.

Language: The official and colloquial language in Bangladesh is Bengali (Bangla). English is used primarily in larger cities as a commercial and educational language. However, taxi drivers in the country’s major cities often have no knowledge of English.

Religion: 83% Muslims (mostly Sunnis), 16% Hindus, alongside Christian and Buddhist minorities. Islam has been the state religion in Bangladesh since 1988.

Local time: CET + 5 h. There is no changeover between summer and winter time in Bangladesh.
The time difference to Central Europe is + 5 h in winter and + 4 h in summer.

Bangladesh borders in the west and northwest with the Indian states West Bengal in the west and northwest, Meghalaya and Assam in the north and with Assam and Tripura in the east. The total length of the border with India is 4,053 km. The southeastern neighbor is Myanmar (193 km border length). In the south is the Bay of Bengal (580 km of coastline). The Keokradon (with 1,033 m highest elevation in the country) is located in the southeastern part of the country in the region of the border triangle between Bangladesh, India and Myanmar.

Bangladesh is dominated by the delta region of the Brahmaputra, Ganges and Meghna rivers and numerous tributaries. This flat area is crossed by numerous watercourses and is increasingly flooded due to deforestation.

The capital Dhaka is only six meters above sea level. Should the sea rise by one meter, 17% of the country’s surface (25,000 sq km) would be flooded without additional coastal protection. According to current estimates, however, a sea level rise between 18 and 59 cm is assumed, which can be countered with effective coastal protection, the costs of which make up about 0.1% of the gross domestic product.

In the mouth region of the Ganges and Brahmaputra, along the coast, there are Sundarbans made up of mangroves. In 2004, the flat, wide coastline caused the tsunami, which was catastrophic for all of South Asia, to lose its force off the coast.

The original forest was largely destroyed, and only 15% of Bangladesh is forest. The predominant vegetation in the lowlands are bamboo, mango trees and various types of palm trees. The eastern part of the country is characterized by forested hills. The extremely high population density for a flat country (1,066 inhabitants per km², the highest value of all flat countries) led to the conversion of original vegetation into arable land, where the majority of rice is grown.

In March / April and October, tropical cyclones often occur over the Gulf of Bengal with often serious consequences, since large parts of Bangladesh are flooded by the floods.

This map of the population distribution in Bangladesh was created by the Worldmapper team. Densely populated areas appear bloated, the area of ​​sparsely populated areas is reduced. The shape of the grid has been preserved; an underlying map with the original geographical extent helps interpret the map. The distorted map should help to present abstract statistical information clearly. 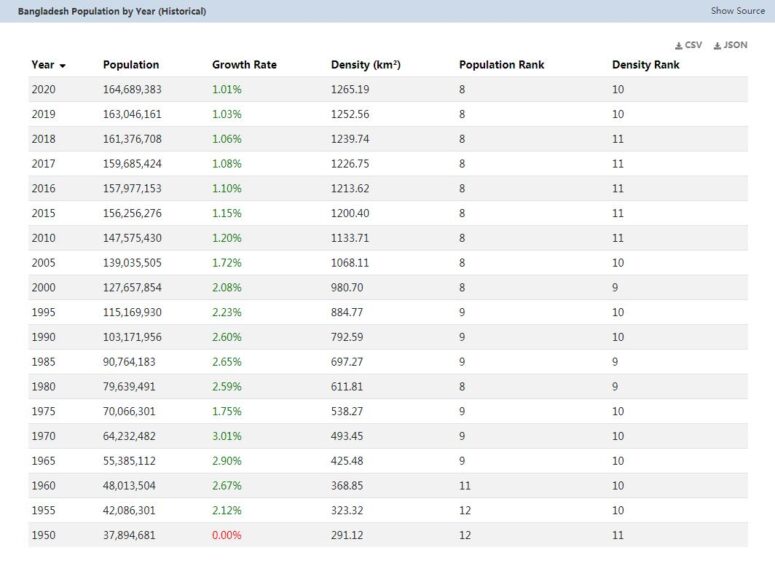 The climate in Bangladesh is tropical, with rainfall increasing from west to east. Bangladesh is in the area of ​​influence from the southwest monsoon, the average annual rainfall is between 1,500 and 2,250 mm, in the eastern part of the country at the foot of the Tripura-Lushai Mountains even between 3,000 and 4,000 mm.

The average daily maximum temperature is 25 ° in January and 35 °C in April. The rest of the year the temperatures are around 30 ° C. Bangladesh has three main seasons: the monsoon or “wet” season from late May to early October (when more than half of the annual rainfall falls); the “cold” season from mid-October to late February, and the “hot” season (called “little rainy season” in Bangladesh) from mid-March to mid-May. There is also a “cyclone season” – May through June and October through November. Despite the fact that these are the only observable seasons, locals refer to six: Basanto (spring), Grishma (summer), Barsha (rainy season), Sharat (autumn), Hemanto (foggy), and Sheet (winter).