Since China has opened up more and more to the western world in recent years, the diverse country has attracted more and more holidaymakers (especially on tours) who can admire countless exciting sights here. With 1.3 billion inhabitants, the most populous country in the world offers numerous different landscapes and cultures. On the one hand, China is the land of the mountains, especially in the north on the border with Mongolia and on the south border to Tibet, China presents incredible mountain landscapes. On the other hand, there are also white beaches in the south of China.

One of the highlights of a trip to China is undoubtedly the Great Wall of China, which was supposed to protect the Chinese Empire from nomadic horsemen a long time ago and is the largest building in the world. Another highlight is the Forbidden City in central Beijing.

There is now a huge selection of hotels in China, ranging from simple guest houses to luxurious 5-star accommodations. China has several different climates, the north, northeast and west, for example, have very hot summers and very cold winters. In the south, however, it is tropical and there is a high mountain climate in Tibet.

The Chinese name of the country means “The Middle Kingdoms”. China’s history has spawned many legends and myths. Some of the stories are related to the emergence of culture and science, language, the names, the philosophy of the country and even the cuisine of China. Chinese folk belief and impressive traditional Chinese medicine, which was very progressive at a very early age, also belong to the more than 5,000-year history of China. Of course, art and music are also part of it.

Form of government: China is a socialist people’s republic. The constitution dates from 1982, the last change was made in 1999. The parliament consists of one chamber, the National People’s Congress ( Quanguo Renmin Daibiao Dahui ) with 2,985 members, who are elected every 5 years by provincial parliaments, autonomous regions, cities and the People’s Liberation Army. The dominant political power in China is the Chinese Communist Party (CCP) with the Politburo Standing Committee, the Party Secretary General and another six members as the highest decision-making body.

Language: The official language in China is Mandarin. In addition to numerous regional dialects, Cantonese (Yue), Fukienese, Xiamenhua and Hakka are spoken. The autonomous regions of China speak their own languages ​​(for example Tibetan or Mongolian). The translation and interpreting services are of a good standard. Business people and tour guides also speak English.

Local time: CET + 7 h. In China there is no changeover between summer and winter time.
The time difference to Central Europe is + 7 h in winter and + 6 h in summer.

Mains voltage: 220 V, 50 Hz throughout the country. Two or three-pin flat plugs are used in the different regions, so multiple adapters are required.

With a maximum north-south extension of 4,500 km and a west-east extension of 4,200 km, China covers an area of ​​9.6 million square kilometers (third-largest area of ​​all countries) and thus roughly corresponds to the size of Europe up to the Urals. The country borders 14 neighboring countries, which is a record: Vietnam, Laos, Myanmar, Bhutan, Nepal, India, Pakistan, Afghanistan, Tajikistan, Kyrgyzstan, Kazakhstan, Russia, Mongolia and North Korea. China is separated from its neighboring countries by numerous natural borders: in the west, northwest, south and southwest by inaccessible mountain ranges, in the north by deserts and steppes, and in the northeast by the great rivers Ussuri and Amur. Adjacent seas are the Yellow Sea and the East China Sea, the entire coastline is 14,500 km.

The longest river in China with 6,300 km is the Yangtze (Pinyin: Chángjiāng), the highest elevation (and also the highest mountain in the world) with 8,850 m the Mount Everest on the border between Nepal and China. The largest lake in Cinas is the 5,000 sq km Qinghai Lake.

The surface, climatic conditions and thus also the population density of the different regions differ greatly. The area of ​​China can be divided into three areas:

China’s east is characterized by four large and densely populated alluvial plains. Here the deltas of the big rivers spread out. A mountain rises in the coastal area of ​​the southeast, the south is more hilly. The region reaches a maximum height of 500 meters. At the foot of the Tianshan Mountains is the Turfan Plain with the lowest point in China (-154 m).
There are several mountains in the west of these alluvial plains with plateaus and extensive basins (including the Tarim Basin, the Mongolian Plateau, the Loess Plateau, the Sichuan Basin or the Yunnan-Guizhou Highlands. The peaks reach about 1,000 to 2,000 m above sea level.
Western China is dominated by the high mountains and plateaus (Himalayas, Pamir, Tianshan, Highlands of Tibet). The highlands of Tibet (“Roof of the World”) are among the highest plains in the world, with average heights of 4,500 m. The western part of China is shared with Inner Mongolia (with the Gobi Desert and Taklamakan) the least precipitation in the country.

The longest rivers in China are the Yangtze, the Yellow River (Hwangho) and the Xi Jiang. Other important rivers are the Mekong, Pearl River, Brahmaputra and the Amur. The rivers flow from the high regions to the east into the lower plains.
Numerous bodies of water in China are heavily polluted.

China is divided into 22 provinces, 5 autonomous areas and 4 government cities.

This map of population distribution in China was created by the Worldmapper team. Densely populated areas appear bloated, the area of ​​sparsely populated areas is reduced. The shape of the grid has been preserved; an underlying map with the original geographical extent helps interpret the map. The distorted map should help to present abstract statistical information clearly. 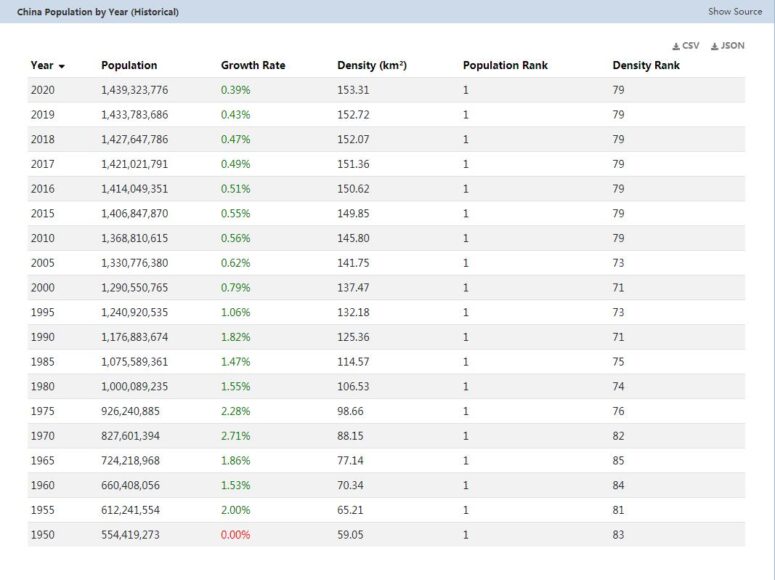 The climate in China is very diverse and ranges from bitter cold to unbearably hot with all possible shades. With the exception of the coastal regions, it is strongly continental everywhere (cold winters and hot summers). Another common factor is the summer, rain-bringing monsoon, which affects the regions to varying degrees.

Temperatures: The average winter day in the north reaches a maximum of -8 ° C, July temperatures here can exceed 30 ° C. There are also large seasonal temperature differences in the Yangtze Valley. In the very south, the hot and humid summer lasts from April to September. In the northwest there is dry, hot summer, here is also China’s hottest place (turpan) with a maximum value of around 47 ° C. The winters here, like in all of northern China, are very cold.

The annual rainfall rise from west to east and from north to south. With barely 100 mm of precipitation, Tibet and the central Chinese deserts are the driest regions in the country. Agriculture is only possible here in oases. Most precipitation (up to 3,000 mm) falls in southeast China and Formosa. Across the country, up to 90% of the annual rain falls in summer. Due to the lack of rainfall in the west and north, agriculture is practically only practicable in the southeast half of China.

Typhoons are tropical cyclones with enormous destructive power. The south and south-east coast of China is hit by typhoons every year, which often cause great damage and also kill people. The typhoons usually pass Hong Kong and Taiwan and reach land near Japan, but the coast in the Shanghai region is also at risk. The peak season of typhoons in the south of China is between mid-May and October / November, and in the north it only starts in June / July. During this time, sufficient water temperatures (25 ° C) are reached for the formation of tropical cyclones.