India’s contemporary history includes the time after 1984, when Indira Gandhi, who had been India’s prime minister most of the time since 1966, was killed.

Since its independence in 1947, Indian politics has been dominated by the Congress Party, to which Gandhi, her father Jawaharlal Nehru and son Rajiv Gandhi belonged.

At the 2014 parliamentary elections, the Hindu Bharatiya Janata Party (BJP) won a clear victory. Narendra Modi took over as India’s prime minister on May 26, 2014. Thus, the secular Congress party that has ruled India for most of the post-war period had to relinquish government power.

After the killing of Indira Gandhi on October 31, 1984, his son Rajiv Gandhi took over as prime minister. In the December 1984 election, he won a sympathy wave that gave the Congress Party its largest electoral vote so far: half the votes and three quarters of the seats. Rajiv Gandhi emerged as the one to lead India into the data age of renewal and reform, and he began a slow liberalization of the economy.

Gandhi lost the election in 1989 after charges of large bribes in a arms deal with Swedish Bofors. New head of government became Janata Party leader Vishwanath Pratab Singh. He faced fierce opposition and had to retire as he tried to put in place a reservation policy that would ensure that more people from lower castes got responsible positions at the expense of people from high castes.

During the May 1991 election campaign, Rajiv Gandhi suffered the same fate as his mother; a bomb exploded during an election meeting in Tamil Nadu, apparently condemning a revenge from Tamils dissatisfied with his intervention in the conflict in Sri Lanka. His widow, Italian-born Sonia Gandhi, rejected calls to take over the leadership of the Congress Party. The veteran PV Narasimha Rao was then elected Congress Party chairman and led the government until May 1996.

In December 1992, fundamentalist Hindus attacked the mosque in Ayodhya, Uttar Pradesh, northern India. About 450 people were killed in clashes between Hindus and Muslims. The mosque was demolished and in the ruins the Hindus erected a makeshift temple in honor of the god Rama.

Economic reforms, separatist movements and religious conflicts characterized Rao’s time in power. The Rao government implemented a far-reaching economic reform program in the years 1991-1996, with the aim of facilitating an internationally competitive economy. Market economy, free trade and investment from abroad were stimulated. Rao broke with Nehru’s “license economy”, a planning economy model that had been followed for over 40 years. Indian economy opened up to the outside world; foreign investment showed strong growth. India’s 21 stock exchanges were opened to foreign investors in 1992. The rupee was made convertible.

The battle with militant Sikhs in Punjab has long been the bloodiest of the regional conflicts, which also included Kashmir, Assam, Mizoram and Nagaland. Around 20,000 are believed to have been killed during the fighting in Punjab during the period 1981-1993. After a massive offensive, the authorities at the turn of the year 1993-1994 claimed to have “crushed” the Sikh guerrilla.

The conflict between Hindus and Muslims flared up again in the early 1990s. The ancient Babri Mosque in Ayodhya, Uttar Pradesh, became the foremost symbol of the religious struggle after it was demolished by Hindu extremists in December 1992. This led to riots across much of India, with approximately 3,000 deaths in the following months. Mumbai (Bombay) was particularly hard hit.

After rapid growth, the Hindu nationalist Bharatiya Janata Party (BJP) had become the second largest party in the 1991 elections. In the 1996 elections, the BJP became the largest party in the lower house, but the BJP government lasted only 13 days. The longstanding dominance of the Congress party was broken by its worst election ever; the mandate number was almost halved. The party nevertheless received the largest share of votes by 30 per cent. A loose coalition formed government with HD Deve Gowda as prime minister.

The structural changes in the industry were significant in the 1990s. The large state conglomerates were reduced. Instead, smaller companies emerged that largely focused on high technology. The Indian computer industry, with its Bangalore center, “India’s Silicon Valley”, showed strong growth, especially in software exports. A number of international car manufacturers began co-production with Indian partners.

On May 11 and 13, 1998, just after the change of power, India conducted nuclear tests in Pokhran, Rajasthan state. These were India’s first nuclear test blasts since 1974, leading to increased tensions in India-Pakistan relations, which responded with their own blast tests on May 28 and 30.

In April 1999, the Congress Party, the left parties and a host of smaller regional parties came together to govern the Vajpayee government. Sonia Gandhi failed in an attempt to form government, and new elections were held the same fall. Vajpayee and his National Democratic Alliance won a solid victory. The alliance included both right-wing and socialist parties, as well as regional groups.

Vajpayee further consolidated his position by another election as early as 2000. He subdued BJP’s nationalist rhetoric, pursued a liberal economic policy and gradually improved relations with Pakistan after this, especially in the years 2001-2002, had been extremely tense. A major setback for the moderate line was the religious feud in the state of Gujarat, where approximately 2,000 people, mostly Muslims, were killed during riots in 2002.

India, under the right-wing BJP regime, experienced its greatest economic growth to date. This prompted the party to run for election in 2004 under the slogan Shining India – an India radiating financial success. However, growth was very unevenly distributed. 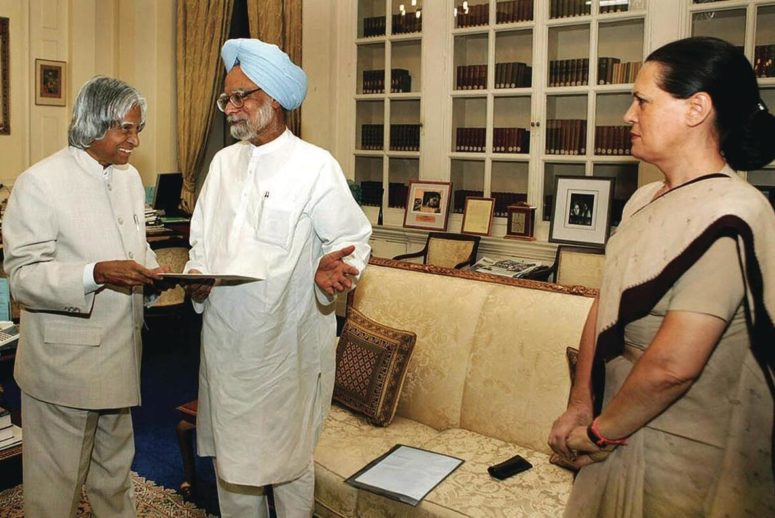 The Congress Party leader, Sonia Gandhi, received much credit when the party won the parliamentary elections in May 2004, and aroused consternation when she renounced the prime minister’s post. On May 19, President APJ Abdul Kalam (left) instead gave the order to form government to Manmohan Singh (center), while Sonia Gandhi presides over the session.

The Congress party under Sonia Gandhi won an unexpected victory in the 2004 elections, and a Congress-dominated government was formed. Manmohan Singh became the first Sikh in history to become prime minister.

After Abdul Kalam was elected India’s president and head of state in 2002, the two highest political posts in the Hindu-dominated empire were thus occupied with a Sikh as head of government and a Muslim as head of state. Kalam’s predecessor of the presidential post, Kocheril Raman Narayanan, had in 1997 also become India’s first “ceaseless” head of state. In 2007, India first got a female president when Pratibha Patil was elected president.

Singh was seen as the brain behind far-reaching liberalization of India’s economy when he was finance minister in the previous Congress government (1991-1996). From 2004, however, he led a sprawling government coalition with a total of 12 parties; some of them hostile to further economic liberalization. Greater emphasis was now placed on the fight against poverty.

During the period 2007-2008, a number of terror attacks against civilians were carried out in several places in India. During a terrorist attack in Mumbai on November 26, 2008, about 180 people were killed, including 22 foreign nationals. India claimed that Pakistani terrorists were behind the attack and this created strong tensions between India and Pakistan.

In the fall of 2010, several corruption charges were directed against members of the government, and Prime Minister Singh replaced several of his ministers. There was a major focus on corruption cases, including the Commonwealth Games held in New Delhi in October 2010.

In all the seven states of northeastern India there have been varying degrees of militia activity. In Manipur and Tripura, militants operate in rural areas. Since 2006 there have been terrorist attacks in Assam with fatalities in several cities. Military activity also characterizes other parts of northeastern and eastern India, especially the lands of Bihar, Jharkhand, Chhattisgarh, West Bengal and Odisha.

In 2010, the Maoist Naxalite movement ( Naxalites) became a key security issue in India. The movement’s struggle against the government has demanded thousands of civilian casualties. In the areas where the movement is most active, there is great extraction of minerals, but little of the gain benefits the locals. The right to land is therefore a central issue for the Naxalites.

In 2010, more than 100 people were killed in new riots in Kashmir in clashes between protesters and Indian security forces.

At the 2014 parliamentary elections, the Hindu nationalist party, Bharatiya Janata Party (BJP), won a clear victory. The party voted Narendra Modi as prime ministerial candidate, and Modi took over as India’s prime minister on May 26, 2014. Thus, the secular Congress party and Prime Minister Manmohan Singh, who has ruled India for most of the post-war period, have surrendered the government.

BJP’s election program was modernizing society and opening up the economy. The electoral victory can be seen as a protest against increasing stagnation under the Congress Party’s rule. Modi’s vision is for India to be an active and respected participant in the world community. He has maintained a high foreign policy profile and visited China, USA, Japan, France, Germany and Russia, among others, in 2014–2015.

Modi’s critics believe that BJP’s Hindu nationalist ideology can be problematic in a country with large religious minorities, both Muslim and others.

For the first time, the BJP also became a central political player in Kashmir. At the state elections in Kashmir, in December 2014, the party gained a high turnout, doubling its number of seats in the state assembly.