China has a millennial dance tradition; Known dances are performed at the court already during the Zhou Dynasty (c. 1027–221 BC). The hoop dance was further developed especially during the Tang Dynasty (618–907), when spectacular mask dances and Buddhist dance processions were included in the court entertainment. Dance ensembles at China’s imperial court took part in the ceremonial surrounding the emperor and the traditional festivities in the same way as in other court in the East. Elements of dance in theater performances are known among others. from zaqu-the plays of the Song period (960–1279), and later of the so-called Beijing Opera dance drama, which originated in the 18th century. Often these dance dramas are based on mythological or historical literary narratives. The country’s long dance tradition has also been reflected in a variety of ethnic dances. The authorities seek to promote this tradition, including in the creation of state-sponsored ensembles. Several of these have visited Europe, including Norway. Characteristic of many Chinese dances are strong elements of mimic and acrobatic nature.

Classical ballet gained a foothold in China only after the communist takeover of power in 1949, although smaller schools had existed in the interwar period. in Shanghai, run by Russian emigrants. Soviet dancers, both from Bolsjoj- and Kirov ballet helped to found ballet schools in Beijing (1954) and Shanghai (1960). The first major Chinese choreographer was Dai Ailian, who had studied at Ballet Rambert in London in the 1930s. Her ballet The Peace Pigeon also incorporated ethnic dances. Before the Cultural Revolution of 1966, the country was hosted by foreign ensembles, both Soviet and Western, and the Chinese ensembles had most of the well-known classical ballet works on the repertoire. During the Cultural Revolution, these were banned, and the only thing that was allowed listed was ‘revolutionary’ works such as. The Red Women Brigade. After the fall of the four-band, classical ballet has again had a boost, and the standard is high. 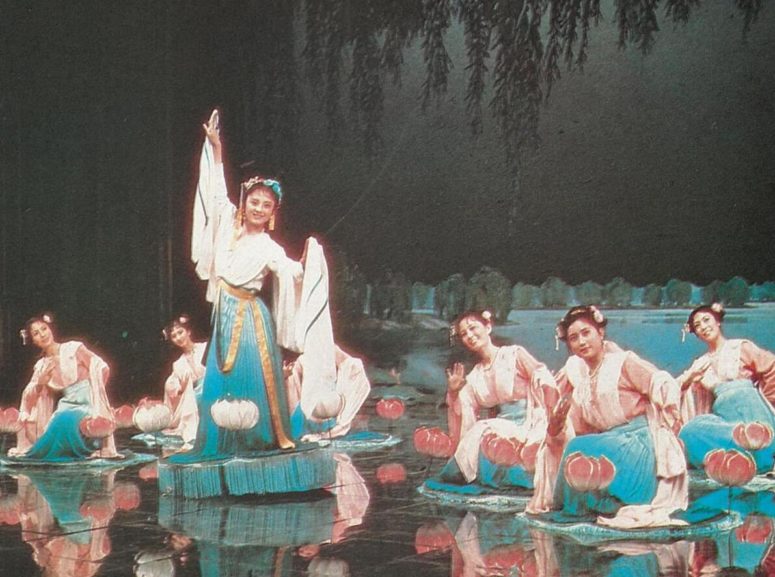 Lotus Dance. A group of young girls show how the lotus flower moves on the water surface with soft, cunning footsteps. The dance was developed from a folk dance from North Shaanxi, during the Han Dynasty. It praises peace and happiness.

The country’s two best-known classical ballet companies are the Central Ballet Company in Beijing and Shanghai Ballet. Since the end of the cultural revolution, modern Western dance forms have also found their place. Guangdong Modern Dance Company in Guangzhou, the former Canton, was founded in 1987 and gained official status in 1992. Works with Hong Kong’s renowned Contemporary Dance Company almost as one ensemble.

But of course China has its own dance tradition. Founded in 1956, the Beijing-based China Opera and Dance Drama Theater is a center for Chinese classical dance. In Chinese folk dances, too, there is a relatively marked difference between North China’s more down-to-earth style and the elegant and light dance forms found in southern China, where there are features similar to those of neighboring Southeast Asia.

Another company that has had a big impact when it comes to dancing in general in China’s PLA (the People’s Liberation Army) Arts Institute’s Song and Dance Ensemble, which has trained a number of excellent dancers, and touring throughout the country. It is not only affiliations with companies in Hong Kong that are essential to the development of modern dance in China. In Taiwan, too, the connections to the well-known Cloud Gate Dance Theater have been of great importance.