It is not possible to draw boundaries between the religious, classical and popular in Indian dance. The classical forms of dance are closely associated with Hinduism, and popular elements are found in classical traditions, for example, in the ras-purple dancing in Manipur and in the fight scenes in the kathakali performances in Kerala.

Much indicates that the oldest Indian dance was related to religion and liturgy. The Vedic priests recite or sing their verses (chhandas) accompanied by a variety of hand postures and gestures (mudras). Comprehensive liturgies may have crystallized dance dramas with a rich symbolic language of mimicry and gestures. Later, classical compositions were incorporated.

The classical dance was attended by devadas, girls who were associated with the temples at a young age. Inscriptions from Orissa show that such an institution existed in the 500s or 600s, or in ancient times it was danced in front of the godly altars and in the temple courtyard. Later, the dance has freed itself from the temples, but even when dancing in public places or on outdoor scenes, invocation of a deity belongs.

The basis of classical dance is described in Bharata’s Natyashastra from the time of the birth of Christ and several other Sanskrit texts, e.g. Nandikeshvaras Abhinayadarpana. But if all the texts had disappeared, most of them could be reconstructed after pictorial representations in the temples, e.g. Chidambaramin southern India. Bharata depicts the components of the dance: abhinaya, nritta and nritya. By abhinaya is meant mimicry, including movement of eyes and eyebrows, and hundreds of hand positions and hand movements (hastas, mudras) that symbolize words. Only a few of these are naturalistic. Most are pure conventions. So rich is this symbolic language that virtually any syntactic context can be expressed mimically. No dance is meant pure dance. Nritya is a combination of abhinaya and nritta. Together with raga (melody) and tala (rhythm), see Music in India, the dance is supposed to elicit the mental state of the spectator, who in Indian aesthetics is called rasa (see Art in India ).

Within classical dance, different styles have evolved in the different areas of India. Traditionally, four such schools are expected: two in the south (bharata natyam and kathakali) and two in the north (kathak and manipuri), but several regional schools today require: kuchipudi in Andhra Pradesh, odissi in Orissa, chhau in Bihar. 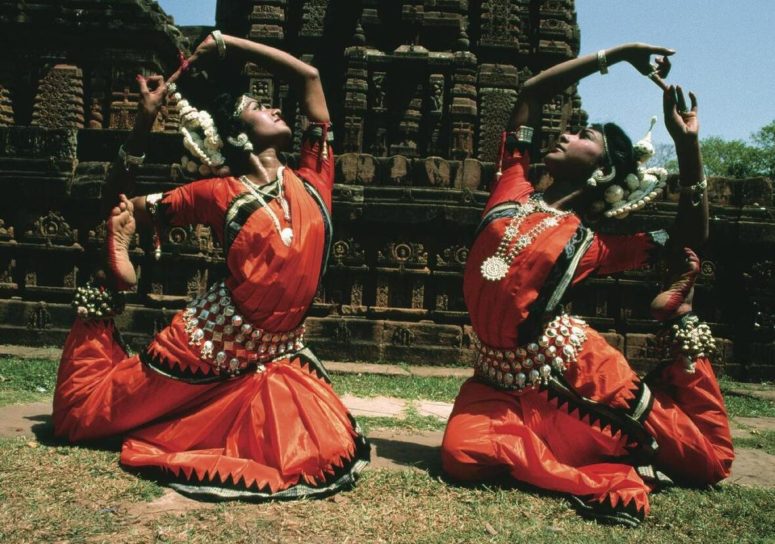 Bharata natyam, which is only danced by women, is one of the two traditional dance styles in southern India. The other is kathakali. The symbolic language, which belongs to Indian dance, is expressed through mimicry, eye movements and hand positions (mudras).

Bharata natyam, with its center in Tanjore and Madras, is named after Bharata. It is danced by women. The dance, which is not a dramatic story, but based on literary and musical compositions, has several “acts”. Often the performance ends with some classic verses without accompaniment from Jayadeva’s Gitagovinda. Closely related to the bharata is the kuchipudi and odyssey dance.

Kathak is a North Indian dance form with center in Jaipur, Rajasthan and Lucknow. This too is danced in several “acts”. It is based on a rhythmically complicated music and a virtuoso dance technique with leaps and pirates, but here too there is room for invocation and classical song compositions.

Kathakali is a dramatic opera based on dramatic narrative that developed in Kerala in the 17th century. It is traditionally performed by men. The music is played exclusively on percussion instruments.

Manipuri, the dance from Manipur, on the border with Myanmar, is unique. A ritual dance drama, Lai Haraoba, is performed over ten days in May. In it are included episodes from Shiva’s life and in his honor. But ras-lilas are also danced at full moon parties. In such an environment of folk dance, a classic, more professional style has gained a foothold. Typical of the manipuri style is that the face does not move.

There are transitional forms between classical and folk dance and popular theater, eg. chhau and yakshagana. The actual folk dances are innumerable; every district has its own. Many are associated with the passing of the seasons, the unworking and the religious parties.

Indian dance has recently undergone a renaissance. Because the devadasi institution had degenerated into temple prostitution in many places, the dance had come to a standstill and was about to expire. It was rehabilitated by dance teachers like Muttusvami Dikshitar and Rukmini Devi. South India in particular has many dance schools. In the north, it was very important that Rabindranath Tagore took up dance as a subject at Shantiniketan University and made the world aware of the dance traditions in Manipur. One danger is that dances are often shortened to appeal to a western audience, and also that many dancers study several styles and mix them.