Indonesia with its many islands and peoples holds a variety of different forms of dance. Sumatra and Java have been in cultural contact with the other Southeast Asian countries, and the dance and dance drama are characterized by Hindu and Islamic traditions on these islands. The islands in the east, e.g. Borneo and Papua, on the other hand, are more characterized by so-called primitive dance forms with an element of animism. Bali, where Hindu culture found a sanctuary when Islam conquered the other islands in the west, is especially known for its dance culture. The dance here plays an important role in all kinds of events: weddings, births or funerals. While the dance in Java was originally more related to the local Islamic principals, especially the sultan heads of Yogyakarta and Surakarta (Solo) in West Java, and thus more aristocratic in its origin, the dance drama in Bali is linked to the local popular culture.

In the Bali dance the whole body is in use, and the back is bent both backwards and sideways. In Java, it is common for dancers to have a straight back during the performance of the dance. The slow and stylized dances are characterized by intricate patterns and mudra-like gestures. They are danced by 4 to 9 female dancers. As Bali has become a tourist island to a greater extent, the various dance performances have also become more tourist-oriented, and the Bali dance has been characterized by pure dance performance. 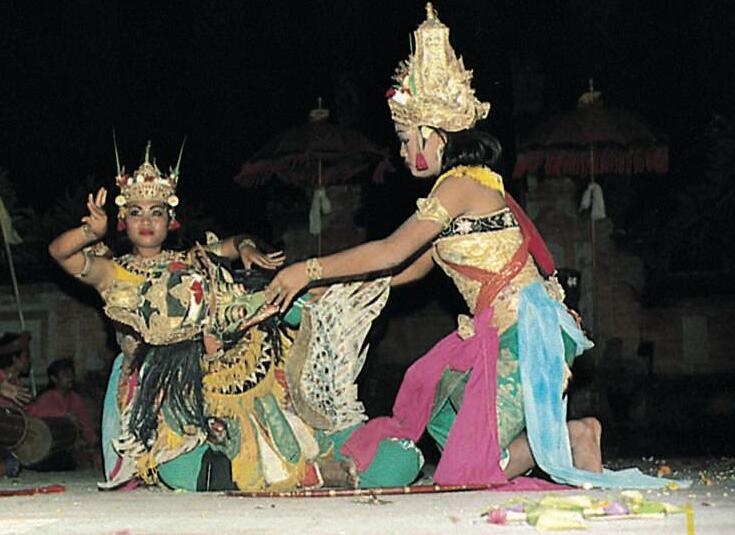 Indonesian dance drama, wayang wong, originated in the classic Indian epics about Mahabharata and Ramayana. After the Dutch took over the political power of Java after 1830, a renaissance occurred in the old court dances, and several of the sultans and members of their families were known as skilled dancers. The most famous of the court dances are bedhaya and serimpi. The most famous of the male court dances is the beksa, which was originally performed by two groups of the Royal Guard at the Yogyakarta court. The oldest dances date back to the 11th and 1100s, and are known as wayang topeng with topics from the aforementioned Indian epics. Today’s dance forms, which are often performed specifically for tourists, are called sendrtari, often called ramayana ballets.

Among the most famous dance forms in Bali is Legong, which is a pantomime dance, the most famous being the song hyang dedari, performed by two young girls outfitted with magnificent costumes and fans. There are also variations of legong where male dancers participate. Balinese dance, unlike the dances in Java, is characterized by a more popular form, centered on religious rituals and festivals, in addition to village life, although tourism plays an increasingly important role in the performance. Among the most well-known religious dances are wali dances at the Babali performances in the local and regional temple areas. Chinese and animistic influences are evident in the baron and rank the dances, where the contributors are influenced by animal spirits, and in particular many of the masks, such as. the famous lion mask, shows Chinese influence.

The Kebyar dance is an abstract dance that was developed by the legendary I Nyoman Mario in the interwar period when Bali began to become a well-known tourist destination, and which characterized new Balinese dance further in the future. Balinese dance is otherwise known for its trance-like dance forms, such as calonarang, where up to 40-60 dancers participate. Although most of the cast are amateur dancers, both Bali and Java now have public dance academies that train professional dancers and choreographers. Another form of dance drama is topeng, where the participants use different masks. Baris and ketjak are male dancers, the former a kind of ritualistic weapon dance. More romantic is ardja, a mix of singing and dancing with beautiful princesses and lost princes as the main characters.