Economy and Business in Indonesia Part 2

Until the 1980s, the production of electrical energy was mainly based on the use of oil. Since then, attempts have been made to replace oil with others, and more affordable energy sources. In 2016, coal had become the most important source of energy, accounting for 54.7 per cent of the country’s electricity production. The rest of the production was based on natural gas (25.9 per cent), oil (7 per cent), hydropower (7.9 per cent) and geothermal energy (4.3 per cent).

The industry contributes 31 percent of the country’s GDP and employs 21 percent of the working population (2017). The government has focused on increased industrialization to increase employment and export revenues. Extensive foreign investment has been established in Java and Batam to utilize the cheap labor. 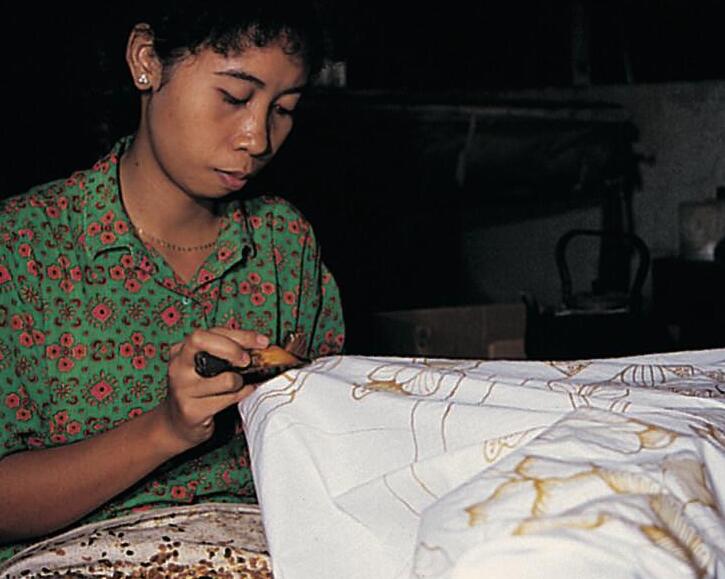 Traditional batik production in Surakarta in Java. Here, wax is laid in patterns, in fields that in the first place should not have color. 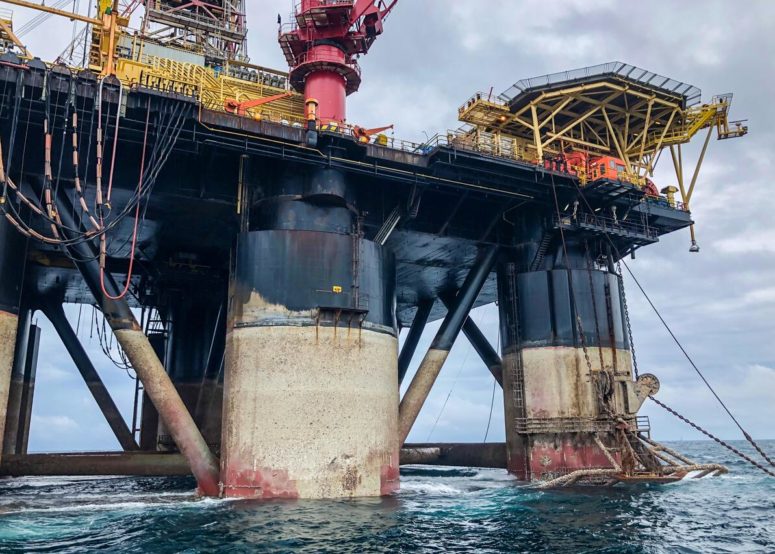 Drilling rig in Balikpapan, August 2018. Here the rig is raised so that you can see the bones that are otherwise submerged. Indonesia has a significant petroleum industry, and several cities are characterized by the petrochemical industry. The port city of Balikpapan on the southern coast of Borneo has both an oil terminal and a large oil refinery.

The most important mineral resource is petroleum products. Oil recovery began as early as the 1890s and increased very rapidly in the period following independence. The largest oil fields are in Sumatra and Kalimantan, as well as some smaller fields in Java, the Moluccas and Papua. The country hopes to be able to develop the eastern oil fields in order to maintain production levels. Indonesia is not self-sufficient in oil.

The four largest offshore natural gas extraction fields are outside Aceh on Sumatra, Bontang in Kalimantan and Tangguh in Papua, as well as on the island of Natuna between the Malay Peninsula and Kalimantan in the South China Sea. The largest coal mines can be found at Sumatra and Kalimantan. Coal production has been declining since 2017.

90 per cent of tin production takes place on the islands of Bangka and Belitung off the east coast of Sumatra. It is part of a larger tin belt ( bank tin ), but the reserves are about to be emptied. Large quantities of copper and gold are mined in the Ertsberg Mountains in Papua. Nickel mines have been opened on Sulawesi and in the northern part of the Moluccas.

The petrochemical industry with processing of the country’s crude oil and gas has traditionally been the most important industrial branch. The facilities are largely located near the petroleum deposits. Other industries include the production of artificial fertilizers and cement, as well as consumables such as textiles, clothing, food, beverages, tobacco products, furniture and other household goods, bicycles, motorcycles, radios and smaller electrical articles. The production of electrical articles has grown sharply since the late 1980s. There are also assembly plants for cars, tire production and production of agricultural implements and smaller machines.

Bandung is a technological development center with, among other things, the airline industry since 1976. The first nationally developed passenger aircraft was completed for the official 50th anniversary of its release in 1995. Apart from the purely commodity-based industry, almost all industrial production is located in Java. An exception is the island of Batam 20 kilometers southeast of Singapore, which was declared a free trade zone in 1989. On this island, Singapore has invested considerable capital in labor-intensive production to exploit the cheap labor.

Tourism is significant and is one of the country’s largest sources of income for foreign exchange. In 2018, 15.8 million tourists visited Indonesia. This was an increase of 12.5 per cent compared to 2017. The largest groups of tourists come from China, Singapore, Malaysia, Australia and Japan. About a third of tourists visit Bali, which is known for its nature and Hindu and Buddhist temples. Other major traditional tourist centers are Jakarta, Yogyakarta and Riau Archipelago, while Lombok, Sumatra and Sulawesi are gradually gaining in popularity. Fast-growing numbers are Indonesians vacationing in their own country.

Indonesia’s scattered and fragmented geography creates major transport problems. A relatively well-developed transport network exists only in the densely populated parts of the archipelago. There are railways on Java and Madura and two shorter lines on Sumatra. The total rail network is 8159 kilometers (2014). 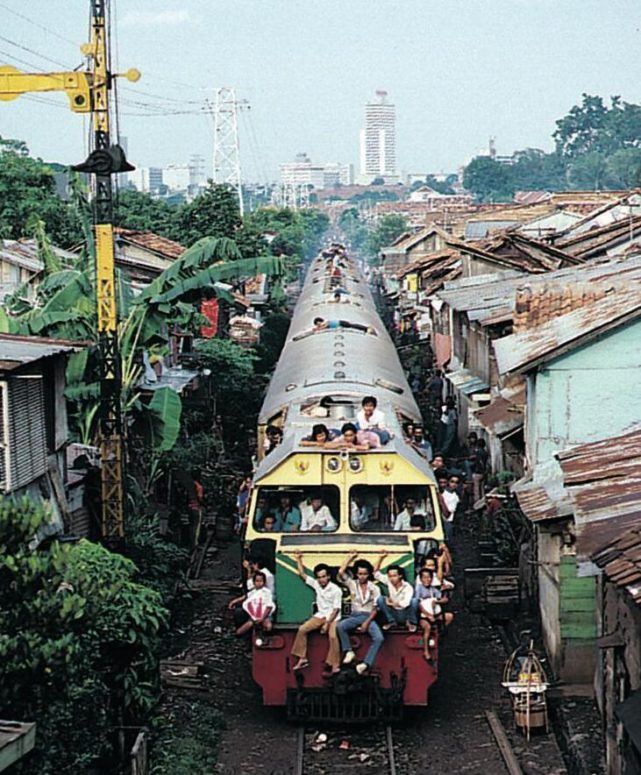 Indonesia’s rail network is to a large extent based on the facility from the Dutch. In Jakarta, where rural poor have flooded and formed large slums on the outskirts of the city, the railway line runs across the dense residential area.

The total road network is 496 607 kilometers, of which 283 102 are paved (2011). Road transport is important for local transport in the islands, and the road network is relatively well developed in Java, Bali, Sumatra and Madura, as well as in Kalimantan. Otherwise, the transport takes place mainly either by jungle trails or river boats.

Both aviation and shipping play a major role in connecting the numerous islands. There are about 80 airports with regular traffic; International airports can be found in Jakarta (Sukarno-Hatta), Surakarta in Java, Denpasar in Bali, Medan and Pekanbaru in Sumatra, Makasar and Manado in Sulawesi, Kupang in Timor, Ambon in the Moluccas, Biak in Papua and Batam. Sukarno-Hatta airport is the largest airport in the southern hemisphere.

The main port cities are Tanjung Priok at Jakarta, Tanjung Perak at Surabaya, Batam in the Rieu Archipelago, Belawan near Medan, Makasar on the southwest coast of Sulawesi and Sorong in Papua. 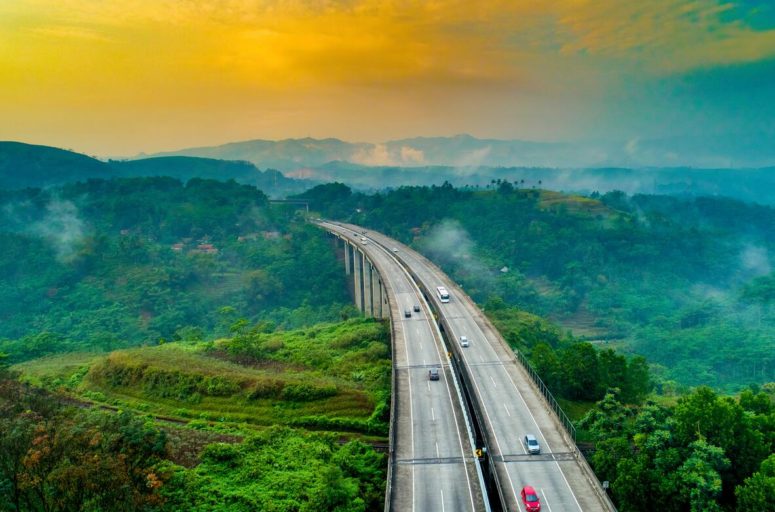