Economy and Business in Indonesia

With a gross domestic product (GDP) of US $ 1042 billion, Indonesia is the world’s 16th largest economy (2018). Indonesia, which participates in the G20, is part of the Pacific region’s economic growth region. In all the years from 2016 to 2019, the country’s GDP increased by more than five per cent. In Southeast Asia, however, GDP per capita is higher in Singapore, Brunei, Malaysia and Thailand than in Indonesia.

The Dutch colonial government, which had ruled Indonesia since the 19th century (see Indonesia’s history ), left a business in ruins when the country became independent in 1949. The period under the first president Achmed Sukarno was characterized by turmoil and economic mismanagement. From 1965, the economy has been largely governed by an alliance between the military and economists trained in the United States. In the first period after independence, there was a strong focus on the development of agriculture. Later, the main focus has been more on the development of the industry.

With the large oil revenues in the 1970s and 1980s, large foreign borrowing for investments also followed. Indonesia currently has the third largest foreign debt of developing countries, but still avoided falling into a heavy debt trap, as happened with other populous oil nations. The economic development is characterized by strong state governance and ownership. Falling oil revenues led to a need for restructuring of the economy, and the authorities therefore started a deregulation program in 1986, which is, however, slowing down.

One problem is that the economic growth center is largely concentrated to Java and especially to the capital Jakarta. The outer islands have, in part, only served as raw material suppliers to the Java industry. The country’s deficient infrastructure is also an obstacle to increased economic growth.

During the period 1985-1988, there were radical changes in Indonesia’s business sector. The state’s role in economic life was greatly diminished, and several countries invested in Indonesia. The oil, which has long been the mainstay of Indonesia’s exports, was given less importance, while simple industrial products became more important. In 1998–1999, Indonesia was hit by the financial crisis and very high inflation. Unemployment rose, and the price of ordinary foods rose tremendously. At the same time, the country was hit by a prolonged drought, which resulted in small crops and food shortages. The combination of food shortages, food price increases and frustration over the country’s situation triggered fierce protests. In 1999, an improvement in the economy began. This has led to the proportion of the population living below the poverty line being reduced from 18.4 to 9.4 per cent in the period from 1999 to 2019.

Agriculture is an important trade route. Indonesia is

Economically, rice is the most important product. Then comes the cassava and corn. Rice cultivation takes place all over the country. Indonesia was the world’s largest rice importer in 1974, but the country has since managed to reduce rice imports through schooling of farmers, subsidizing fertilizers and introducing new high-yielding rice varieties. The fertile volcanic areas of Java, Bali and western Lombok allow the “sawah method” where wet rice (sum price) is grown on flooded rice fields, often built up in terraces, with intensive and complex irrigation systems. Rice is grown primarily during the rainy season. In the drier times manioc or corn is often grown. In the outer islands, the soil is much less nutritious. 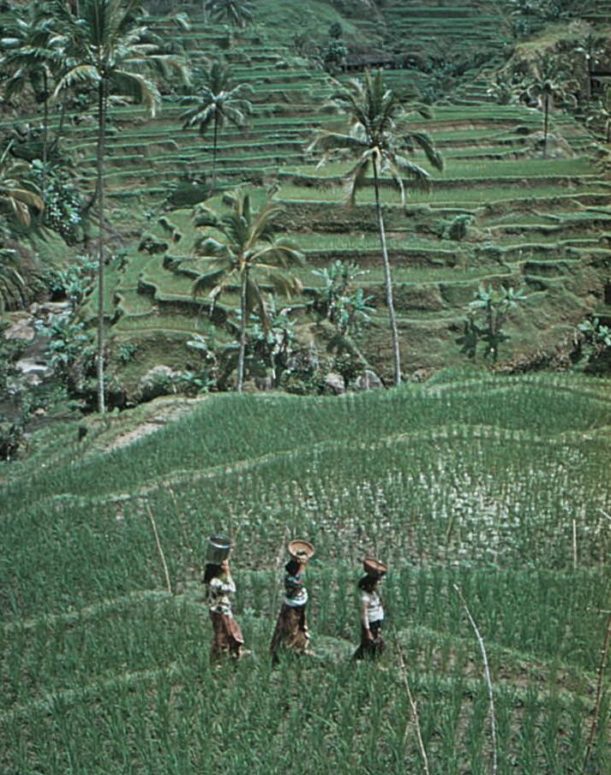 The country’s most important agricultural product is rice, which is usually grown on artificially landscaped terraces. With the help of duct systems, the water is led from terrace to terrace.

Palm oil is produced in several parts of the country and is considered a growth industry. Coffee is mainly produced in South Sumatra and East Java. Indonesia is also an important spice producer, including nutmegs. Other important sales products are tea, cocoa, tobacco, bananas, coconut products, sugar cane and orchids. 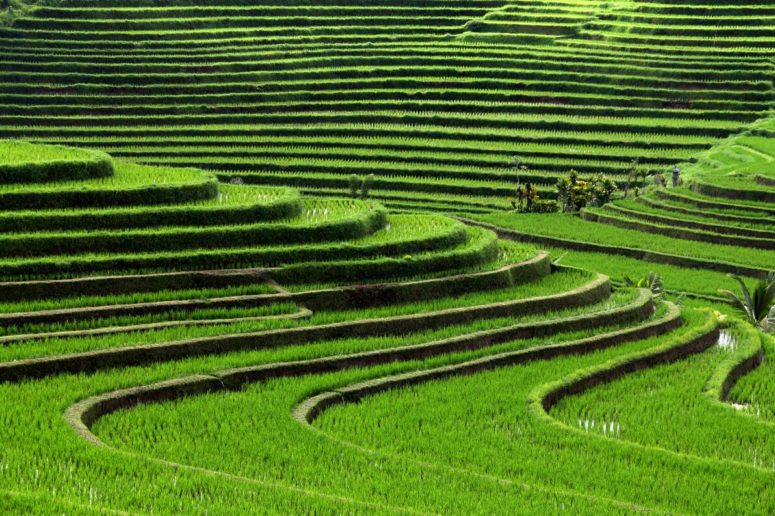 Rice terraces in Bali. Indonesia’s most important agricultural product is rice, which is usually grown on artificially landscaped terraces. With the help of duct systems, the water is led from terrace to terrace.

About 60 per cent of the country’s area was wooded in 1995. In 2016, that figure had dropped to 49.6 per cent. Indonesia has the world’s third largest tropical rainforest. With about a million square kilometers, it is about three times larger than the whole of Norway. Every year, one million hectares disappear, that is, one percent of the forest from the land. Norway and other countries are working to get the country’s authorities to reduce deforestation. 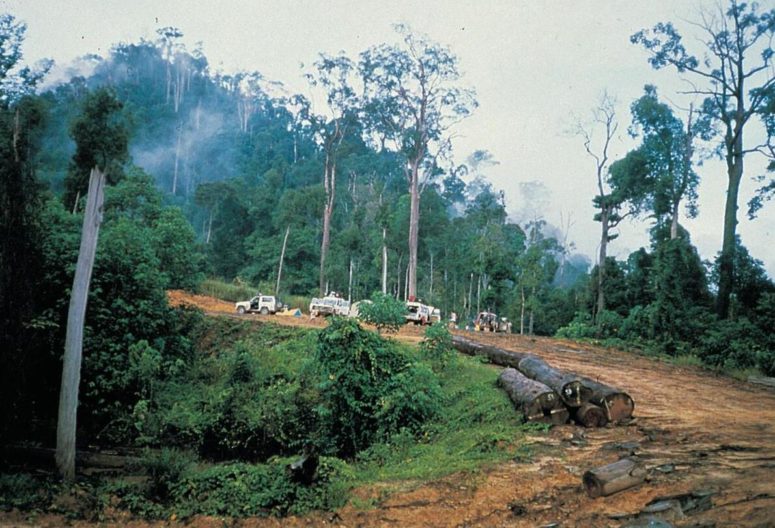 Indonesia’s large rainforest areas are under pressure from the country’s forestry industry.

In 1978, Indonesia’s logging accounted for over half of the country’s exports, and it was the country’s second-largest source of revenue after oil. The felling in many places created increased erosion and other environmental problems. In 1985, therefore, a ban was imposed on exports of unprocessed timber. In 1992, the ban was replaced by an export tax on forest products. However, most of the logging is used for fuel.

Most of the logging is run by large lumber companies closely associated with the political elite. Residents in areas with a high impact are threatened with their livelihoods, and in many cases conflicts have arisen.

There have been frequent forest fires in various places in Indonesia. The most affected have been the Riau archipelago as well as parts of Borneo and Sumatra. The smoke from these fires caused significant health problems not only in Indonesia but also in Brunei, Singapore, Malaysia, Southern Thailand and the Philippines.

Indonesia is the world’s second largest fishing nation after China. This is largely due to the fact that the country has more than 17,000 islands, a coastline of just over 54,000 kilometers and a large maritime territory. Indonesia is also the world’s second largest fish farming nation after China. Total seafood production increased from 12.2 million tonnes in 2015 to 25.32 million tonnes in 2019. During the same period, fish exports increased from 3.9 to 6.5 million tonnes. The fishing resources in the shallow islands are large, and the cultivation of wet rice is partly linked to fish farming. Sumatra has the largest proportion of the country’s freshwater fish farms. 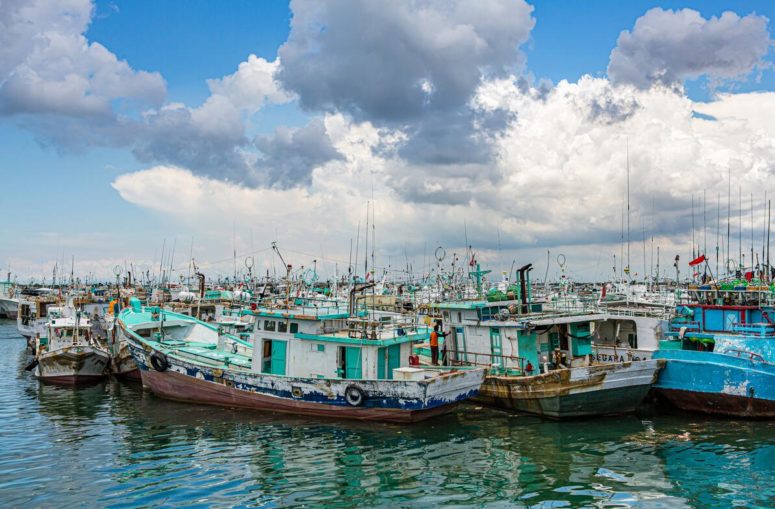 Commercial trawlers owned by Chinese and Indonesians in joint ventures account for about a quarter of the total catch. This has created conflicts with traditional fishermen. Therefore, in the 1980s, trawling was banned around most of the coast in the far east. Illegal fishing is still common in the Moluccas and some other places.