India covers an area equivalent to about a third of Europe’s size. This large land area can be geographically divided into three well-defined main regions: the Deccan Plateau in the south, the northern Indian lowlands and the Himalayas.

The Deccan Plateau encompasses the central part of the Indian Peninsula. It formed part of the continent of Gondwanaland in ancient times and the Middle Ages, along with Africa, Australia, Antarctica and most of South America. It was not until the tertiary that Deccan was completely divorced from this mainland and gained its current position after moving to the northern continent of Angaris (Asia). 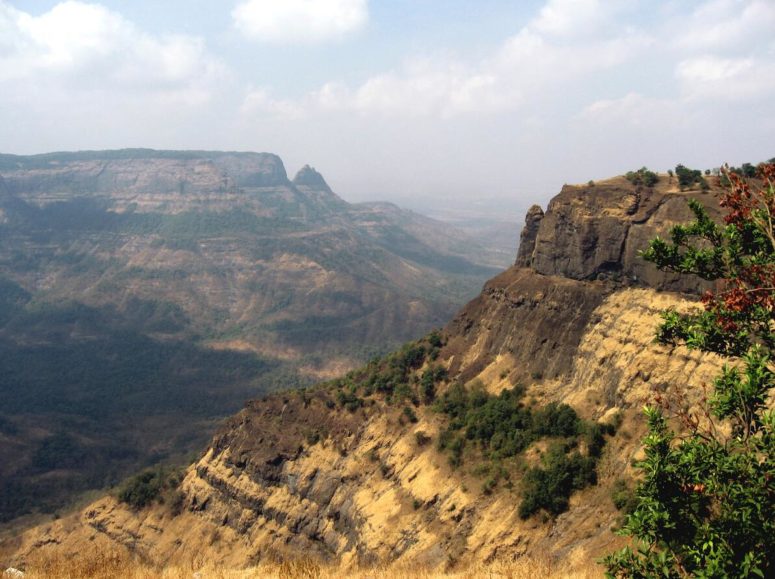 The plateau consists of Precambrian rocks, granites, gneisses and crystalline shales, which make up the remains of heavily transformed and degraded mountain ranges. Over these rocks are slightly folded, less transformed sediments. At the bottom lies a mighty conglomerate layer, locally over 6,000 feet thick; followed by deposits of sandstone, shale and limestone, probably formed at the transition between the Precambrian and Cambrian. In the tertiary, Deccan experienced vigorous volcanic activity with the outflow of vast amounts of basaltic lava. The basalt areas cover over 500,000 square kilometers in the northwest of the peninsula, with a thickness of up to 3000 meters.

The 350-600 meter high Deccan Plateau is bounded on the west and east by the Ghats Mountains. The Western Ghats reach approximately 1500 meters above sea level and rise terraced from a narrow coastal plain, which becomes somewhat wider in the north by the Gulf of Khambhat, where the Narmada and Tapi rivers have built up deltas. The Eastern Ghats are the common name for the lower and less prominent hill parts that form the plateau’s fractured eastern edge. The Western and Eastern Ghats run all the way to the south in the Nilgiri Mountains (2636 meters above sea level). A deep recess, Palghat Gap, separates these from the Anaimalai mountainsat the southern tip of the peninsula, where Anai Mudi (2695 meters above sea level) forms the highest point of the Deccan. As the highest part of the Deccan Plateau lies to the west and south, almost the entire peninsula has a drain eastward through the Eastern Ghats to the Bay of Bengal. The coastal plain is much wider in the east, and large rivers such as Cauvery, Krishna, Godavari and Mahanadi have built up vast deltas.

The “real” Deccan is bounded to the north by the approximately 1,000-meter-high mountain range Satpura Range. Together with the Ajanta Range and the Chota Nagpur Plateau, these mountains form an important west-east-going border line, which has culturally and physically hindered the links between northern and southern India. The Satpur mountains are separated by the deep and 40-65 kilometer wide Narmada Valley from the Vindhya Range. These mountains are 600-800 meters high and form the southern boundary of the Malwapatå, which geologically must be regarded as an offshoot of the Deccan.

The plateau is made up of lava and drained by the Chambal River, and in the north goes unnoticed into the north Indian lowlands. The plateau rises northwest towards the Aravalli Range, which forms a distinct front towards the underlying Thar Desert, which extends towards the Pakistan border. South of Thar, the vast swamps of Rann of Kutch form the border with the Kathiawar Peninsula, which is a rocky semi-desert mainly made up of lava. 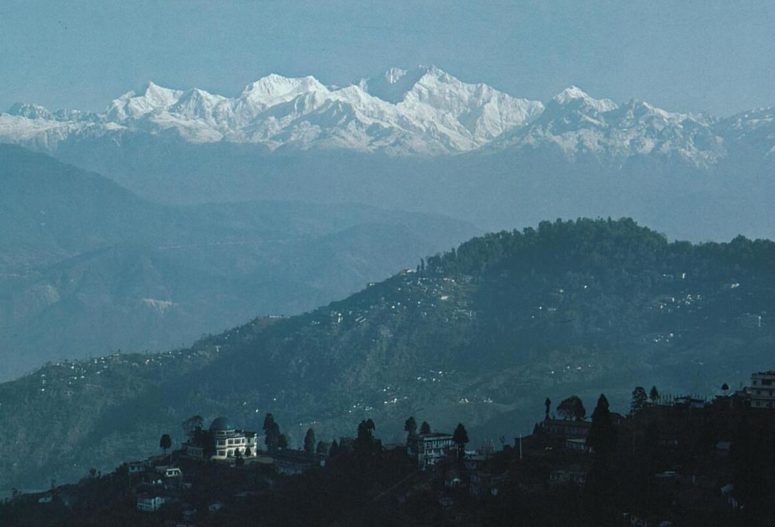 Darjeeling Valley, near the border with Nepal. In the background Kanchenjunga (8598 m), India’s highest mountain and the third highest in the world. The Himalayas separate the Indian subcontinent from the rest of Asia, and the mountain range rises steeply from the northern Indian lowlands in three marked steps.

The lowlands extend from the border with Pakistan in the west to the Bay of Bengal in the east. It has an average width of between 250 and 300 kilometers, and is bounded to the north by the Himalayas and to the south by the Malwapa Plateau and the Chota Nagpur Plateau. The lowlands are covered by parts of the three major river systems, Ganges, Indus and Brahmaputra. Originally it formed as a massive crust of the earth’s crust at the same folds that formed the Himalayas, and was later filled with sediments up to 10,000 meters thick.

Geologically, it is possible to distinguish between older and clay sediments (bhangar) which make up the higher parts of the plain, and the lower terrain consisting of younger and more sandy deposits ( khadar ). Between bhangar and khadar, there is usually a difference in height of about 60 meters. Topographically, the northern Indian lowlands consist of an almost flat, low lying land area, where river valleys or levies are among the few natural phenomena that break the uniformity of the flat landscape. 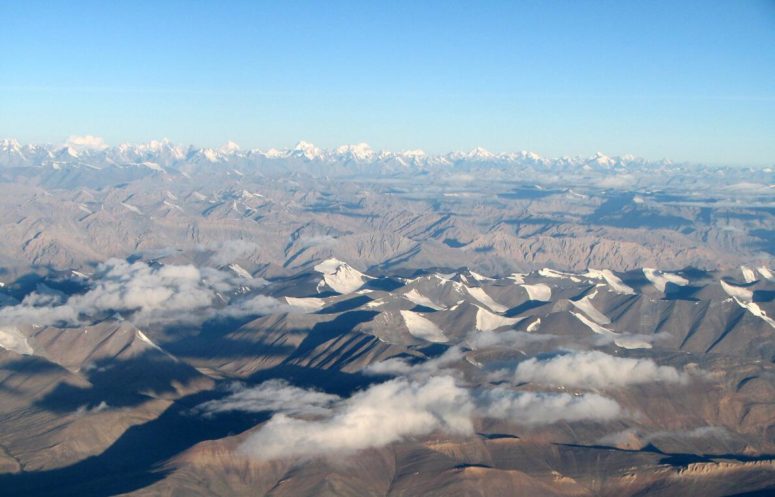 The Himalayan mountain range is the main part of the “wall” that separates the Indian subcontinent from the rest of Asia. The mountain range, which is the world’s highest with more than 90 peaks over 7500 meters, extends for a length of about 2500 kilometers. It is formed as part of the great tertiary fold, which also includes the Alps. The mountains are made up of rich fossil-bearing sea deposits of age from Cambrian to Tertiary, but also to a large part of strongly transformed crystalline rocks. The rocks are heavily collapsed, and large excesses have been detected. The mountains rise steeply from the northern Indian lowlands in three marked steps. The lower part consists of the 1000–1500 meter high Siwalik Hills, the middle of the Little Himalayas, where the altitude varies between 1800 and 3000 meters, and the top of the rugged Great Himalayas.

Only the eastern and western parts of the Himalayas are within India’s borders. In the east, the mountains form the so-called North East Frontier ( Arunachal Pradesh ), which is almost completely cut off from the rest of India by Bangladesh. The connection with India is secured through the approximately 850 kilometers long and 100 kilometers wide Brahmaputra valley, which geomorphologically belongs to Gangessletta. The eastern Himalayas rise up steeply from the plain, with altitudes of 3000-4500 meters above sea level. Highest here is Kangto (7090 meters above sea level) on the border with China.

In the far east, the Himalayas swing south, forming the Patkai Hills on the border with Myanmar, and continue into Myanmar. The average height here is about 1500–1800 meters above sea level, and few peaks reach higher than 3000 meters above sea level. The Assam Plateau, which is composed of the approximately 1500 meters high Garo, Khasi and Jaintia Hills, is an offshoot of the Deccan Plateau and deviates purely geologically from the adjacent mountainous areas.

Also Kashmir furthest north of India and the area between Kashmir and Nepal belong to the Himalayas. The northern two-thirds of Kashmir consist partly of rugged and high mountain ranges, with peaks above 6,000 meters, and partly of mountain plateaus at 3500-4500 meters altitude. The highest mountain in the Indian-controlled part of Kashmir is Nunkun (7135 meters above sea level). 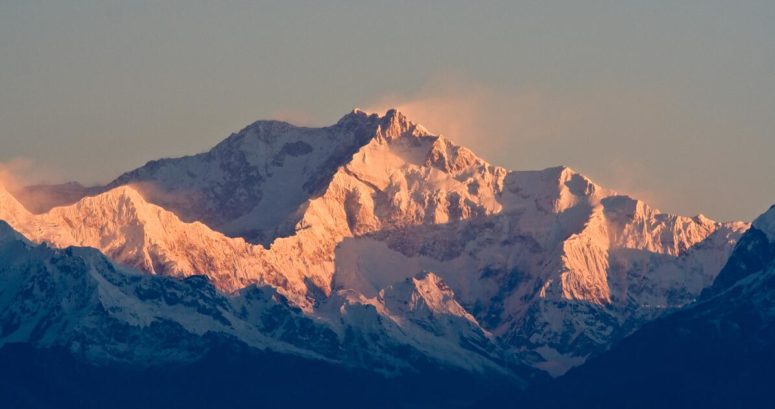