Guangzhou is one of China’s largest cities, the capital of Guangdong Province, located at the heart of Zhu Jiang ‘s (Pearl River) delta region, 135 kilometers northwest of Hong Kong. The metropolitan area covers an area of ​​3843 km² with 12,458,000 inhabitants (estimate for 2015, UN Population Division). The city manages an additional eight districts and four counties; a total of 7434 km².

Guangzhou is southern China’s most important economic and cultural center, and largest city. Thanks to its location, the city has a historical tradition as one of China’s most important trading cities, and has been a gateway to contact with foreign countries. Today, Guangzhou acts as a coordinator in the very rapid economic development that has taken place since 1979 in the Pearl River Delta. The industry includes the cotton and silk industries, tanneries, sugar refining, cement and paper mills, food processing, electrical and electronic industries, chemical industry and iron and steel mills. 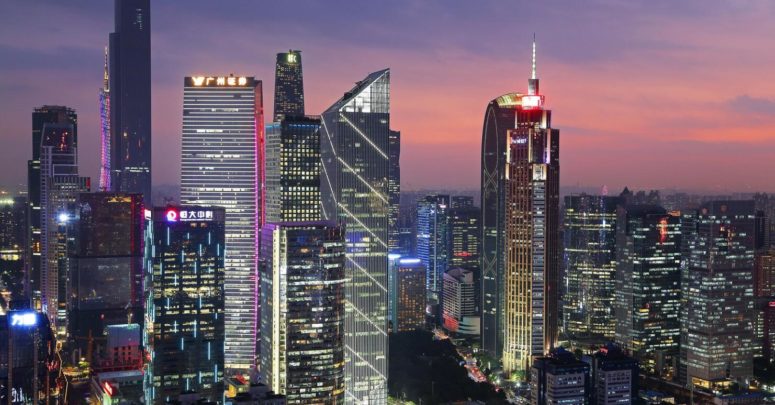 Transport is undergoing rapid development. Guangzhou is affiliated with Hong Kong, Macao and Shantou by highway and Hong Kong with a high-speed railway. The international airport is considered China’s third most important after Beijing and Shanghai. The city’s river port is only open to ships that are a maximum of three meters deep, but the port of Huangpu, 32 kilometers southeast of the city center, can take ships of up to 10,000 tons.

Guangzhou is the seat of several universities and other higher education institutions. There are a number of museums and other cultural institutions, including several revolutionary museums and monuments, as well as a botanical and zoological garden.

The settlement extends on both sides of the Zhu Jiang (Pearl River). The northern part of the city is the oldest. It had previously narrow and winding streets and was, until 1921, surrounded by tall brick walls. Large parts of the old town were later rebuilt and modernized. Famous buildings include the beautiful memorial hall of Sun Yat-sen (Sun Zhongshan), the 82-meter-high “flower pagoda” (Hua Ta), the Buddhist – the Liu Rong Si Temple, the Zhen Hai Lou View Tower, built in 1380, today the City Museum, and the 191-Revolution Revolutionary Heroes Monument. The European-style stately buildings are now used, among other things, for public offices and foreign legations. On the south side of the river are newer industrial and residential suburbs. Until 1960, about 300,000 of the city’s inhabitants lived in houseboats moored along the riverbank.

Guangzhou, originally the capital of the kingdom of Nan Yue, was conquered by Emperor Han Wudi (汉 武帝) and made Chinese province in the year 111 BCE. It gained trade with Indians and Arabs. In 1516, the Portuguese came to the city, which became the center of European trade with China. Englishmen, Dutchmen and Frenchmen also consulates here. After the first opium war, which was based on the seizure of opium from English and American ships on the Pearl River, the city became a treaty port in 1842. The second opium war also started here. Guangzhou was a center of the revolution in 1911 and the Kuomintangs (Guomindangs) capital between 1917 and 1926, until the march north as United China. In the years 1938-1945 the city was occupied by the Japanese. After Chongqing’s fall in 1949, Guangzhou was captured by the Communists in October of that year. The historical ties with abroad and the close relations with Hong Kong have created a more Western culture and atmosphere than in any other Chinese city.