India fascinates (almost) everyone at least after the well-known Bollywood films. But it is also becoming increasingly popular as a holiday destination. India offers a huge variety, from beautiful beaches to magnificent palaces and impressive landscapes. With such a selection there is something for every vacationer.

India, like other holiday countries on the Indian Ocean, has almost 5,000 km of coastline. But not just any beaches, no, there are some of the most beautiful beaches in the world. Whether surrounded by palm trees or simply endless beaches in golden sand, here dreams come true and invite you to relax. Well-known beaches are Goa and Kovalam, for example. The most famous monument in the country, which is probably part of the program on every tour of India, is of course the Taj Mahal, which the Indian great Mughal Shah Jahan had built in 1651 for his favorite wife Mumtaz Mahal. She died when the 14th child was born and the Mogul built this magnificent palace out of grief. The surrounding gardens also invite you to linger and relax.

India has so much to offer that it is not at all easy to decide whether you want to spend a beach holiday, a sightseeing holiday or another activity holiday there.

One thing you should definitely do when visiting India. No, not petting an Indian elephant, that would also be a great change, but a visit to a spice market in India should not be missed. The many smells of different spices and herbs are an unforgettable experience. Also of particular interest are the various uses for which the plants sold here can be used. Most offers are not only suitable for seasoning dishes. An herb has also grown in India for the most secret wishes or for the treatment of injuries and pain. If you want to take such plants, whether dried or prepared, with you from your vacation in India, you should first find out about the customs regulations. Some plants are not allowed to be imported into the EU.

Form of government: India has been a Federal Republic since 1950 and is represented in the Commonwealth. The constitution dates from the same year. The bicameral parliament consists of the House of the People ( Lok Sabha) with 545 members and the Council of States ( Rajya Sabha ) with max. 250 members together. The head of state is elected every five years by an electoral college. India has been independent of Great Britain since August 15, 1947.

Language: Hindi is the national language in India and is spoken by around 30% of the population. English is the most important language in political and economic life. There are 21 equal, official languages ​​in the country, including Bengali, Bodo, Dogri, Gujarati, Kannada, Marathi, Malayalam, Nepali, Punjabi, Sanskrit, Tamil and Urdu. Hindustani is a common variant of Hindi / Urdu but not an official language.

The neighboring countries of India are in the northwest of Pakistan, in the north and the autonomous region of Tibet ( China ), Nepal and Bhutan and in the east of Myanmar and Bangladesh. The north of Kashmir has been under Pakistan’s control since 1949, so there is no longer a border with Afghanistan.

The entire coastline of India is approximately 7,000 km. In the west of India is the Arabian Sea, in the east the Bay of Bengal, in the south the Indian Ocean.

Upstream island groups also belong to the national territory of India. About 300 kilometers to the west of the Malabar coast are the archipelagos of the Amindives and Lakkadiven as well as the island of Minicoy. The Nicobar Islands and the Andaman Islands are in the southeast, between 1,000 and 1,600 km from the mainland.

There are also two independent island states off the coast: Sri Lanka in the southeast and the Maldives in the southwest.

The extreme north-east of India is only connected to the heartland by a narrow strip of land between Bhutan and Nepal and Bangladesh.

India can be roughly divided into three regions: the Himalayas, the world’s highest mountain range, in the north and northeast. It forms the natural northern and northeastern border of India. In the far northwest, the Himalayas are separated from the Karakorum by the Indus Valley.
In the south of the Himalayas, the wide and fertile plains of the rivers Ganges and Brahmaputra join. To the west of the Ganges Streamland is the Thar Desert, which is bounded to the east and south by the Aravalli Mountains. The salt marshes of the Rann von Kachchh and the Kathiawar peninsula extend to the south of the Stromland.

The Dekkan highlands cover much of India. The highlands are separated from the Ganges plain in the north by the Vindhya and Satpura Mountains. The border in the west is the western Ghats up to 2,700 m high, the eastern border is the flatter eastern ghats. Western and Eastern Ghats meet in the south. While the Western Ghats descend steeply to the Konkan and Malabar coasts on the Arabian Sea, the Eastern Ghats pass more gently into the coastal plains on the Gulf of Bengal.

The highest peak in India at 8,598 m is the Kangchendzönga in the extreme west of Sikkim in the border region with Nepal.

This map of the population distribution in India was created by the Worldmapper team. Densely populated areas appear bloated, the area of ​​sparsely populated areas is reduced. The shape of the grid has been preserved; an underlying map with the original geographical extent helps interpret the map. The distorted map should help to present abstract statistical information clearly. 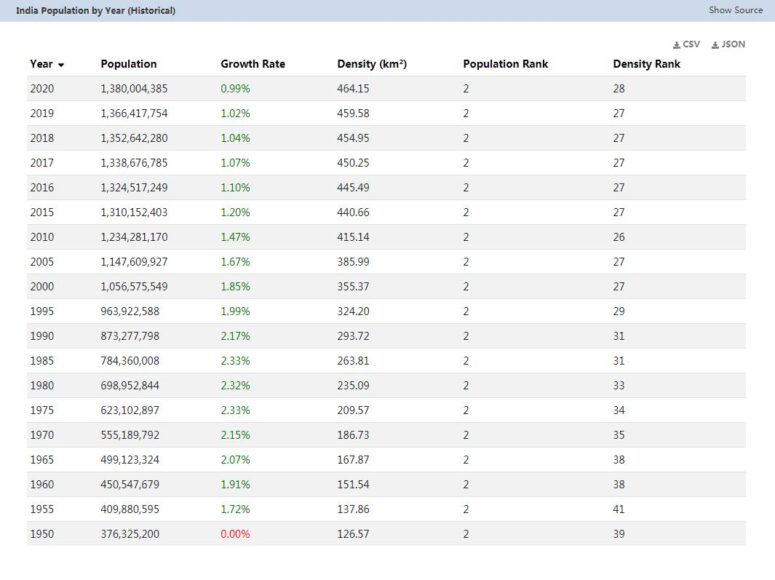