Bharat, which India is called in Hindi, is a large country consisting of 29 states. There are wide variations in food, culture, climate, language and traditions from state to state. “Indian cuisine” is a collective term used abroad, but food can vary greatly from north to south and east to west.

Indian dishes are often colorful and have a lot of taste and aroma. Many of the traditional dishes have multiple features or are similar, but they may have varying names or local customizations. 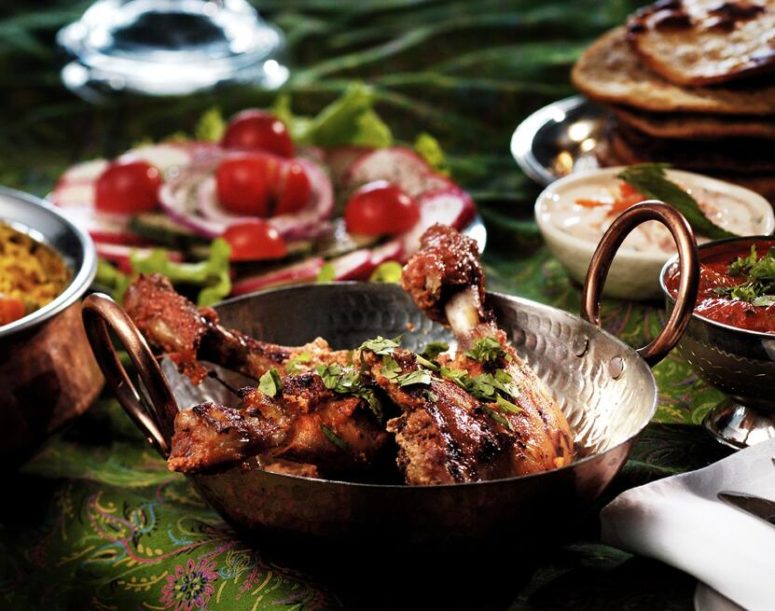 Tandoori chicken served in steel dish together with nan and vegetables.

The spice use in Indian cooking is extensive. Everything from drinks to desserts and all kinds of meals contain spices. Spices and herbs are used whole, ground to powder, dried or mixed with other spices to get a mixing spice. Some spices are heated before they are painted to produce extra good aroma.

Spices and herbs have long been used as a treatment for the body and the intake of natural antioxidants, and this is the starting point for the powerful spice use, not primarily the taste. 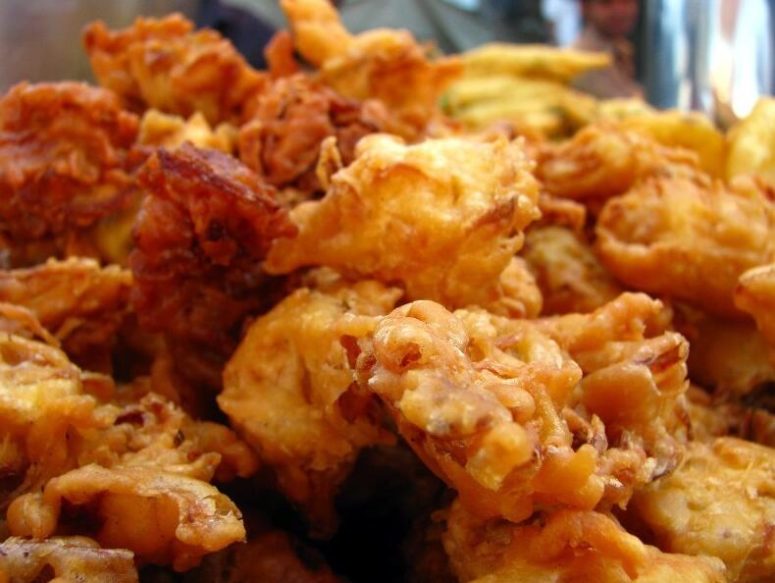 The Indian cuisine is composed. It is full of dishes with lentils, beans and vegetables as well as chicken, goat, fish and scampi. Rice, chutney, raita and different breads are natural accessories in a meal. In addition to spices are used, among other things, a lot of onions, tomatoes, ginger, chili and coriander.

Bread is widely used, and there are many varieties, for example with coarse flour, chickpea flour, millet, corn flour, amaranth flour or wheat flour. They can be fried in oil (pori), fried in a frying pan ( chapati; the daily bread) or baked in a tandoor ( nan = party bread).

Ayurveda (the doctrine of life) recommends using six flavors in the daily food intake to create a good balance in physiology. The six flavors are sour, sweet, salty, strong, bitter and umami. In a perfect meal you will find these flavors in for example sour pickles, sweet chutney, strong chili, bitter spices and umami in turmeric. In addition, the meals are balanced with a touch of sour milk in the form of a raita, lassi or dip. 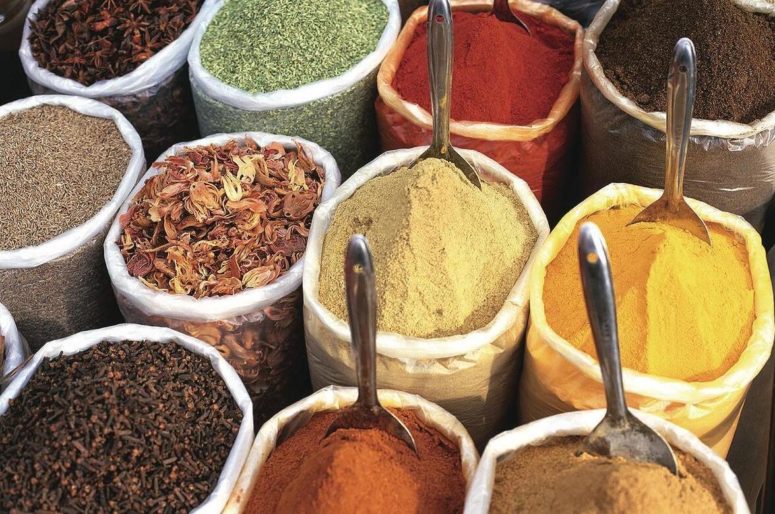 The most common meat in Indian cuisine is chicken, goat and lamb. Pork is little used in most of India, both because Muslims do not eat it and because the pig is seen as an unclean animal by non-Muslims as well. In Western India, however, some pigs are consumed, inspired by Portuguese cuisine.

Cattle are very little eaten, because the cow is considered a sacred animal. Indians still eat a lot of milk products, because the cow likes to give milk, and this is one of the biggest sources of protein for both vegetarians and non-vegetarians.

Seafood such as fish and scampi is also widely used, especially in southern India.

Indian cuisine is one of the world’s best when it comes to vegetarian food. There are countless variations and a considerable variety if you do not want meat proteins.

Lentils and beans have deposits of Indian daal. These are often daily supplements in some form, even for those who eat meat. They are a central part of the meals and often a good lunch with rice, because rice and beans together provide a full intake of proteins, amino acids and carbohydrates. 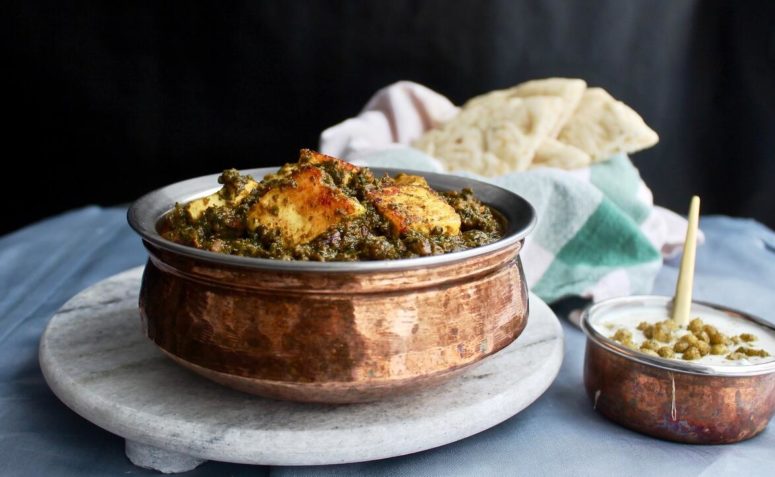 The food is usually served as a combination of several dishes in a meal, a bit like tapas. Several different light dishes are served in a dish called thaali. The food, which is usually served on steel dishes with small bowls, is basically consumed with the right hand and tablespoon, not the knife and fork.

When eating by hand, this gives the tradition a correct focus and presence for the meal you put in. Steel is used for crockery and cutlery because it was considered “clean” and easier to keep away from bacteria.

In the old days, people sat on a blanket or pillow in a tailor’s position and ate. According to Ayurveda, this will mean that you eat less and get better digestion than when you sit and eat on a chair. 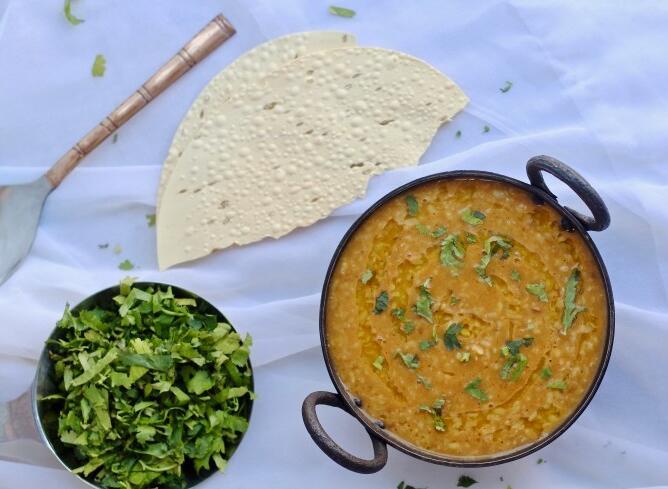 Lentils and other legumes are widely used in Indian cuisine. Here is a lentil soup served with papadam (flat bread) and salad.

India is one of the oldest civilizations in the world. The population is descended from tribes from the Indus Valley. From there, people migrated on to South and East Asia.

India previously covered both Pakistan and Bangladesh, therefore, there are several similarities with Indian food culture in these countries. The same applies to other neighboring countries such as Nepal, Iran, Afghanistan and others.

India was long sought after by the abundant supply of goods such as spices, teas, cotton, leather, silver, gold and precious stones. The Silk Road was a popular route that made many foreigners establish themselves in India to trade. This influenced traditional Vedic cuisine and was inspired by new impulses. You will also find, for example, Portuguese-inspired dishes in Western India and coffee beans in Southern India.

Different parts of the country

If the country is roughly divided into four zones, it can be defined as follows:

The North Indian cuisine is characterized by special dishes from Punjab, where tandoori, nan, panir and butter chicken are central. As this is known as a gourmet kitchen, these dishes are found almost in all restaurants both in and outside India.

Traditionally, the population was largely farmers with their own cows and rich access to dairy products such as cream, yogurt and ghee. Basmatiris is said to be so aromatic and good in taste due to the clean waters of the Himalayan rivers and fresh vegetation. There is a rich variety of bread varieties in this part of the country, as there is a lot of farming with great access to milk and cultivation of several cereals and vegetables.

Southern India is characterized by dishes made from fish and scampi, since the coastline abounds with these. The fishing industry is central and the houseboats are popular tourist destinations. Even vegetarians eat seafood because of the natural coastal access. There is plenty of access to coconuts, so most dishes are made with coconut oil, coconut pulp or coconut milk.

Dairy products, bread and cereal products are little used. The large rice production makes rice flour a more natural and very popular source. Dosa, a kind of thin and porous pancake, is highly sought after in eateries throughout India.

The cuisine in the western part of India is characterized by pork dishes, vindaloo and other popular Mumbai and Goa dishes with tropical vegetables and fruits, combined with fish dishes and inspiration from Portuguese innovation, including the use of wine.

The East Indian cuisine is very different from the traditional dishes known as Indian cuisine from restaurants in the West. Different types of fish curry and cooked rice are central. The flavors are also somewhat inspired by Mongolian and Chinese cuisine with few spices and simple dishes. Otherwise, the region is most recognized for its sweet desserts. There are fewer vegetarians here than anywhere else in India.

Some concepts and dishes