In no country in the world are the tropical rainforests disappearing faster than in Indonesia, often due to illegal logging. Estimates amount to 8,400 square kilometers, with most of the Indonesian primary forests already destroyed. Between 1990 and 2020 alone, the forest area decreased by more than a quarter. Numerous animal and plant species that contributed to Indonesia’s high biodiversity are now extinct.

Major forest fires occur in Indonesia almost every year. The extent of these forest fires continues to increase due to the deforestation. The 2015 forest fires were the worst in many years. Around 120,000 Indonesians had to seek medical treatment for respiratory illnesses. The neighboring countries Singapore and Malaysia are also affected. The Center for International Forestry Research estimated total damage to forests, agriculture, health, transport and tourism at $ 14 billion. This made the 2015 fires the world’s most expensive environmental disaster of the year. The scale of the 2019 fires was similar.

Targeted slash and burn operations by palm oil companies contributed to the fact that Indonesia, the world’s largest palm oil exporter, is now the third largest in the world in terms of carbon dioxide emissions after the USA and China. Large-scale palm oil plantations are often created on the slash-and-burn areas, which have made Indonesia the world’s largest producer of palm oil. This palm oil is mixed into “biodiesel”, for example. After protests by environmental associations, the EU Parliament decided to ban palm oil as a basis for biofuels until 2021. In addition, cleared wood is used in paper production and tropical wood export. Since 1990, the total area of forest in Indonesia has decreased by 23.2%.

In 2015 there were clear signs that President Joko Widodo (studied forestry scientist) is willing to hold those responsible for the illegal slash and burn to account. At the end of April 2016, he made it clear that he did not want to grant any new concessions for palm oil plantations. In September 2018 he imposed a decree according to which no further palm oil concessions may be granted for the next 3 years.

In Indonesian environmental policy, increasing attention is currently being paid to forest fire prevention, peat bog management and peat bog rehabilitation. Burning peat bogs are one of the most important reasons for Indonesia’s high CO2 emissions.

The Indonesian government has set ambitious climate targets. Emissions are to be reduced by 29% by 2030 – with appropriate international support even by 41%. The current government’s environmental policy focuses on land use, energy and waste.

Deforestation and slash and burn have already led to noticeable climate change in many regions of Indonesia. Despite numerous attempts to reduce emissions, such as the REDD program, hardly any noteworthy successes have been achieved in recent years.

The high rate of deforestation also regularly leads to landslides. Hundreds, usually even thousands, of deaths are mourned every year as a result of these landslides.

According to aristmarketing, Indonesia is still one of the countries with the highest biodiversity in the world. But this biodiversity is clearly at risk from deforestation and the illegal trade in wild animals.

The relentless handling of nature is also noticeable in the big cities. The Jakarta metropolitan area is hit by heavy and long-lasting floods every year. The floods are also getting worse due to the fact that the heavily built-up part of Jakarta continues to sink. North Jakarta is currently sinking 25 centimeters per year. Therefore, the new government under President Joko Widodo decided in August 2019 to move the capital to East Kalimantan. A completely new capital is to be built there.

Among other things, this is also related to the threatened supply of clean drinking water to the capital. Mismanagement, increasing populations and increasing amounts of waste have contributed to the current water problem in Jakarta. The Citarung River that flows through Jakarta is considered the dirtiest river in the world.

Attempts by the government to encourage more environmentally conscious behavior among consumers (e.g. by avoiding plastic bags) have so far been unsuccessful. In Bali, therefore, at least one ban on single-use plastic has been imposed. The garbage there is primarily generated by tourism.

In large cities like Jakarta, the increasing number of vehicles not only leads to increased air pollution, but also to increasingly worse traffic chaos. Previous attempts to regulate the traffic chaos were unsuccessful. Furthermore, a long-term strategy and a sustainable transport policy are missing here.

In the almost unanimous opinion of investigating geologists, a lack of safety precautions during drilling led to the eruption of a mud volcano near Surabaya in 2006. The mud volcano is still active today and in 2015 brought around 8,000 cubic meters of mud to the surface every day. There are still no signs of when the mud volcano will stop its activities. The victims have not yet been paid anywhere near sufficient compensation. Around 60,000 people have been relocated to date. The drilling company was owned by an influential minister at the time of the outbreak. Neither he nor his employees were held legally responsible.

In 2012, the parliament in Jakarta decided to re-authorize mining in primeval forest reserves in principle.

In Bali there was currently considerable resistance to the ecologically and socio-politically controversial land reclamation project Kala Benoa. This resistance led to the project’s approval being withdrawn in August 2018. The plans were finally stopped in 2019.

Since the reactor disaster in Fukushima, the Indonesian government has abandoned plans to build nuclear power plants. 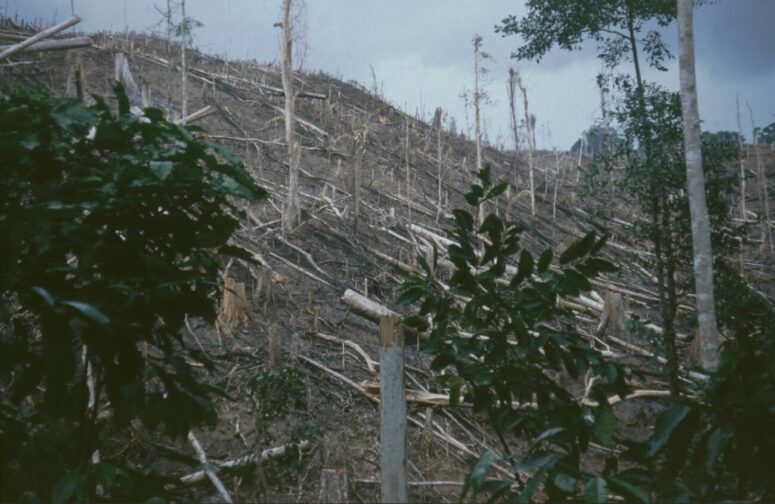