The equatorial island chain is with 1.9 million km² land area (world rank 15) the largest state in Southeast Asia and with approx. 266 million residents (2020) the fourth largest nation in the world. The population is currently growing by 0.86% per year, which corresponds to around 3.5 million people. The average age is 30.5 years.

The north-south extension of Indonesia is approx. 1,800 km, the west-east covers 5,100 km. Indonesia comprises around 17,500 islands, of which around 900 are permanently inhabited. The total length of the coast is approximately 54,000 kilometers.

The country overview map demonstrates the fragmentation of the Indonesian national territory caused by the island location, and clearly shows the ratio of land to water. The Indonesian term for “fatherland” or “home” (Tanah air) literally means “water country”.

The Internet offers a large number of other maps, some of which are very detailed, with which you can also zoom in on smaller places. Extensive collections from the University of Texas provide you with city maps and numerous thematic maps. Other private map collections also offer nautical charts, on which the most beautiful diving areas in Indonesia are listed! Also, Google Maps and Google Street View can give you a good insight into your target area.

Basic data on Indonesia is provided by the CIA Factbook, the Human Development Report and the Indonesian National Statistics Office, which also publishes a very detailed statistical yearbook on the Internet every year.

Other good data collections can be found on the websites of UNDP, the Federal Foreign Office and the Federal Ministry for Economic Cooperation (BMZ). For information on economic and development policy, the website of the World Bank and the Asian Development Bank is also recommended.

The Libary of Congress also provides a good summary of important data and basic information on Indonesia.

The a2zgov also offers extensive and detailed information on many topics relating to Indonesia on its German and English language pages.

The population distribution on the approximately 900 permanently settled islands varies greatly. The population density ranges from less than one resident / km² (in parts of Kalimantan and West Papua) to approx. 2000 residents / km² in the fertile rice-growing areas of Central Java. Urban centers (including Jakarta) achieve values of over 38,000 residents / km². 56.4% of Indonesians live in cities (2020).

There is a national disparity in the distribution of the population. Java, but also Madura, are very densely populated. Approx. 55% of Indonesians live there on less than 7% of the land area. Nationwide, the average population density is 151 people per square kilometer.

The fragmentation of the country and the great territorial expansion lead to an extremely heterogeneous ethnic and social composition of the Indonesian population. This heterogeneity is also reflected in around 700 regional languages and ‘Adat’ systems’ (= traditional value systems). In this context, the political rhetoric with its constant evocation of ‘national unity’ is to be understood, which in reality is still far from being lived.

A lack of infrastructure hinders economic development opportunities in Indonesia. Regions outside the major centers can often only be reached by time-consuming travel due to the underdeveloped transport sector. So far there are hardly any motorways.

The expansion of the infrastructure (especially the ports) is one of the central projects of the government of the incumbent President Joko Widodo.

The unity of the country is symbolically expressed in the national coat of arms. The heraldic bird (Garuda), which can be interpreted as the Indonesian state, holds a banner with the state motto ” Unity in Diversity ” (‘Bhinneka Tunggal Ika’) in its griffins. The 5-part shield symbolizes the five pillars of the Pancasila doctrine:

The feathers (17 wing feathers, 8 tail feathers, 45 neck feathers) symbolize the day on which independence was proclaimed (August 17, 1945) and thus the requirements of the ‘Sumpah Pemuda’ (see above) were fulfilled.

The text and music of the national anthem were first introduced in 1928 at a congress of nationalist youth. 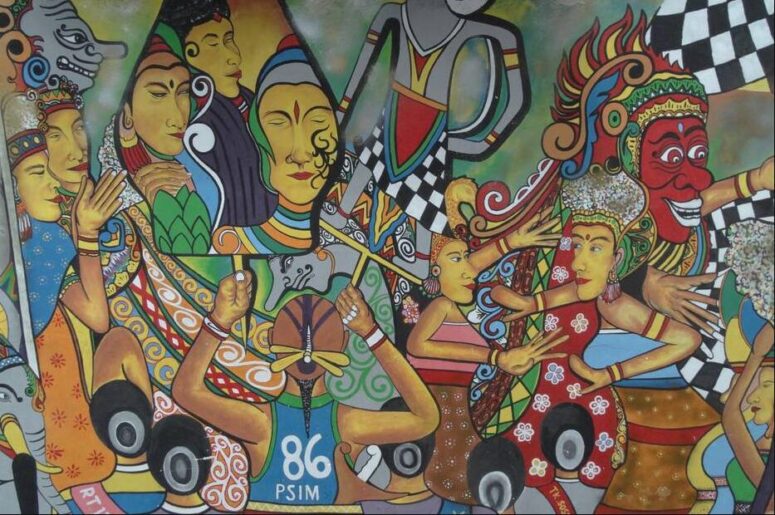