Iraq is a largely Arab state in the Near East. It borders Kuwait, Saudi Arabia, Jordan, Syria, Turkey, Iran and the Persian Gulf. Iraq also includes most of Mesopotamia, as well as parts of the neighboring desert and mountain regions. Iraq today emerged from the three Ottoman provinces of Baghdad, Mosul and Basra. The capital is Baghdad. The highest mountain is the Gundah Zhur at 3,607 meters. Iraq is crossed by the rivers Euphrates and Tigris.

One crisis after another has shaken the country in recent decades. The history of the former Caliphate is one of the most interesting in the world. Archaeological finds have confirmed that the roots of modern humanity lie in the two-stream country. Old cities such as the archaeological sites of Babylon, Kirkut or the capital Baghdad itself have historical cultural sites despite considerable war damage. But the Federal Foreign Office is currently warning of trips to the country that is in the middle of the civil war.

Iraq, which is largely rain-free, has a number of different vegetation zones. In some regions there is definitely more rain. There you will find a relatively diverse flora and fauna. In contrast, there are arid and arid regions in Iraq. Only a few plants or animals can be found in these places. The north of Iraq is mostly overgrown with shrubs and smaller trees. The Euphrates, which flows through this region with the Tigris River, enables the growth of date palms and reeds on the river banks.

In the south of Iraq there is drought. There was a government project to turn these desert areas into fertile soil. But in 1980 this ambitious plan was abandoned. The fauna in Iraq is typical of the Near East. In addition to vultures, buzzards and ravens, owls also live here. There are large fish stocks in the rivers Tigris and Euphrates as well as Shatt al-Arab. The lions and ostriches that had lived in Iraq until the 19th century have since disappeared.

Form of government: On October 15, 2005, the constitution was approved in a referendum. The last parliamentary elections were held on December 15, 2005.

Head of government: Prime Minister Nuri al-Maliki, since May 20, 2006

Language: about 80% Arabic and 15% Kurdish (official language in the Kurdish regions), Bedouin dialects are spoken in the southwestern part of the country, partly Turkish in the north, Azerbaijani and Aramaic in some regions. Foreign languages ​​such as English are rarely spoken.

Iraq shares borders (largely determined by the former colonial masters) with Iran, Kuwait, Saudi Arabia, Jordan, Syria and Turkey. There is a neutral zone between Saudi Arabia and Iraq, which was established in 1975-83 and is managed jointly. The only sea access is on the 58 km long coast to the Persian Gulf.

You can find an accurate topographic map of Iraq here.

The two-stream land between the rivers Euphrates and Tigris extends from the Syrian and Turkish border in the north to the Persian Gulf in the southern part of the country. Fertile plains stretch along the rivers.

The northeast of Iraq is characterized by foothills of the Taurus and Zagros that are up to 3,000 m high. This mountain range is still part of the Alpine system, which stretches from the Balkans to Turkey to northern Iraq, Iran and Afghanistan. The west of the country is covered by desert.

This map of the population distribution in Iraq was created by the Worldmapper team. Densely populated areas appear bloated, the area of ​​sparsely populated areas is reduced. The shape of the grid has been preserved; an underlying map with the original geographical extent helps interpret the map. The distorted map should help to present abstract statistical information clearly. 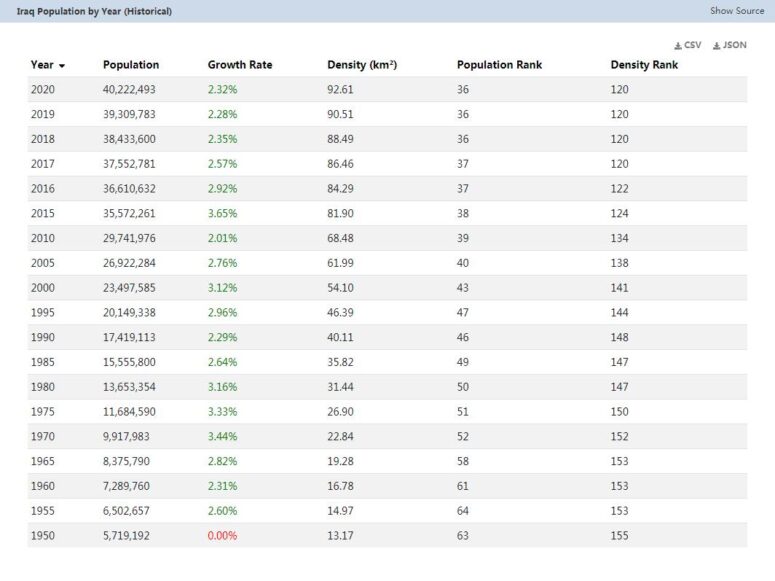 The climate in Iraq is characterized by long, hot and very dry summers and mild to cold winters. In July the average maximum temperature is 34 ° C, but can also reach up to 50 ° C. The Schemal, a hot northeast wind, often brings sandstorms in summer (in Baghdad on average 20 days, in Basra 15 days a year). In the mountainous north the climate is more temperate, the temperatures in January are around 10 ° C, but night frosts can also occur.

The wettest months are between November and March, the annual rainfall is between 100 and 180 mm, in the northern highlands, however, up to 1,200 mm can be reached. The regions bordering the Persian Gulf are a bit wetter, on the Schatt el-Arab it can get muggy.