Japan is an island nation in the Pacific off the coasts of Russia, North Korea, South Korea and China. The island chain Japan stretches along the east coast of Asia. The main islands are Hokkaido, Honshu, Shikoku and Kyushu, which are surrounded by around 6,000 other smaller islands.

The island nation is characterized by mountain forests that cover most of its land mass. The highest mountain in Japan is Mount Fuji. Only in the metropolitan areas are there built-up plains where the majority of the population lives. The rest consists of fascinating natural landscapes, where numerous national parks are located. Japan, the highly industrialized economic power, has at the same time preserved its unique traditions and centuries-old culture.

With imperial palaces, numerous temples, their garden art and hospitality, the land of the rising sun welcomes visitors from all over the world. Japan is considered one of the safest countries in the world. Even in the metropolis of Tokyo, you can stroll through the streets at night without worry.

Gentle sounds, the cherry blossoms and kimonos – holidaymakers like to connect this with Japan. But the culture of the Japanese is far more diverse than these three factors. Of course you can still find influences in modern Japanese culture that can be traced back to traditional culture. Although Japan is now one of the industrialized countries and one of the economically most important countries in the world, these traditions have been preserved and characterize the culture of Japan. This differs massively from other Asian cultures.
Some of the traditions in Japan date back to the country’s early history. Chinese influences were added in the 4th century. These include rice cultivation and bronzesmithing. From the 7th century, the written culture developed in Japan, which also has a Chinese origin.

Language: Japanese is the official language in the country. English is the first foreign language and business language.

Religion: 84% Shintoism and Buddhism (the majority of Japanese follow both religions). 16% other religions, including Christianity 0.7%.

Local time: CET + 8 h. There is no changeover between summer and winter time in Japan.
The time difference to Central Europe is +8 h in winter and +7 h in summer.

Japan is the world’s fourth largest island country (after Indonesia, Madagascar and Papua New Guinea ). The country is located in the Pacific Ocean off the coasts of Russia and Korea. Most of the island chain belongs to the country, which is about 160 km from the mainland of Asia and represents the northwestern part of the Pacific Belt of Fire.

The main islands are (from north to south) Hokkaido, the central and largest island Honshu, Shikoku and Kyushu. In addition, about 4,000 smaller islands (especially in the Seto Inland Sea and the Ryūkyū Islands) belong to the national territory of Japan.

The surface of Japan is mountainous, it is located on a mountain range that protrudes from the sea. In total there are more than 200 volcanoes in the country, 36 of them have erupted at least once in the past 100 years (including the Fuji). Around three quarters of the country are hilly or mountainous, which is inclined to such an extent that it is not suitable for agriculture or as a settlement area. The only usable areas are coastal strips, mountain valleys and some (mostly small) plains. in addition, terraced fields are widely used.

The lowlands are mostly near the coasts. The two largest of them are located in the regions of Kantō (Greater Tōkyō) and Kansai (Kyoto – Ōsaka – Kobe). Both levels are very densely populated, and several million cities have developed here. In relation to the country’s area, Japan has a relatively long and richly structured coastline. Bays with natural harbors are mainly located at the foothills of the mountain ranges.

The main islands of Honshu are the Japanese heartland and the largest island in the country. The capital city of Tokyo is also located on Honshu. With an area of ​​230,500 sq km (about 60% of the total area of ​​Japan), the north-south extension is about 1,300 km, the maximum west-east distance is between 50 and 240 km. The length of the coastline is 5,450 km. Japan’s tallest, Fuji, is located on Honshu. The river-rich Kanto plain in particular is very fertile. The climatic conditions are cool in the north and subtropical in the south.

Hokkaidō (in German for example: Northern Sea District) is the second largest island in Japan and with some smaller islands the northernmost prefecture in the country. At 2,291 m, the Asahi is the highest peak. In the south, Hokkaidō is separated from Honshu by Tsugaru Street. The largest city on the island is Sapporo.

Kyushu (in English: nine provinces) is the third largest island (35,640 sq km) and has the second highest population (13.44 million inhabitants). The name refers to the original administration (nine provinces). The very mountainous Kyushu is the southernmost of the four main Japanese islands. The most active Japanese volcano, the Aso, is the highest point on the island at 1,592 m. Other active volcanoes are the Sakurajima near Kagoshima and the Oz at Nagasaki. Fukuoka plays the central role in Kyushu with the port, industry and many administrations. The island’s climate is subtropical, mainly rice, tea, tobacco, potatoes and soy are grown, and silk is also produced.

Shikoku(in German: four countries) occupies the smallest area of ​​18,000 square kilometers of the four main islands. A total of around 4.5 million people live here. Shikoku is divided into four prefectures: Ehime, Kagawa, Kōchi and Tokushima. The name refers to Shikoku due to the original provinces: Awa, Sanuki, Iyo and Tosa, whose boundaries correspond to those of the current prefectures.

To the north-west of the main islands is the Japanese Sea (or East Sea), to the east is the Pacific Ocean. The Ryūkyū Islands form the border between the East China Sea in the west and the Philippine Sea in the east.

Directly off the eastern coast of Japan, the sea floor drops to the Japanese trench, where 10,554 m depth is reached in the Ramapo depth.

This map of the population distribution in Japan was created by the Worldmapper team. Densely populated areas appear bloated, the area of ​​sparsely populated areas is reduced. The shape of the grid has been preserved; an underlying map with the original geographical extent helps interpret the map. The distorted map should help to present abstract statistical information clearly. 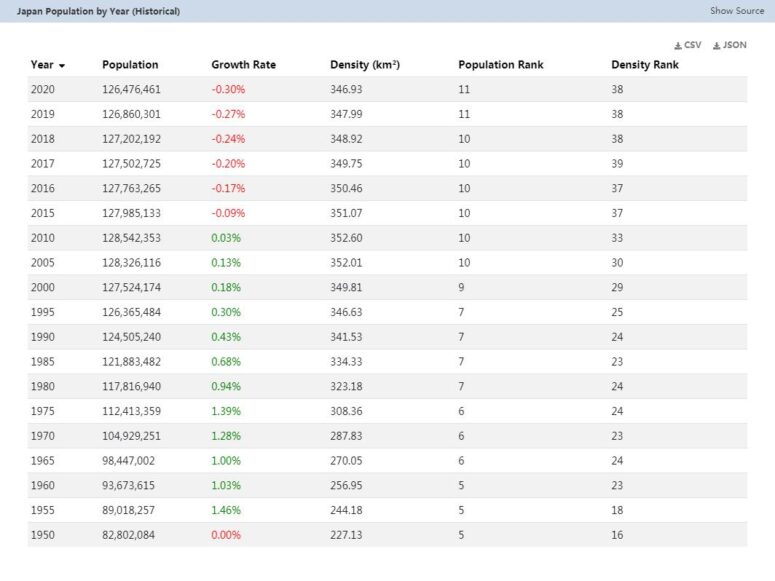 The Japanese island chain stretches from the 45th parallel in the north to the 20th parallel in the south.This large north-south extension means that the Japanese climate is very different regionally: in northern Hokkaido, there is a cold-temperate climate zone in snowy and cold winters southern Okinawa prefecture is dominated by subtropical climate. In addition, winter continental winds from Asia and summer sea winds modify the respective climate. Most precipitation falls in late June and early July, in southern regions as monsoon-like rain.

The typhoon season begins in early summer, especially the south and southwest of the country are affected by the Pacific cyclones. In the Pacific region, typhoons are most common in August, but most typhoons meet Japan in September.

The six main climate regions in Japan are:

Hokkaido: no particularly high rainfall. Long cold winters with drifts of snow in the
Japanese Sea: The wintry northwest wind in winter is responsible for heavy snowfall. In summer, the Japanese sea is cooler than the Pacific region, but there are often foehn winds.
Central highlands: Large temperature differences between winter and summer and between day and night throughout the year, the rainfall is only slight
Seto Inland Sea: The protective function of the mountainous regions of Chūgoku and Shikoku means that the climate is mild all year round.
Pacific region: the winters are cold when there is little snow, the summers are hot and dry
Nansei-shotō (Ryūkyū Islands): Subtropical climate with warm winters and hot summers. In the rainy season there is heavy rainfall, typhoons occur regularly.