Japan has been a leading economic power alongside the USA since World War II. By around 1970 it developed from an agricultural state to an industrial state. The country consists of a 2600 km long chain of islands off the Pacific coast of East Asia. The largest part is mountainous and only partially suitable for settlement. This is the reason for the formation of large agglomeration centers. The population density reaches peak values ​​in the numerous megacities.

The island nation of Japan consists of a 2600 km long chain of islands off the Pacific coast of East Asia. 3922 islands belong to this chain of islands. The four main islands are from north to south Hokkaido, Honshu, with the state capital Tokyo, Kyushu and Schikoku. The coastline of all islands is 30,000 km.

Nippon, as the Japanese call their country, means “land of the rising sun”. The old Japanese Empire has been a parliamentary monarchy since 1947. Kaiser AKIHITO has been the nominal head of state since 1989. Japan is very densely populated and is the eighth most populous country in the world.

Around 80% of the Japanese islands consist of high mountains, the chains of which run from northeast to southwest. The mountains of the country rise z. T. from over 12000 m depth from the sea floor. The highest mountain is the Fujijama volcano (3776 m) on the island of Honshu, about 100 km south of Tokyo. Over 500 peaks are higher than 2000 m. The landscape is characterized by the alternation of easily accessible lowlands, the coastal plains, and the difficult to develop mountains. Lowlands and basins are always separated by ridges. The canton level in which Tokyo is located is the largest level in Japan with an area of ​​14700 km². As part of the Earth’s weak zones surrounding the Pacific, the Japanese islands are subject to violent tectonic processes affected, which take place in the border area of ​​the Eurasian and Pacific plates.

Japan is one of the most earthquake-rich countries in the world. The most violent of the approximately 1500 stronger earthquakes per year often cause catastrophic damage. At the same time, volcanism occurs at the edges of the tectonic fracture zone. Of the more than 240 volcanoes in Japan, 36 are currently still active. In addition to earthquakes, volcanic eruptions pose a constant threat to the country.

Volcanic phenomena are also the country’s 12,000 or so hot springs, whose geothermal energy is used to supply heat and generate energy.

There are a large number of rivers and lakes in Japan due to the high rainfall climate. Due to the relief, the water-rich rivers are mostly short, but have a steep gradient and can therefore be used for generating electrical energy. The Shinano on Honshu is the longest river in Japan. It rises at an altitude of 2899 m and flows into the Sea of ​​Japan after 369 km. The largest lake in Japan with an area of ​​675 km², Lake Biwa, is also located on the largest island in the country. 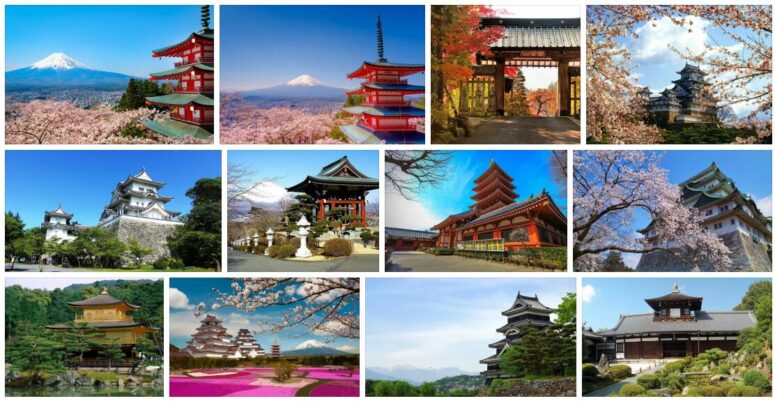 The climatic conditions in Japan are influenced on the one hand by the seasonal winds, the extra-tropical monsoons, and on the other hand by the latitude. In summer the winds blow mainly from the south and south-east, in winter from the north and north-west. There are essentially three different climatic zones on the Japanese islands:
Hokkaido has a cool, temperate climate, the three more southern main islands have a warm temperate climate and the Nansei Islands in the extreme south have a subtropical climate. The temperatures in the summer months are relatively high nationwide, including on the more northerly islands. In the winter months, however, there are greater differences. In Sapporo, Hokkaido, temperatures are below zero from December to March, while Okinawa, one of the southern islands, is relatively warm in January with an average of 16 °C. The total rainfall decreases from south to north.

In the subtropical areas in the south more than 2000 mm of precipitation falls annually, on Honshu about 1500 mm and in Sapporo only about 1100 mm.

Most of the precipitation falls in all parts of the country during the summer southeast monsoon brings humid air masses from the Pacific between May and October. Typhoons and heavy rain often occur in spring and late autumn. About 30 of these cyclones occur over the Pacific every year. The majority of them, however, pass Japan and rage over the ocean or just brush against the islands.

Japan’s vegetation is very species-rich. Around two thirds of the country, especially the mountainous areas, are covered by dense forests. The country’s climatic zones are also divided into three parts of the natural vegetation. Boreal coniferous forests
grow in northern Hokkaido . They merge to the south in mixed forests and deciduous deciduous forests. Further south, the proportion of laurel trees, oaks and camellias increases in these forests.

Latitude, climate and relief have a decisive influence on Japan’s agriculture. Only 14% of the country’s area can be used for agriculture. This is why Japan can not meet its food needs itself, despite intensive land use. Characteristic of Japanese agriculture is a strong fragmentation of the property with farm sizes averaging only 0.9 hectares. Favored by the climate, harvesting can be carried out twice a year from the middle of Honshu. Rice is grown on half of the usable area, especially in the vast plains of Honshus and in the south of Hokkaido. However, due to the changed eating habits of the Japanese, wheat and barley are also being grown more and more. Citrus fruits and tea flourish in the southern parts of the country, sugar cane on the Nansei Islands. Sericulture is of particular importance in Japan. Japan ranks fourth among the leading fishing nations, and fish farming is extremely important for the food supply of the Japanese.

After the Second World War, Japan rose to become the second largest economic power after the USA.

Today the country is one of the leading industrial countriesthe earth. 80% of the industry is concentrated in the Pacific industrial belt around the metropolitan areas of Tokyo, Osaka, Nagoya and Kobe. The branches of metal processing are dominant here, such as the electrotechnical and electronic industry with the construction of computers, industrial robots, electronic components and consumer electronics products. Machine tool, vehicle and shipbuilding are also highly developed. For example, Japan has been the world’s leading shipbuilding nation since 1956 and the leading automobile manufacturer since 1979. In addition to the metal processing industry, the chemical industry and the iron and steel industry are important in the country. The main driving force behind the economic boom was a strong export orientation in the industry. With an aggressive strategy and competitive products it was possible to conquer the world market in many areas.

For some years now, however, there have been increasing signs that the Japanese economic miracle has reached its limits. The so-called Asian crisis in the second half of the 1990’s was a particularly serious turning point. It brought Japan a high level of national debt, which continues to this day, and the collapse of over-indebted big banks and industrial groups.

up to the 6th century: Buddhism and Confucianism reach Japan via Korea, Buddhism becomes the state religion.

since 660: Japan becomes an empire, an emperor, the “Son of Heaven”, rules as the divinely legitimized head of state.

17th to 19th centuries: Japan closes itself off completely from the outside world.

1859: The major Japanese ports are opened to foreign trade for the first time.

from 1867: Emperor MEIJI ascends to the throne. The MEIJI period is the time of reforms and the further opening of the country to the west.

since 1912: Japan increasingly extends its political and economic sphere of influence to East and Southeast Asia.

1941: Japanese attack on Pearl Harbor, declaration of war on Japan by the USA

1945: Defeat of Japan in World War II. For the first time, American atomic bombs fall on the Japanese cities of Hiroshima and Nagasaki.