The Emirate of Kuwait is located in the Near East. It borders Iraq in the north and west, Saudi Arabia in the south and the Persian Gulf in the east. Kuwait has nine small islands. The landscape consists mainly of desert highlands and a flat, fertile coastal strip.

At the southern tip of the 40-kilometer-long Kuwait Bay, the capital city of Kuwait lies in its protected natural harbor. Skyscrapers, well-tended gardens and parks shape the image of the metropolis of the Kuwaiti Emirate. The three large, tapered round towers of the Kuwait Tower protrude from far away. But next to this modern building stands the oldest building in the city, the Seif Palace from 1896, in which the Emir and the Minister do their business. Failalka, Kuwait’s most beautiful island, is about 30 kilometers from the metropolis.

In addition to remarkable archaeological excavation sites, the large resort complex in the south of Kuwait offers beaches, swimming pools, leisure and sports facilities and restaurants at its finest.

Kuwait is a country that is very rich in mineral resources. Large deposits of petroleum can be found here. This oil and the sale of it is Kuwait’s main source of income and secures the country’s wealth. Oil has been mined here since 1946. Kuwait is also part of OPEC, the international organization for oil-exporting countries.
94 percent of the total revenue in the state budget comes from the sale of oil. Kuwait produces over 2.6 million barrels of crude oil a day. In 2006, further oil deposits and also natural gas sources were discovered.

Since Kuwait mainly lives on oil and soon also on natural gas, agriculture is relatively insignificant for the economy. Only one percent of people work in agriculture. Of course, the low proportion of agriculture has to do with the climate in Kuwait. Dry conditions prevail here. Artificial irrigation systems are trying to expand agriculture. However, the dates, melons and forage clover are only produced for the domestic market. In addition, sheep, goats and cattle are kept.

Form of government: Kuwait has been an emirate and hereditary monarchy since 1962. The constitution dates from the same year, the last constitutional change was made in 1997. The National Assembly consists of 50 elected members. In Kuwait, only men over the age of 21 whose fathers have been living in the country for at least 30 years are allowed to vote. Kuwait has been independent of Great Britain since June 19, 1961.

Language: The official language in the country is Arabic, English is widely spoken.

Religion: Islam is the state religion in Kuwait, 85% of the population are Muslims (including 70% Sunnis and 30% Shiites). Others, such as Christians, Hindus and Parses, make up 15%.

Local time: CET + 2 h
In Kuwait there is no change between summer and winter time.
The time difference to Central Europe is +2 h in winter and +1 h in summer.

Kuwait in the Near East is bordered by Iraq in the north and Saudi Arabia in the south. In the Persian Gulf east of the country (coastline: 499 km) there are nine smaller islands that belong to the national territory of Kuwait. The largest island, Bubiyan, was connected to the mainland by a 2,400 meter long bridge. Since the liberation from the Iraqi invasion in 1991, Bubiyan has been used as a military base. The remaining eight islands are: Failaka, Auha, Miskan, Kubbar, Umm al-Maradim, Qaruh, Warba and Umm an-Namil.

You can find an accurate topographic map of Kuwait here.

The surface of the country is largely dominated by the highlands of the ad-Dibdiba desert, and the Persian Gulf has a flat, fertile coastline.
The landscape of Kuwait is almost flat except for the high stripes of the Zaur Mountains on the Bay of Kuwait and individual hills. There are several oases in the interior.

Kuwait Bay is about 40 km long and divides the coast into north and south. In the north, up to the Shatt al-Arab, there is alluvial land. The Kuwaiti capital lies at the southern tip of the bay, in a protected, natural harbor.

In the south of Kuwait City, there are extensive oil fields associated with deposits in Saudi Arabia. The landscape rises gently in a southwesterly direction. At 306 m, the country’s highest peak is on a sandstone plateau in the west of the country. The Wadi al-Batin, a seasonally dry dry valley, forms the western border with Iraq.

This map of Kuwait population distribution was created by the Worldmapper team. Densely populated areas appear bloated, the area of ​​sparsely populated areas is reduced. The shape of the grid has been preserved; an underlying map with the original geographical extent helps interpret the map. The distorted map should help to present abstract statistical information clearly. 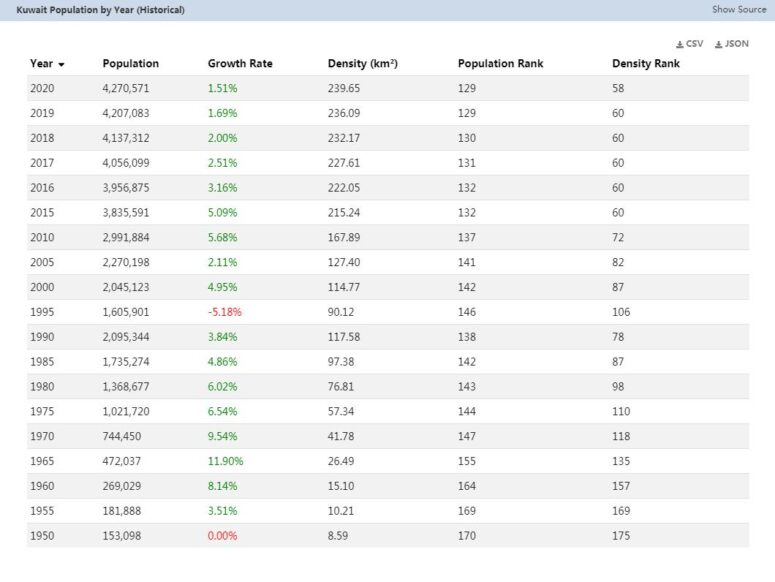