Laos is in Southeast Asia. It borders Vietnam in the east, China and Myanmar in the north, Thailand in the west and Cambodia in the south. The mountainous, densely forested Laos with the river plain on the Mekong is characterized by its green originality.

The capital Vientiane on the banks of the Mekong, impresses with its almost village character. Numerous buildings are still reminiscent of the former colonial rule of France, such as the old French colonial buildings and the Monument des Morts, which could suggest the Arc de Triomphe of Paris.

The landmark of Laos is the 16th-century That Luang, which represents the union of Buddhism and Laoism. The famous plain of the clay jugs can be found in the green north of the country. Hundreds of these huge stone jugs, the origin of which is still unknown, are spread over a large area.

Between Mekong and Khan is the old royal city of Luang Prabang, which is a UNESCO World Heritage Site.

Laos is a wonderful country that wants to be discovered. The different cultures make a trip through the country particularly interesting. The plains along the Mekong are the most populated region in Laos. The mountains, however, are almost not inhabited by people.

When the French colonial power came to Laos at the beginning of the 20th century, the population groups were divided according to external characteristics. The Lao, Khmu and the Thai distinguished. As the Lao Kingdom, the Thai and Lao later merged into one group. Scientists revised the classification at that time and developed a new scheme together with the state of Laos. After this there are now three main groups. The Lao Loun, the Lao Theung and the Lao Soung. They correspond to the traditional categories of colonial masters. This division lasted in Laos until 1975, when it was modified again by the Communists.

Form of government: Laos has been a People’s Republic since 1975. The constitution dates from 1991. The National Assembly consists of a chamber with 109 members, the legislative period is 5 years. Laos has been independent of France since July 19, 1949.

Local time: CET + 6 h. In Laos there is no change between summer and winter time.
The time difference to Central Europe is +6 h in winter and +5 h in summer.

Although relatively close to the Gulf of Tonkin, Laos is the only landlocked country in Southeast Asia. The northern neighbor is China (Yunnan province), Vietnam is in the east, Laos borders with Cambodia in the south and Myanmar and Thailand in the west. The southern part of Laos is on the Indochinese Peninsula, the northern part on the Southeast Asian mainland.

Here you can find an accurate topographic map of Laos.

Up to the river level of the Mekong in the border region to Thailand, Laos (especially the northern part of the country) is characterized by mountains and mountains. The landscape is partly made up of thick forests. The topography of Laos can be divided into two regions:

The area dominated by mountains extends north-south through almost the entire country and takes up almost 90% of the country’s area. Here heights of more than 2000 m are reached, the highest peak is 2.819 m high Phu Bia. The rest of the area is a lowland on the Thai border. Here is the Laotian capital Vientiane.

The country’s most important river is the Mekong, which originates in Tibet and flows as far as Vietnam. Its delta near Ho Chi Minh City (Vietnam) drains into the South China Sea. The Mekong River is the border to Thailand and Myanmar for approx. 1,000 km. A total of 1,898 km of the course of the river are located on Laotian territory. The water in most of the country therefore flows into the South China Sea. Only 12% of the country’s surface (in the northeast) is drained into the Gulf of Tonkin. The population density is highest on the Mekong plains, including the capital Vientiane and Luang Prabang. Other important rivers for the country include Nam Ngum, Nam Ou and Nam Xebanghieng.

The population is very unevenly distributed in the country, especially the eastern, mountainous regions are only sparsely populated. The population is not very urban, not even a third live in cities.

This map of Laos population distribution was created by the Worldmapper team. Densely populated areas appear bloated, the area of ​​sparsely populated areas is reduced. The shape of the grid has been preserved; an underlying map with the original geographical extent helps interpret the map. The distorted map should help to present abstract statistical information clearly. 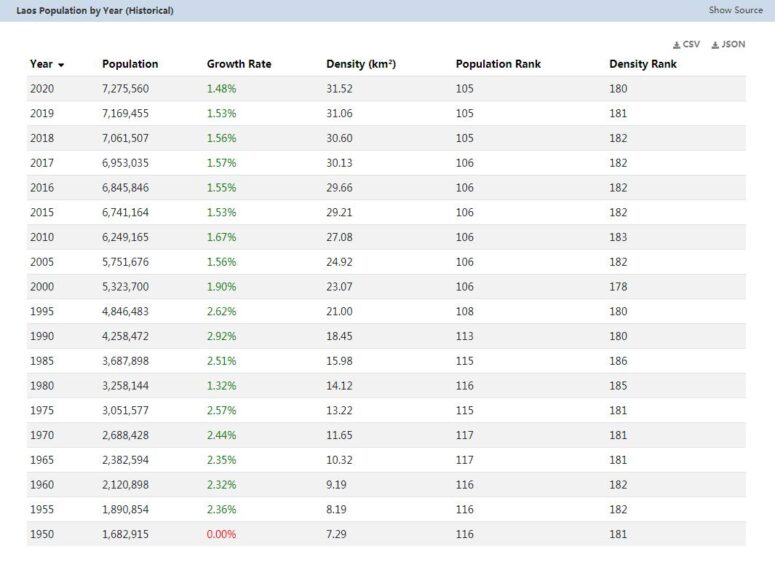