In this context, Indian literature stands for all literary traditions of the Indian subcontinent. If you ignore the inscriptions of Indus culture that are not interpreted, Indian literature begins in the 9th century BCE. . For several hundred years the surrender was verbal. Later, they also received a written handover. Its history extends right up to the present day literature in India, Bangladesh, Pakistan, Nepal and Sri Lanka. Both religious and secular traditions are spread across the Indian continent. Many languages ​​and dialects have worked and still function as literary languages. However, the literary landscape of India is dominated by three major literary languages, Sanskrit, Persian and English, and almost all Indian literature builds on the literary traditions of these three languages. One important exception is the original and independent Old Tamil literature.

It is natural to divide the literary traditions into the following main groups (literary languages ​​in parentheses): 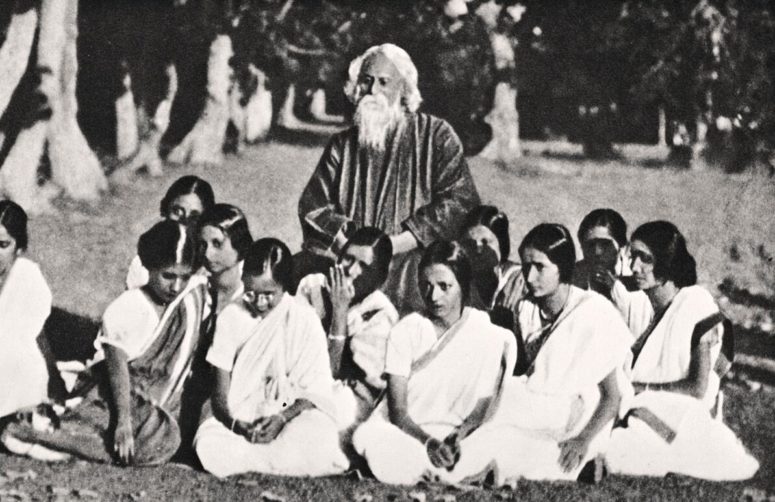 One of India’s foremost cultural personalities, the philosopher and poet Rabindranath Tagore, surrounded by a group of students in the park at Visva-Bharati University, Shantiniketan (Port of Peace), West Bengal. The university was founded by him in 1921 as an international center for the study of Eastern and Western cultures. Emphasis was placed on research and studies in philosophy, art, music, dance, Asian languages ​​and technology.

For the sake of completeness, it should be added that in the Tibetan-Burmese language Newari in Nepal, there is quite an extensive literature that is completely dominated by its Indian role models. It should also be mentioned that the rich folk literature in the oral language santali is written down and printed especially thanks to the efforts of the Norwegian Paul Olaf Bodding.

The literature is discussed further under the individual languages.