Malaysia is located in Southeast Asia. The country is divided into two parts in western Malaysia between Thailand and Singapore and eastern Malaysia on the island of Borneo. Malaysia shares its borders with Thailand, Singapore, Indonesia and Brunei.

Kuala Lumpur, the capital of the multicultural nation Malaysia, owns one of the tallest buildings in the world, the Petrona Tower, and presents itself in contrasts. In addition to the other ultra-modern skyscrapers, such as the KL Tower and the shopping centers, the metropolis on Merdeka Square is worth seeing, the Sultan Abdul Samad building, as well as the colonial train station and the Jamek mosque in the heart of the city. The large Lake Gardens with hundreds of species of orchids form the ideal contrast.

The royal city of Kuala Kangsar in the middle northwest of Malaysia is also worth seeing in Malaysia. Here is the Royal Museum and the Ubadiah Mosque, a work of art made up of onion domes, gold and Italian tiles.

The mountain landscape of the Cameron Highlands is an ideal destination for nature lovers in Malaysia. The famous Malaysian tea plantations can also be found here. Malaysia is also the destination of numerous cruises. Kuala Lumpur and the island of Borneo are the main destinations on these cruises.

Malaysia has a diverse population and consists of different groups with different cultural backgrounds. Today, 50.4 percent of Malays live in Malaysia. This is the main population group. The Chinese followed with a 23.7 percent share of the total population. The indigenous peoples such as the Orange Asli and Dayak together make up 11 percent. 7.1 percent of the people living here are of Indian descent, 7.8 percent come from all other parts of the world.

Capital: Kuala Lumpur (1.48 million inhabitants, 2006). Putrajaya is the administrative center in the country, but the parliament meets in Kuala Lumpur.

Form of government: Malaysia has been an electoral monarchy in the Commonwealth since 1963. The constitution dates from 1957, the last constitutional change was made in 1994 (restriction of the sultan’s family privileges). The bicameral parliament is composed of the People’s Assembly ( Dewan Rakyat ) with 219 members and the Senate ( Dewan Negara ) with 69 members. Malysia has been independent of Great Britain since August 31, 1957.

Language: The official language in Malaysia is Malay (Bahasa Melayu). English is used in large parts of the population as a language of communication and education. Chinese dialects (Cantonese, Mandarin, Hokkien, Hakka, Hainan, Foochow), Tamil, Telugu, Malayalam, Panjabi and Thai are also spoken. There were several indigenous languages ​​in eastern Malaysia, the most widespread being Iban and Kadazan

Local time: CET + 7 h.
In Malaysia there is no changeover between summer and winter time.
The time difference to Central Europe is +7 h in winter and +6 h in summer.

The Southeast Asian state of Malaysia is located on the Malay Peninsula in the south of Thailand. The island state of Singapore lies off the southern coast.

East Malaysia with the parts of Sarawak and Sabah is located on the island of Borneo in the north of Kalimantan ( Indonesia ). The Sultanate of Brunei is enclosed in the north by East Malaysia. Apart from the island of Singapore (which is connected to Malaysia by a bridge), Tanjung Piai in the Malaysian state of Johor is the southernmost point on the Asian mainland. The major shipping route Strait of Malacca runs between the Malay Peninsula and Sumatra Island (Indonesia).

West and East Malaysia are about 650 km apart, the two parts of the country are separated by the South China Sea.

The landscapes in the western and eastern parts of the country are similar: plains run along the coasts, while densely forested mountain ranges rise inland. The highest elevation in Malaysia is the 4,100 m high Gunung Kinabalu in the north of the island of Borneo. The largest island in Malaysia is Banggi, also in northern Borneo.

On the west coast of West Malaysia there are marshes and mud banks, the eastern, unprotected coast is characterized by white beaches and dense rainforest. The western coastal plains are used by agriculture, the forest population has declined sharply here.

Off the west coast are the islands of Pangkor, Penang and the Lankawi archipelago, which consists of 99 smaller islands; near the east coast, Tioman, Redang, Perhentian and Rawa rise from the sea.

The largest and most important city in Malaysia is the financial center and capital Kuala Lumpur, where the parliament also meets. However, the new administrative center is being built in Putrajaya, and numerous government institutions have already moved there.

This map of the population distribution in Malaysia was created by the Worldmapper team. Densely populated areas appear bloated, the area of ​​sparsely populated areas is reduced. The shape of the grid has been preserved; an underlying map with the original geographical extent helps interpret the map. The distorted map should help to present abstract statistical information clearly. 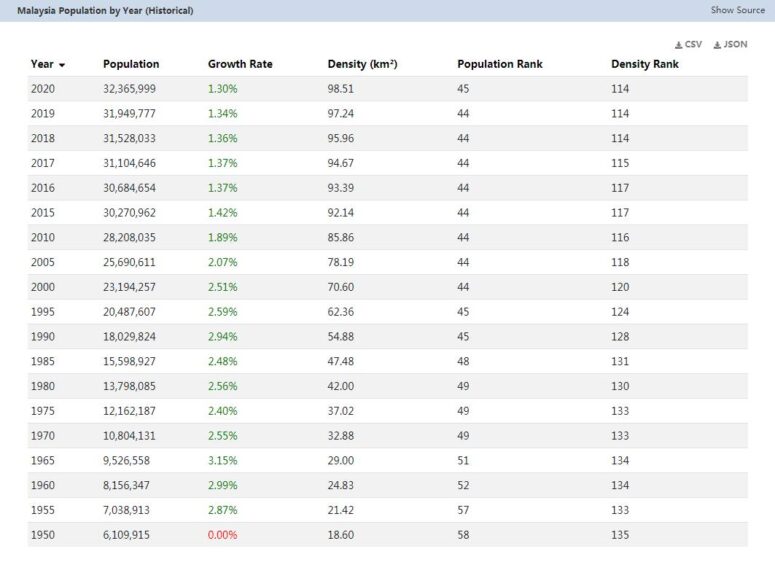