India is the world’s largest film nation. Up to 15 million cinema tickets are sold every day to the country’s 20,000 cinemas. Production is also high, with up to 1000 films a year.

Already in 1896, the Lumière brothers’ assistant Maurice Sestier held the first feature film at the Hotel Watson in Mumbai (Bombay). It was an instant success. India’s first topical film was produced in 1899, while the first feature films, Raja Harishcandra and Bhasmasur Mohini , were made in 1913 by pioneer DG Phalke. Of the nearly 1300 films produced before the sound film made its appearance, The Light of Asia (1925), a depiction of Buddha’s life under the direction of Himansu Ray and the German Franz Osten.

The first Indian sound film, Alam Ara (1931), ushered in a new and even wider success for Indian films. The film industry grew rapidly and was split up into different language areas. Hindi film (also known as All-India)movie) was established as the largest segment, with a large number of producers in India’s three film capitals Mumbai, Chennai (Madras) and Bangalore. In the south, films are made in the languages ​​Telugu, Tamil, Kannada and Malayalam, and the Bengali film is headquartered in Kolkata (Calcutta). Many Indian films are made in 3-4 languages ​​at the same time and dubbed into many more. Indian film has evolved into a popular and stylized art form with song, dance and choreographed fights, which constantly borrows its narratives and conflicts from traditional culture. Some stories have been filmed many times, e.g. the novel Devdas(1912) by Saratchandra Chatterjee, of which Bimal Roy’s 1955 version stands out among some twenty versions. The traditional elements can be mixed with modern issues and Western themes, but the problems of Indian society with poverty and inequality are only included as factors in the melodramatic intrigue. It has been said that the Indians do not go to the cinema to understand a changing reality, but as pilgrims to experience the world order one believes in manifesting in vivid images.

In the 1950s also came a breakthrough for a lyrical realism in the form of Satyajit Ray’s trilogy about the young boy Apu: Pather Panchali (1955), Aparajito (1956) and Apu’s world (1959). Until his death, Ray was the internationally renowned Indian film director. A critical relationship with society and history also characterizes Mrinal Sen with films such as Bhuvan Shome (1969) and Ruins (1984). Mira Nair made an international break with the gripping Salaam, Bombay! (1988), her debut film. 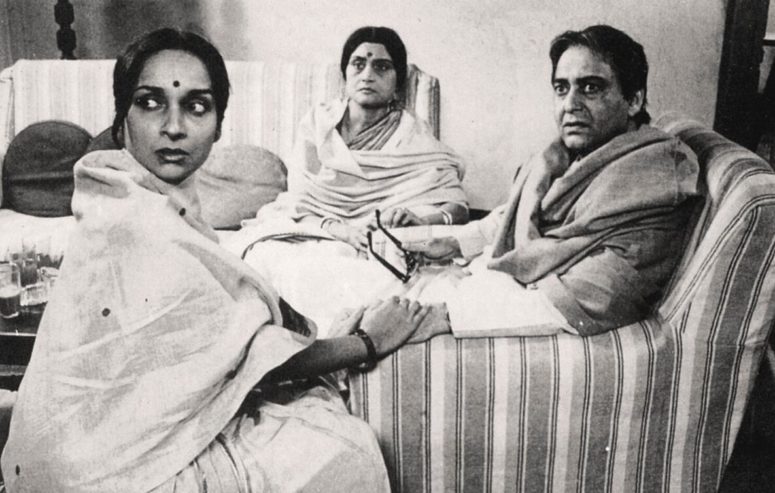 A scene from Ganashatru (1988) directed by Satyajit Ray, a filmization of Ibsen’s An Enemy of the People. The Dr. Stockmann character was played by Soumitra Chatterjee (right).

The popular film tradition is possibly changing. The censorship has been somewhat liberalized in recent years, and the influence of Hollywood is noticeable, both in terms of romance and action. Production is slowly declining as the younger audience becomes more aware of American film. In 2003, 877 feature films were produced in India, of which 246 were from the leading language circle Hindi. At the same time, the Indian film has seriously entered the world market under the nickname “Bollywood” (by the place names Bombay and Hollywood), and many producers have large revenues from the Indian and Pakistani diaspora in Europe and the United States.