India has 22 nuclear reactors in operation at eight nuclear power plants, with a total capacity of 6.2 GW e. Nuclear power covers about three percent of the country’s consumption of electrical energy. The country is in a period of strong growth in electricity consumption, and plans have been made to meet a significant part of the new demand with nuclear power.

Primary energy consumption has risen steadily in recent years and in 2017 had reached 37 EJ. India is thus the world’s third largest consumer of energy after China and the United States. This presents India with major challenges as around 30 per cent of energy consumption is based on imports. Annual growth over the past ten years has been 3.5 per cent. 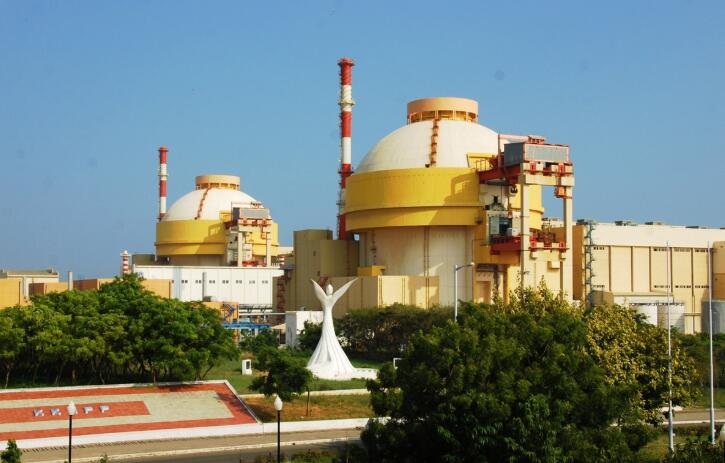 Most of the power generation today comes from fossil fuels, mainly coal, which accounts for over 75 per cent of power production. Coal reserves are limited and in 2013 the country had to import 159 million tonnes of coal. Hydropower and other renewable energy are also important sources of power generation.

Production of nuclear power was 44 TWh in 2016, equivalent to 3 percent of the country’s electricity production. The country has 22 reactors in operation with a total output of around 6 GW.

Nuclear power use in India is characterized by the country’s failure to comply with the Non-Proliferation Agreement and the country has thus been excluded from international trade in nuclear technology. The development of nuclear power is therefore largely carried out without the assistance of other countries. This isolation may explain that the country has faced several technical difficulties that may have contributed to the reactors, up to the mid-1990s, having some of the world’s lowest capacity factors. This has now improved significantly.

India currently has seven reactors under development. These will increase capacity by around 5,000 MW. The further program is ambitious and largely based on domestic resources. 22 reactors are planned with a total capacity of 21,300 MW. The goal is for nuclear power to account for 25 percent of electricity production by 2050.

Exclusion from international trade and demands for a high degree of self-sufficiency have made it necessary for the country to build up its own independent nuclear fuel cycle. This includes the extraction of uranium, the production of nuclear fuel and heavy water, the construction of reactors, the reprocessing of spent fuel and the final treatment of radioactive waste.

India has small deposits of uranium but possesses the world’s largest reserves of thorium (see separate article on thorium resources). This relationship, combined with the requirement for a high degree of self-sufficiency, led the country to choose a long-term program to establish a thorium-based nuclear fuel cycle. The program involves extensive work on developing new technology and new reactor types. The easing of the trade restrictions implemented in 2009 (see further discussion in the article on NSG) has not changed this objective and the country is still set to develop this technology. One step in this work is the construction of a prototype for a rapid propagation reactor at Madraswhich will start in 2020. Much development work remains and it is expected that the program will require an additional 15-20 years before thorium will be used as nuclear fuel to any greater extent.