Pakistan is located in South Asia. It borders Iran, Afghanistan, China and India. In the south, Pakistan shares the coast of the Arabian Sea, a by-sea of ​​the Indian Ocean. In the extreme north of Pakistan, the three highest mountain ranges on earth meet with the Hindu Kush, the Karakoram and the Himalayas and shield the country from Central Asia.

The capital of Pakistan is Islamabad. The former capital Karachi is the largest city in Pakistan, which is located near the Indus estuary on the Arabian Sea. The modern industrial city offers some interesting sights such as the fishing port and Quaiz-e-Azam’s Mazar, the mausoleum of the founder of Pakistan.

Nature lovers can explore different parts of Pakistan on horseback or on a camel. Lake Haleji near Sind offers numerous water sports. Cultural and historical highlights can be found in Lahore, an old city with impressive buildings, such as the Badshni Mosque, the Shalimar Gardens and the National Museum of Archeology.

In the 3rd millennium BC, the era of Indus culture began in the area of ​​today’s Pakistan. It quickly developed into a real high culture with cities. The imposing grounds, which can be viewed as ruins today, were a feature of this heyday of the region.

The archaeological finds uncovered during excavations in Pakistan are significant. For example, the remains of the cities of Mohenjo-Daro, Haroppa and Kot Diji were found. At that time, these cities already had a road network and a sewage system. At the time, there was also an option for irrigation and drainage. Although these finds are so amazing, they also clearly show one thing. The upper class did not live in today’s Pakistan. Because large social facilities or temples are missing. It can therefore be assumed that a middle-class middle-class life was taking place here.

Form of government: Pakistan has been an Islamic Republic since 1973, the constitution dates from the same year. In 1999, after a military coup, the constitution was overridden, but has been gradually reintroduced since 2002. The bicameral parliament consists of a national assembly (lower house) with 342 members and a senate (upper house) with 100 members. Pakistan has been independent of Great Britain since August 14, 1947. Since Bangladesh declared independence in 1971, the area of ​​Pakistan has gone back to what was formerly West Pakistan.

Language: The official language Urdu is spoken by approximately 8% of the population. The other official language is English, which is particularly common in the Pakistani elite and in administration. Pundschabi (48%), Sindhi (12%), Siraiki (10%), Pashtu (8%), Baluchi (3%), Hindko (2%), Brahui (1%) are the most common.

Religion: 97% Muslim (including 70% Sunnis and 20% Shiites), minorities like Christians and Hindus 3%

Local time: CET + 4 h.
There is no changeover between summer and winter time in Pakistan.
The time difference to Central Europe is +4 h in winter and +3 h in summer.

Pakistan is bordered by Iran to the west, Afghanistan to the north and India to the east. The region of Jammu and Kashmir, which is controversial with India, borders on Afghanistan, China and India.
The north-south extension of Pakistan is approximately 1,500 km. In the south there is a 1,046 km long coast to the Arabian Sea.

In northern Pakistan, three of the highest mountains in the world rise: Hindu Kush, Karakoram and Himalayas. this wall separates the country from Central Asia.

The Hindu Kush has a rugged and mountainous relief. It runs from the border with Afghanistan in the west to the Indus in the east. The greatest height is reached in the Tirich Mir, which is almost 7,700 m high. North of the Indus, the K2 rises to 8,611 m in the glaciated Karkorum. It is the highest peak in Pakistan and the second highest in the world.

A small part of the Himalayas is in the south of the Indus upper reaches. Pakaistan controls an area where five of the 14 eight-thousanders are located, the highest being Nanga Parbat (8,125 m).

More than a third of the country’s area is covered by the Indus plain. After leaving the northern high mountains and flowing south, the Indus crosses the Potwar plateau between Peshawar and Faisalabad. In the south of the Panjnad estuary, the meandering Indus flows through an extensive embankment level in southern Punjab and in the Sindh region before it forms an approximately 8,000 sq km delta to the Arabian Sea.

In the eastern part of the country, in the south of the Punjab, the Thar desert forms the border of the Indus plain. In the far south-east, the Rann salt marshes extend from Kachchh to Pakistani territory.

This map of population distribution in Pakistan was created by the Worldmapper team. Densely populated areas appear bloated, the area of ​​sparsely populated areas is reduced. The shape of the grid has been preserved; an underlying map with the original geographical extent helps interpret the map. The distorted map should help to present abstract statistical information. 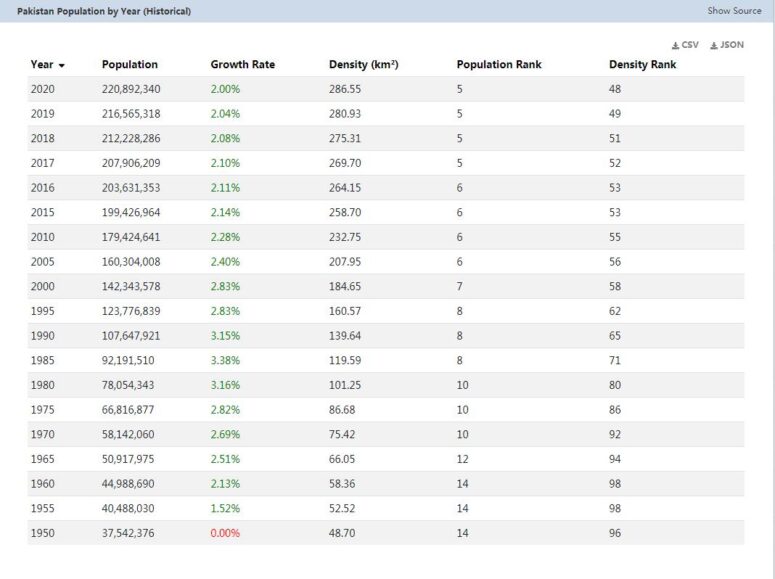 Pakistan is largely determined by the arid subtropical continental climate, but there are considerable regional differences.

In the middle of the year it is usually hot in Pakistan, some places can get quite cold from December to February. On the coast it is pleasantly warm between November and February with daytime temperatures between 25 and 29 ° C, the nights are cool and there is little rain. Pakistan’s southern inland is one of the hottest regions in the world, with average temperatures of 40 °C often reached between April and September. The northern regions are also very hot in the middle of the year, but pleasant between May and September, and it can be cool between December and February.

The rainfall distribution is also uneven, with precipitation decreasing in a north-south direction. The foothills of the Himalayas in the far north of the Punjab are subject to heavy rainfall, reaching about 1,000 mm annually. In Lahore, on the other hand, fall about 500 mm, in southern Punjab and Sindh not even 200 mm. The precipitation falls only in the period of the southwest monsoon from July to August.

Baluchistan is also characterized by extreme drought, in the western highlands less than 100 mm a year are reached. In winter there can be frost at night, in January the average temperature is only around 10 ° C, whereas in summer the temperatures are almost as high as in the Indus plain. It is a bit cooler in the higher regions, the outskirts between Baluchistan and the Indus also receive a little more precipitation annually with 200 – 300 mm. Most of the low rainfall in Baluchistan falls in winter, while the summer monsoon brings little to East Baluchistan and no rain to western Baluchistan.

The climate in the high valleys of northern Pakistan is very different from other regions. In part, the temperatures in winter do not rise above 0 °C even during the day. Summers are warm, and annual precipitation in the Himalayas sometimes reaches 1,500 mm. The precipitation decreases here to the north and west.