The Philippines are located in the western Pacific Ocean and belong to Southeast Asia. The South China Sea separates the archipelago from Vietnam in the west, the Celebes Sea from Indonesia in the south. The Philippines consist of more than 7,000 islands.

The island state is known for beautiful beaches and turquoise blue water and is considered a diving paradise. The capital, Manila, is located on the island of Luzon, the largest island in the Philippines. Intramuros, an old Spanish fortress district built in the 16th century, is the old core of Manila. South of Manila, Mount Eel rises in a large lake. It is one of the twelve volcanoes still active in the Philippines. The second largest island on the archipelago is Mindanao, it is also the southernmost and particularly interesting in terms of landscape. Here is also the city of Davao, which offers the most beautiful souvenirs from the Islamic areas of the island. The island has numerous beaches.

Form of government: The Philippines has been a presidential republic since 1987, the constitution dates from the same year. The bicameral parliament consists of a house of representatives with 212 members and a senate with 24 members. The Philippines had been independent of the United States since July 4, 1946 (until June 12, 1898 the country was a colony of Spain).

Head of state and head of government: President Benigno Aquino III., Since June 30, 2010

Language: The official language of the Philippines is Filipino (which is rooted in the Tagalog). English is also the official language and is spoken in large sections of the population. There are eight major native dialects: Tagalog, Ilocano, Cebuano, Hiligaynon or Ilonggo, Waray, Bicol, Pampango and Pangasinan

Local time: CET + 7 h.
There is no changeover between summer and winter time in the Philippines.
The time difference to Central Europe is +7 h in winter and +6 h in summer.

The Philippines are the peaks the peaks of submarine mountain ranges that have formed between the Eurasian and Philippine continental plates. The islands are part of the Pacific Ring of Fire, earthquakes often occur, and volcanic eruptions are also typical. There are approximately 20 active volcanoes in the country, the Pinatubo and the Mayon on Luzon are particularly active.

Each of the Filipino Islands has mountain ranges that are difficult to access and often chain together in a garland shape. At 2,954 m, Mount Apo on Mindanao is the highest peak in the country.

The 1,000 – 2,400 m high mountains mostly consist of tertiary rocks, more rarely those of the Middle Ages. There are some elongated lowlands between the mountain ranges. The largest plains are the central level of Manila, the broad valley of the Cagayan River also on Luzon and the plain of Cotabato on Minanao.

Many of the smaller islands are coral banks.

The Philippine Trench, which is up to 10,540 m deep, stretches to the east of the Philippines. Tsunami tidal waves are possible due to seaquakes. 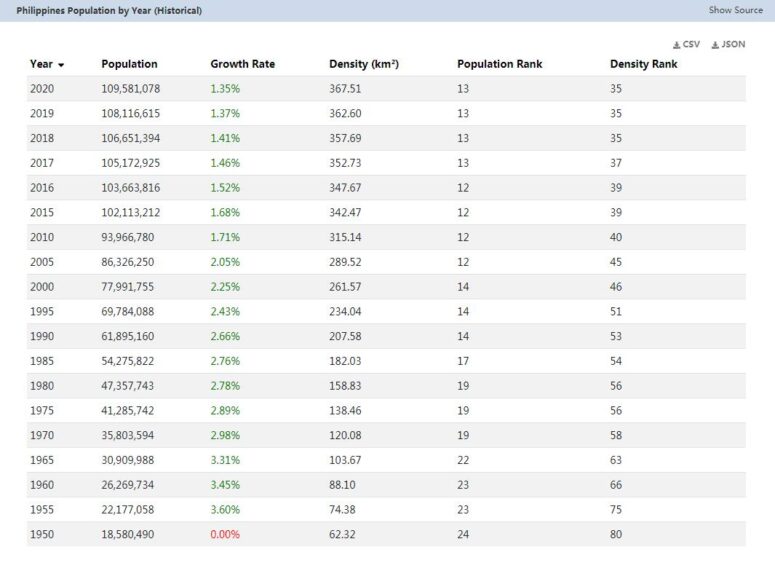 Because of the high temperatures all year round and sufficient rainfall, the vegetation is lush and evergreen. Almost all islands are covered by species-rich tropical rainforest up to 400 m high. Where there are dry months there is deciduous, bamboo-rich monsoon forest, especially on volcanic soils. Fog or evergreen oak forest grows above 400 m. The jungle is often damaged by slash-and-burn. Excessive use of soil and wood have partially transformed it into a grass savannah and on rainy slopes into vegetation-free rock. The tidal coasts are lined with mangrove thickets.

The wildlife is primarily characterized by insects and birds. There are also numerous poisonous snake species that are also widespread in the sea. The only predator in the Philippines is the crocodile.

This map of the population distribution in the Philippines was created by the Worldmapper team. Densely populated areas appear bloated, the area of ​​sparsely populated areas is reduced. The shape of the grid has been preserved; an underlying map with the original geographical extent helps interpret the map. The distorted map should help to present abstract statistical information clearly.

The climate in the Philippines is tropical and therefore hot and humid all year round. The climatic conditions are largely shaped by the proximity to the sea. No place in the Philippines is more than 200 km from a coast. Due to the location in the tropics and the moderate influence of the neighboring seas, there are hardly any seasonal temperature fluctuations; in most places, the average highs and lows are between around 31 °C and 24 ° C, and temperatures rarely drop below 20 °C at night.

The weather patterns on the entire archipelago are quite complex, but roughly a dry season (November / December to May) and a rainy season with the southwest monsoon (May / June to November) can be distinguished.

On average, between 2,000 and 3,000 mm of precipitation falls annually on the Philippine Islands, with the exception of around 1,500 mm in southwestern Mindanao and the Visayas Islands. Due to the fact that most of the mountains lie in a north-south direction, the western side of the archipelago receives considerably less precipitation than the eastern side.

The humidity in the Philippines is high all year round.

The typhoon season is between August and October, with several tropical storms crossing the Philippines each year. The north and the middle of the Philippines are particularly affected, but Mindenao in the south is hardly affected.