Qatar is located in the northeast of the Arabian Peninsula and is the most oil-rich country in the Persian Gulf between Bahrain and the United Arab Emirates. The state territory includes some islands. While the northwest is hilly, the rest of the country is made up of sand, dunes and salt flats. There are 700 mosques in the capital, Doha, of which the Great Mosque with several domes and the Abu Bakir al Siddiq Mosque are particularly noteworthy.

However, most of Qatar’s historic sites can be found in the north. This is how the Qalit Marir fortress stands in Zubara. The village of Umm Salal Mohammed with the ruins of a fort from the 19th century is also worth seeing.

Palm-fringed beaches can be found on the west coast. For water sports enthusiasts, especially divers, the endless sand dunes and beaches in southern Qatar are a Mecca where you can dive in the land of pearls.

Several spectacular construction projects are currently underway in the Emirate of Qatar, for example a 400-hectare artificial island called “Pearl”.

Qatar is a sometimes very contradictory country. On the one hand you want to become a competitive tourist country, but on the other hand Qatar is caught in traditional regulations. This is also related to the belief of the people of Qatar. Most of Qatar’s residents are devout believers in Orthodox Sunni-Wahhabi Islam. But if you travel the country, you will always notice that you want to be very liberal here.

Every TV viewer knows the Arabic news channel al-Jazira or has at least seen reports in the European media mentioning this station. The TV station is based in Qatar. International guests and interested residents can read the English newspapers The Peninsula, the Gulf-times and the Khaleej Times, which comes from Dubai. In Qatar, a change in the media is beginning to take place, because while previously hardly any critical issues were addressed, socially critical articles are now also being printed. Often the subject of this article is the situation of non-Qatari workers who have to work in significantly worse conditions than workers from Qatar.

Form of government: Qatar has been an emirate with an absolute monarchy since 1971. The new constitution dates from 2003. The Consultative Assembly consists of 35 appointed members, political parties are not allowed. Qatar has been independent of Great Britain since September 1, 1971.

Language: The official language in Qatar is Arabic. English is spoken in large parts of the population.

Local time: CET + 2 h.
There is no changeover between summer and winter time in Qatar.
The time difference to Central Europe is +2 h in winter and +1 h in summer.

Qatar is located in the Persian Gulf on a narrow, oval peninsula in the northeast of the Arabian Peninsula between the United Arab Emirates and Bahrain. In the south, Saudi Arabia borders Qatar. The maximum north-south extent is about 180 km, the west-east distance reaches up to 80 km. Some smaller islands also belong to the national territory.

Here you can find an accurate topographic map of Qatar.

Qatar is separated from the Arabian Peninsula by desert areas and salt marshes. The salt pans (Sabkhas) at sea level refer to the time when Qatar was still on an island. With a slight increase in the country between Arabia and the island at that time, a swampy connection was formed.

Further north there are slightly undulating hills that characterize the whole of Qatar. The highest point at 103 m, the Dschabal Duchan, is in the southern part of the country. To the east, the terrain slopes gently to the sea.

The surface of Qatar is determined by rubble and gravel deserts. Sand dunes have only formed in the outer southeast. On the coast you will find several wide bays, which are located in front of coral reefs, especially on the eastern coast.

The groundwater is relatively salty in Qatar, so the drinking water must be obtained in seawater desalination plants.

The Chaur Udaid sea lagoon is located in the south-eastern part of the country.

This map of population distribution in Qatar, Bahrain and Saudi Arabia was created by the Worldmapper team. Densely populated areas appear bloated, the area of ​​sparsely populated areas is reduced. The shape of the grid has been preserved; an underlying map with the original geographical extent helps interpret the map. The distorted map should help to present abstract statistical information clearly. 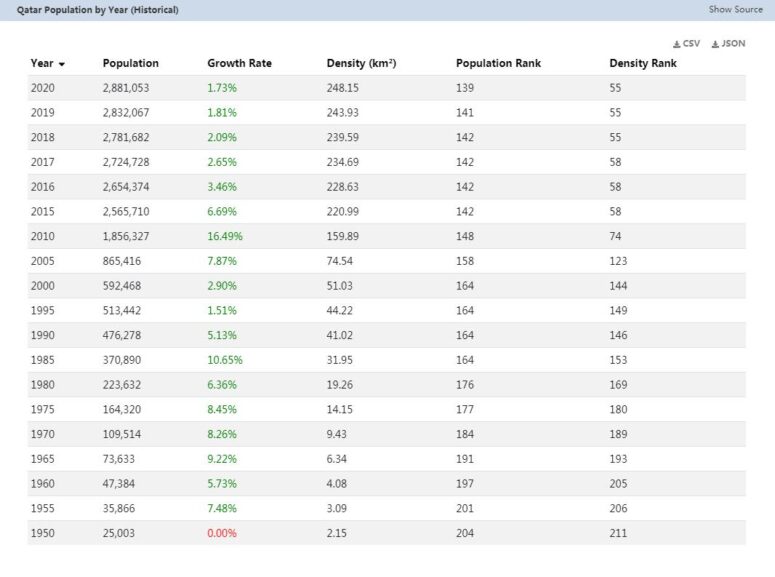