The Kingdom of Saudi Arabia is located in the Near East on the Arabian Peninsula. Bordering countries are Jordan, Iraq, Kuwait, Qatar, the United Arab Emirates as well as Oman and Yemen.

The kingdom houses the two holiest sites in Islam, the Kaaba in Mecca and the resting place of the Islamic prophet Mohammed in Medina.

The modern capital Riyadh stands on the foundations of the first city conquered by Ibn Saud. In 1902 he stormed the Qasr al Masmuk fort. Except for this fortress and some traditional palaces, little of the old town has been preserved. Beautiful excursion destinations in Nedsch are Diriya, Wadi Hanifa, Shaib Laha and Tumair.

Mecca, the spiritual center of the Islamic world, as well as Medina, can only be entered by Muslims. Interesting is the caravan city of Qaryat-al-Fau in the south of the kingdom with the temple of Najran and the nearby ruins of the old cities of Timna and Shiban, which are surrounded by banana, lime and pomegranate groves.

In total, more than 29 million people live in Saudi Arabia. However, several million are legal foreigners who are settled in Saudi Arabia. The country is located in a very dry climate zone, since the rural regions offer few opportunities, most people live in cities or in the few oases. The people originally living here were Arabs. Even today, the people living in Saudi Arabia are 90 percent of Arab descent, they are either Saudis or come from the Arab world (Egyptians, Jordanians, Syrians or also Lebanese and Palestinians). The “non-Arabs” are mostly people with African or Asian roots. Over 400 tribes still live in Saudi Arabia, of which about a tenth migrate through Saudi Arabia as semi-nomads or nomads. Saudi Arabia is a guest worker country. Several million foreign workers work here. These guest workers largely take over the areas in which Saudis do not want to not work.

Form of government: Saudi Arabia has been an Islamic absolute monarchy since 1932. The constitution dates from 1993 and Islam is used as the basis for laws. The National Consultative Council (Majlis al-Shura) consists of 120 members. The legislature, executive and jurisdiction are with the Saudi king, he is also the spiritual leader in the country (guardian of the holy places).

Language: The official language in Saudi Arabia is Arabic. English is also spoken in the business environment.

Religion: 100% Muslims, especially Sunnis, in the Eastern Province of Shiites.

Local time: CET + 2 h.
There is no changeover between summer and winter time in Saudi Arabia.
The time difference to Central Europe is +2 h in winter and +1 h in summer.

Saudi Arabia takes up about 80% of the Arabian Peninsula. In the northwest, the country borders Jordan, Iraq is its northern neighbor, Kuwait is in the northeast, Qatar, the United Arab Emirates and Oman are in the southeast, in the south of Yemen. Bahrain is connected to Saudi Arabia through the King Fahd Causeway.

The course of the border is very straight, especially in the north, since it was created by the former colonial powers at the negotiating table.

You can find an accurate topographic map of Saudi Arabia here.

Sea access exists in the east to the Persian Gulf and in the west to the Red Sea.

A moist, hot, narrow coastal strip (Tihama) extends from the Red Sea, made of lava rock and large wetlands.

In parallel to this coastal plain, an extensive, largely inhospitable plateau rises steeply to around 2000 m, in the southwest (Asir Mountains) the highest point in the country is reached at 3,133 m (Jabal Sauda). This plateau occupies most of the Arabian Peninsula.

Semi-deserts are located in the extreme north (An Nafud) and in the center (Nedsch).

In the east, the highlands fall gently to the Persian Gulf. The Gulf Coast is characterized by salt flats and swamps.

This map of the population distribution in Saudi Arabia, Bahrain and Qatar was created by the Worldmapper team. Densely populated areas appear bloated, the area of ​​sparsely populated areas is reduced. The shape of the grid has been preserved; an underlying map with the original geographical extent helps interpret the map. The distorted map should help to present abstract statistical information clearly. 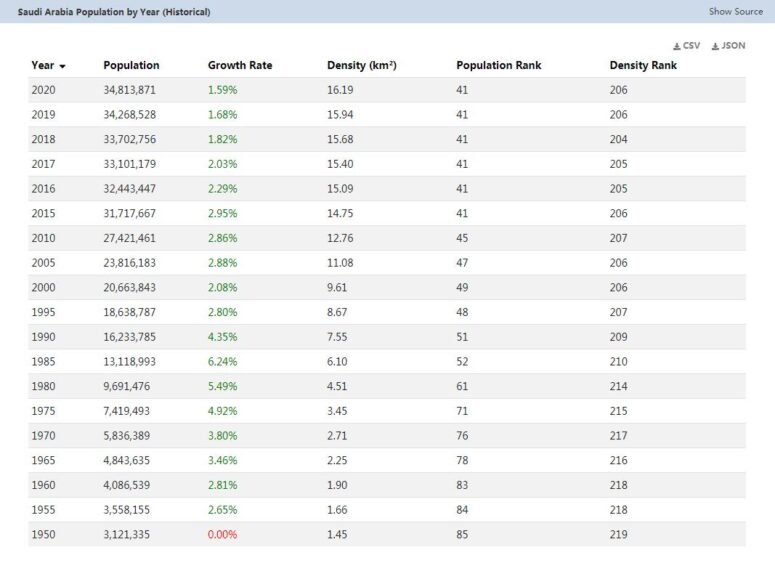 The climate in Saudi Arabia is mostly hot and dry. In the interior of the country, the continental influence between day and night can lead to large temperature differences.
From May to September, the temperatures reach 45 °C during the day, and the coast remains a little cooler. In the middle of winter (December to January) the temperatures in the big cities (with the exception of Jeddah) do not reach 20 ° C, in some places (especially in the central deserts) there can be frost at night. In winter the mountains can be covered in fog.

In the southern coastal areas it rains fairly regularly with high summer humidity, in the capital Riyadh and the northern parts of the coast of the Red Sea it rains very little. Most of the low rainfall falls from November to January.