Syria is located in the Middle East and part of the Mashrek. Syria borders Israel and Jordan in the south, Lebanon and the Mediterranean in the west, Turkey in the north and Iraq in the east. The 2,330-long Euphrates River crosses the country for 600 kilometers, making it the longest river in Syria.

Damascus, the capital of Syria, is the oldest continuously inhabited city in the world. The showpiece of the city is the Ummayyad Mosque, whose history dates back to the ninth century BC and reflects the eventful history of the city. A stroll through the Al-Hamidiyyeh bazaar should not be missed.

Bloudan and Zebadani are very close to Damascus. A trip to the Tel Shehab waterfalls in the south of this region is worthwhile. In the middle of the country, Palmyra lies in a desert oasis. The valley of the tombs and the triumphal arch are particularly worth seeing in this city. These ruins are among the most important structures in the Middle East.

Syria uses its area to a large extent for agriculture and agriculture. These are responsible for up to a third of Syria’s total economic output. In addition, oil, textiles and food are very important for the Syrian economy. The country’s trade balance is positive due to the export of food.

Most tourists who travel to Syria do so as part of cultural and language tourism. The coastal areas are surprisingly little visited by foreign tourists and so the beaches mostly use only locals.
Tourists mainly travel to the Syrian cities of Damascus and Aleppo that not only have the necessary infrastructure, but also house a variety of sights.
The ancient city of Palmyra is also popular in Syria. The medieval castles found in the west of Syria are particularly worth seeing. The Hauran areas in the south of Syria show numerous ruins, including the ruins of Borsa. Excavation sites on the Euphrates are also at the center of tourist interest.

Form of government: Syria has been a presidential republic since 1973, the constitution dates from the same year. The unicameral parliament (People’s Assembly) is made up of 250 members. Syria has been independent of France since April 17, 1946.

Language: The official language in Syria is Arabic. The minority languages ​​Kurdish, Armenian, Aramaic and Cherkessian are also spoken. English and French are sometimes spoken.

Religion: Sunni Muslims 74%, other Muslims such as Alawites and Druze 16%, Christians 10%, small Jewish minorities in Damascus, Aleppo and Al Qamishli.

Syria is on the west by Lebanon limited and the Mediterranean Sea, the northern neighbor is Turkey, located in the east of Iraq, in southwestern Jordan, in the southeast of Israel.

You can find an accurate topographic map for Syria here.

The Alawite Mountains extend parallel to this coastal plain at a distance of 20 km. The eastern slope drops steeply to the fertile Orontes plain.

The Orontes plain is separated from the Syrian plateau by a mountain range running in a north-south direction. Further south the plain is shielded from the Antilibanon Mountains with the highest elevation in Syria (the 2,814 m high Hermon (Arabic: Dschabal asch-Sheikh)) in a westerly direction. There are numerous sources of smaller, year-round rivers that enable oasis management. Among other things, the river Barada irrigates the oasis Ghuta that surrounds Damascus.

The Syrian Desert lies in the southeast and east of Syria. Several smaller ridges rise in the interior of the desert, the terrain gradually sinks towards the Euphrates depression. The Euphrates flows through the northern foothills of the Shamiya Desert on 676 km in northern Syria. Here is the fertile Jazira plain. In the south-eastern part of the country is the volcanic Hauran massif with the Jabal ad-Druz, further west is the Hauran plain. The main rivers in the country are the Euphrates and the Orontes.

This map of population distribution in Syria was created by the Worldmapper team. Densely populated areas appear bloated, the area of ​​sparsely populated areas is reduced. The shape of the grid has been preserved; an underlying map with the original geographical extent helps interpret the map. The distorted map should help to present abstract statistical information clearly. 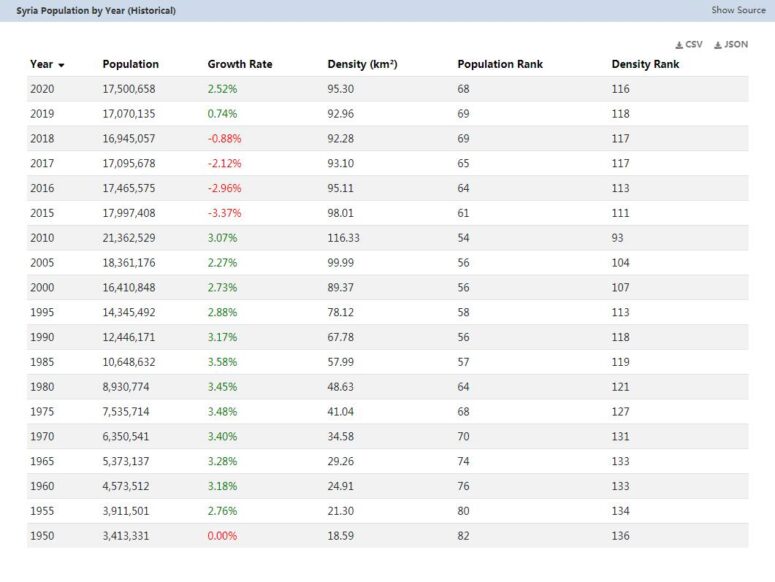 In the west of Syria there is a Mediterranean climate with hot, dry summers and mild, humid winters. The annual rainfall is about 500 mm, the majority of the rain falls between November and April. The average maximum temperature on the coast is 31 °C in summer (July) and 10 °C in winter (January). Inland, it is becoming increasingly dry and inhospitable. In the steppes where most of the Syrian cities are located, temperatures are a few degrees higher than on the coast, and temperatures of 45 °C can be reached in the desert. The east of the country is dominated by continental, summer-hot and dry steppe and desert climates. At the end of summer, hot Khamsin winds sometimes appear from the east. The average annual rainfall here is very low at around 11 mm.