Afghanistan is often divided into 26 provinces . The chief ones are: Kabul , with the capital of that name, the seat of the Shah, and 60,000 inhabitants, – Laghman , with the glorious valleys of Swat, Bunir, and Bathshaver, – Thotsh , of which the fortress of Attock on the Indus is the chief town, – Peshawer with the capital of that name with 100,000 inhabitants in a mildly watered plain, — Jelalabad with the merchant city of that name, and with the ruins of the ancient capital Ghasnah, — Siwi with a capital city of the same name in a low plain, — Shikapur with a small but merchant capital of the same name, — Kandahar with a capital that bears the same name and has a population of 100,000, — Herat , which has a similar population in its equally so-called capital, — Balkh , ancient Bactriana, etc. The ancient history of Afghanistan lies in the darkness of the past. Several times the inhabitants crossed the Indus to take possession of the Indies. In 1504 the sultan Baber. conqueredof Samarkand, the territory of Kabul, and founded the Empire of the Greater Mughal at Delhi. The Afghans found it difficult in the long run to relinquish their dependence, and in the middle of the eighteenth century Ahmed – shakh , of a distinguished family of Abdalli, declared himself independent ruler of Afghanistan at a Diet at Kandahar. Soon he was also called by Nassir , the mightiest Khan of Baluchistan, recognized as overlord, and assumed the title of Dordoran, pearl of the times, a name which passed on to the tribe and indeed to the whole empire. An unlimited dominion was by no means his share, but he sought to magnify the splendor of his property, and to unite the rest of the tribes with splendid battles. After his death, his son Timur ascended the throne. This one bathed in wealth and pleasure. Mutiny and conspiracies followed, and when he died after a twenty-year reign, Afghanistan was torn apart by factions. Timur’s two sons, Mahmoud and Siman , seized the crown and delivered (1794) a bloody battle on the banks of the Hilmend. Siman the younger son was victorious, and Mahmoud took flight to Herat. Later, however, assisted by mighty tribes, he conquered Kandahar and Kabul and overthrew the throne of Siman . However, he was dethroned by a still younger brother named Shudsjah and thrown into prison (1803). Again, aided by ill-advised persons, Mahmud regained his former dignity (1809), but was forced to lay it down 14 years later, and died in 1829 with his son Kamran at Herat. After that time, Afghanistan was divided into 4 regions. In that of Kabul, Dost. reigned – Muhammad as the model of an Eastern monarch – in that of Kandahar Kohen – Dhil reigned – in that of Herat Mahmoud’s son Kamran , who depended there on Persia – and in that of Peshawer Serdar Sultan Mohammed , a brother of the governor of Kabul. See carswers for Afghanistan political system.

According to cheeroutdoor, Afghanistan is an agricultural country, 90% of its population lives in rural areas. Afghanistan, even before the start of the civil war of 1979–2001, was among the most backward countries in the world in terms of economic…
Read more

Following the initial invasion of the country by US and British troops, a second operation was launched, now by the International Security Assistance Force (ISAF), which was established by the United Nations Security Council in late June. December 2001 to secure Kabul…
Read more

Daud’s regime The 17 of July of 1973 was overthrown the monarchy 40 years of Mohamed Zahid Shah. The then Prime Minister, Mohamed Daud, proclaimed the Republic and became President. Socialist revolution and Soviet aid In 1978, a Revolution, led by the People’s Democratic Party of Afghanistan (PDPA),…
Read more

First residents The first settlers of present-day Afghanistan date from the Middle Palaeolithic. The first cities would appear with the Sortugai culture in the 4th century BC. n. and. From the second century on, various Iranian and Aryan tribes settled on Afghan soil and later, Cyrus the…
Read more

CULTURE The cultural history of Afghanistan boasts millennial origins and, above all thanks to the particular position of this land, a crossroads of peoples and experiences in continuous movement, since ancient times it has been configured as the result of…
Read more 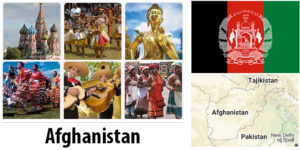 Afghanistan is an important interface between South and Central Asia. The country has many facets and has been a popular travel destination in the past. It is above all the Buddhist and Islamic culture that make the country and a…
Read more