The island of Taiwan lies off the Chinese mainland in the West Pacific, separated by the Taiwan Strait. Taiwan is the main island of a group of 78 islands. The central mountain range covers most of the land mass and runs along the east coast from north to south. More than 60 peaks are over 3,000 meters high, the Yu Shan (Jadeberg) with 3,952 meters is the highest and most densely forested elevation. The 64 islands of the fishing islands, which the Chinese call Penghu, lie west of the main island. The Quemoy and Matsu island fortresses belong to Fujian Province.

In the capital city of Taipei, the tallest skyscraper in the world up to 2007, the Taipei 101, almost reaches the clouds at 508 meters. This masterpiece has 101 floors. In the island metropolis, the Chung Cheng Memorial Hall is an example of classic Chinese architecture. Outside the capital, there are 220 temples in the oldest city, Tainan, among them the most impressive examples of Confucian temple architecture in Taiwan.

Taiwan has a tropical climate in the south and a subtropical climate in the north. The climatic conditions made it possible that almost all of Taiwan was covered with forest until a few centuries ago. But when the Japanese took control of the area, the forest was cleared on a large scale. The forest was also enormously reduced during the Second World War. The wood was used for military purposes.

However, the forest was gradually reforested. Today people are proud that 55 percent of the country of Taiwan is again covered by forests and cultivated land. In the mountain regions you will find cypress, juniper, fir, pine, spruce, bamboo and azaleas as well as deciduous trees.

The animal world has also suffered great damage in the past. Industry, especially on the western coast of Taiwan, has caused great damage. Numerous bird species lived here, almost all of which have now disappeared.

Form of government: Taiwan has been a republic since 1911. The constitution dates from 1947, the last constitutional change was made in 2000. Much of the political power is spread across five government bodies (yuan): executive, legislative, judicial, audit and control. The Executive Yuan is comparable to a cabinet headed by the Prime Minister. The Legislative Yuan, the parliament of Taiwan, has been made up of 113 members who are elected every four years since 2008 (73 members are elected in general elections, 34 are determined by proportional party strengths, 6 are elected by the indigenous people).

Language: In Taiwan, the official language is Chinese (Mandarin). Dialects such as Taiwanese (Min) and Hakka dialects are widespread. In tourist regions, many Taiwanese people speak a little English, while taxi drivers usually only speak Chinese.

Local time: CET + 7 h
In Taiwan there is no change between summer and winter time.
The time difference to Central Europe is +7 h in winter and +6 h in summer.

Mains voltage: 110 V, 60 Hz. The plugs in Taiwan have flat poles (such as the USA), adapters can be obtained in Taiwan.

The island of Taiwan (called Formosa by Portuguese explorers) is the main island of an archipelago off the coast of China, it occupies 98% of the land area of ​​this archipelago, 2% spread over the other islands (such as Orchid Island or the Pescadoren Islands).

The size of the republic corresponds approximately to that of the state of Baden-Württemberg. The maximum length is 394 km, the maximum width 144 km. Taiwan is located between 220 km and 130 km off the southeast coast of China, only separated by the Taiwan Strait. The shallow East China Sea lies to the north, the South China Sea to the southwest, and the Philippine Sea to the east. In the south, Taiwan is separated from the Philippines by the Luzon Strait.

The island is characterized by the contrast between the rugged mountains that run in five mountain ranges from north to south in the eastern three quarters of the island and the flat, gently undulating flood plains in the western quarter, where most Taiwanese live. Taiwan’s highest point at 3,952 m is the heavily forested Yu Shan, there are five other peaks higher than 3,500 m and a total of more than 60 peaks higher than 3,000 m. This makes Taiwan the world’s seventh highest island. The Taroko National Park is located on the mountainous eastern side of the island and is characterized by mountainous terrain, gorges and a fast flowing river.

The island fortresses Quemoy (Kinmen) and Matsu belong to the Chinese mainland province of Fukien.

Taiwan, like Japan, is affected relatively often by earthquakes, which requires high security standards in building and infrastructure construction.

This map of the population distribution in Taiwan was created by the Worldmapper team. Densely populated areas appear bloated, the area of ​​sparsely populated areas is reduced. The shape of the grid has been preserved; an underlying map with the original geographical extent helps interpret the map. The distorted map should help to present abstract statistical information clearly. 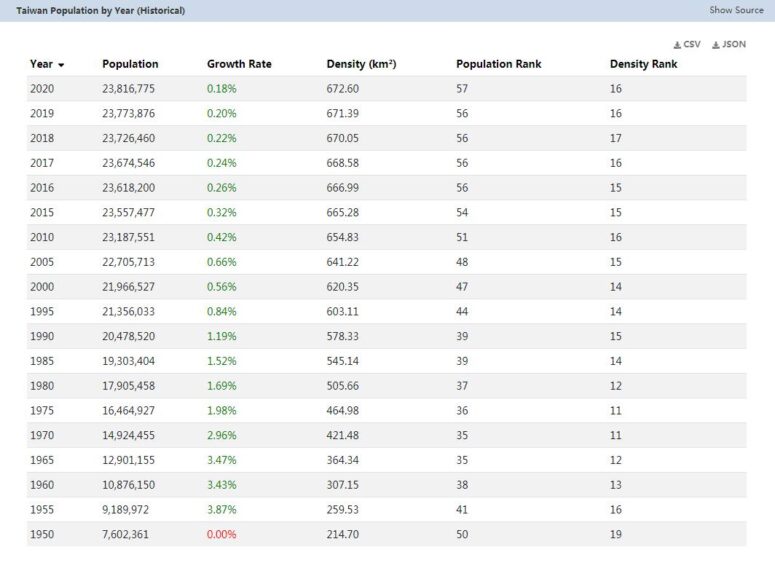 Though subtropical in the north and tropical in the south, the mountains can be cool in summer (June to August) and covered in snow in winter (December to February). The dry season lasts from November to January in the north, and extends to April in the south. Summer is hot and humid in the lowlands, and heavy rains occur in the mountains during this time. The highest temperatures in Taipei reach around 33 °C in summer and 19 °C in winter, while in the warmer southern regions in winter, peak temperatures of around 24 °C are reached during the day. In winter, cool Central Asian monsoon winds can sweep the island and drop the temperature to 10 °C within a few hours. Typhoons can occur from June to October.