Tajikistan is located in Central Asia. It borders Afghanistan, Uzbekistan, Kyrgyzstan and China. Most of the country is high mountains. The east of the country is dominated by the Pamir Mountains and most of the Pamir Highlands. There is also the highest mountain, the 7,495 meter high Ismol Somoni peak. The Altai mountain range extends to the north of the country. Only in the far north does Tajikistan and the Ferghana Valley have lowlands.

The economic and cultural center is the capital Dushanbe. Visitors can retrace the country’s changing history in the city’s museums. A visit to the National Museum and the Behzod Museum of History and Geography is recommended. The political influence of Russia still shapes the cityscape today, among other things recognizable by countless monuments and religious buildings. Mosques, on the other hand, represent the strong Islamic influence. Dushanbe is currently preserving what is arguably the largest Buddhist monument in Central Asia, the 60-piece Buddha figure from the temple complex near Kurgon-Treppa.

Agriculture is important for the economy of Tajikistan. On average, it makes up about a third of the country’s total economic output. Only 7 percent of the country’s area can be used for agriculture at all. The cultivation of cotton is particularly profitable, making cotton the most important agricultural product in Tajikistan. Vegetables, fruits and also cereals and tobacco are only grown for personal use. Most of the water for agriculture is drawn from the Pyanj river, which gradually dries up. The massive irrigation of the soil contributes greatly to its salinization.

Another important economic factor in Tajikistan is the keeping of cattle, sheep and goats. In addition, silkworms are grown in large quantities.

In Tajikistan there are deposits of aluminum, oil, natural gas and also lignite. Tajikistan also exports electricity generated by hydropower.

Form of government: Tajikistan has been a presidential republic since 1994, the constitution dates from the same year. The last constitutional change was made in 1999. The Parliament (Madschlisi Oli) is made up of 96 members. Tajikistan gained independence from the Soviet Union on September 9, 1991.

Language: The official language in Tajikistan is the Persian language Tajik (belongs to the Iranian language group). At least five different languages ​​are spoken in the Pamir Mountains, languages ​​related to Old Iranian. Russian is widely used in administration and business. English is often spoken in tourist companies.

Local time: CET + 4 h.
In Tajikistan there is no change between summer and winter time.
The time difference to Central Europe is +4 h in winter and +3 h in summer.

The Central Asian Republic of Tajikistan is bordered in the north by Kyrgyzstan and Uzbekistan, in the south by Afghanistan and in the east by China.

Here you can find an accurate topographic map of Tajikistan.

The vast majority (93 percent) of the country is occupied by mountains, with the Pamir highlands in the east of the country dominating. The highest point of Tajikistan is located in the Pamir at 7.495 m Pik Ismoil Somoni (formerly Pik Communismus). The Alai mountain range extends in the northern part of the country.

Almost half of the country is located at altitudes above 3,000 m. Lowlands that can be intensively used for agriculture can only be found in the Ferghana Valley in the far north of Tajikistan, most of the country can only be used for livestock farming.

In winter, due to extensive mountains and a lack of infrastructure, it is only possible to reach the northern or eastern part of the country with detours via Uzbekistan or Kyrgyzstan.

The largest natural lake in Tajikistan is the 380 sq km Kara-Kul in the eastern part of the country. The largest reservoir is located on the Syrdarja river: the 520 sq km Kairakkum reservoir.

This map of population distribution in Tajikistan was created by the Worldmapper team. Densely populated areas appear bloated, the area of ​​sparsely populated areas is reduced. The shape of the grid has been preserved; an underlying map with the original geographical extent helps interpret the map. The distorted map should help to present abstract statistical information clearly. 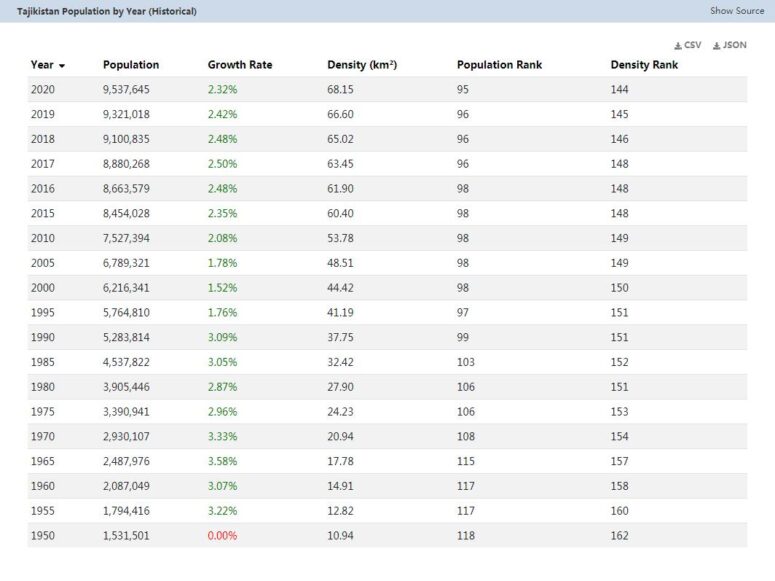