The Israel city of Tel Aviv has almost half a million inhabitants, and is a lively and exciting city that never sleeps. The city is large enough to give you everything you expect from a big city, at the same time as it has a coastline towards the Mediterranean, and can thus provide a beach holiday while you are on a city holiday. Tel Aviv is not the capital on paper, but many foreign diplomats still use the city as if it were, as they do not necessarily recognize that Israel has the right to use Jerusalem as its capital.

Many people think Tel Aviv is a quiet and conservative city, but those who think this could not be more wrong. Tel Aviv is known as “the city that never stands still” because of its incredible life. It is full speed even in the middle of the night, whether you are at a bar, restaurant or nightclub. Even the beach is usually good with people even late at night. Once you have been to Tel Aviv, you understand what is meant by the nickname.

Although the city is located in Israel in the Middle East, it is a dynamic city that is open to modern attitudes. The city has supposedly the world’s largest selection of vegan restaurants, and is considered one of the largest technological cities in the area. Due to the conflict between Israel and Palestine, there are strict security checks throughout the city, but you will hardly notice the conflict much in the same way as you do when you visit Jerusalem . 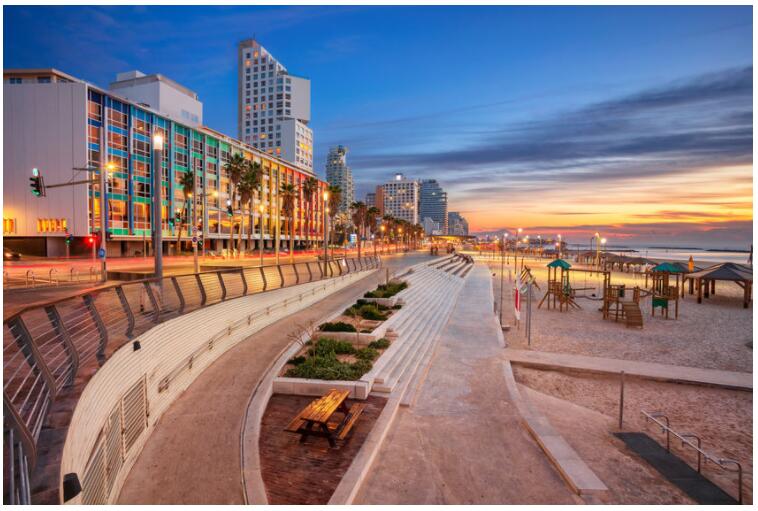 Tel Aviv is the perfect city for anyone who loves food, and there is a huge selection of food from all over the world here. It is also very cheap whether you eat street food, in a cafe or in a proper restaurant. The city has some historic buildings and places, but it is far from the same concentration as one finds in the neighboring city of Jerusalem which is only an hour away.

The beach in Tel Aviv is over a mile long, and you can at any time find a place where you can cool off in the lovely Mediterranean waters. Along most of the beach there is also a cozy beach promenade where you can walk down and look at the beautiful city.

If you want to swim in the Dead Sea, it is about two hours from Israel by car, and you also get to see some of Jerusalem on the road. Remember to calculate plenty of time if you are traveling by public transport, as there are usually strict safety checks before you can board a bus, train and the like.

You pay with the Israeli shekel in Tel Aviv and the rest of Israel, and the price level is quite high. In Tel Aviv you do not have to worry about staying overnight in decent places as you do in Jerusalem, but it is still not a particularly cheap destination. There are good opportunities for shopping in Tel Aviv, and here you have everything from giant shopping malls that have hundreds of shops, to small and cozy individual shops that sell small items. It is worth taking a trip to Carmel Market where you can get primarily fruit and vegetables, as well as clothes.

It takes about 5 hours by direct flight from Oslo to Tel Aviv, and in terms of price it is between two and three thousand kroner for a return ticket. Only Norwegian flies directly, but it is also possible to take a stopover if it suits you better.