The Prehistory of India

India’s prehistory revolves around India in prehistoric times. Prehistoric archeology in India has been largely overshadowed by historical archeology and art archeology. Some periods, such as the middle part of the Stone Age and the time between the cessation of Indus culture around 1500 BCE. and the Hellenistic influence of the 300s BCE is little known.

Only northwestern India has been systematically explored. Here, since the early 1920s, large-scale excavations have been carried out in Indus culture’s urban highlands, and at the same time, more attention has been paid to the older Stone Age finds that occur in abundant numbers from northwestern and southeastern India. They all have distinctive Early Paleolithic character and may date to some extent in relation to the five successive glacial periods (ice ages) of the Himalayan region, which probably correspond to the second and third ice ages and three maxima of the last ice age in Europe, and the same number of pluvial periods (rainy periods) in South and Central India.

The oldest finds are from the North and Central Indian pre- Soan industry, from the second North Indian ice age. Spotting tools have been found with no apparent kinship with any other paleolithic culture. The other discoveries are divided into two groups that mainly belong to the Third Ice Age.

The Northwest Indian Soan culture joins the Asian chopper complex with tools of pebbles and primitive stains. At its oldest stage it is limited to the Soandalen; later it becomes more differentiated, it occupies a Levalloisia- like staining technique, gets a wider spread and exerts some influence on the more developed stage of Madras culture. It is a limestone industry that constitutes a strangely isolated, Southeast Indian colony of the African-European Abbevillien / Acheuléen complex. 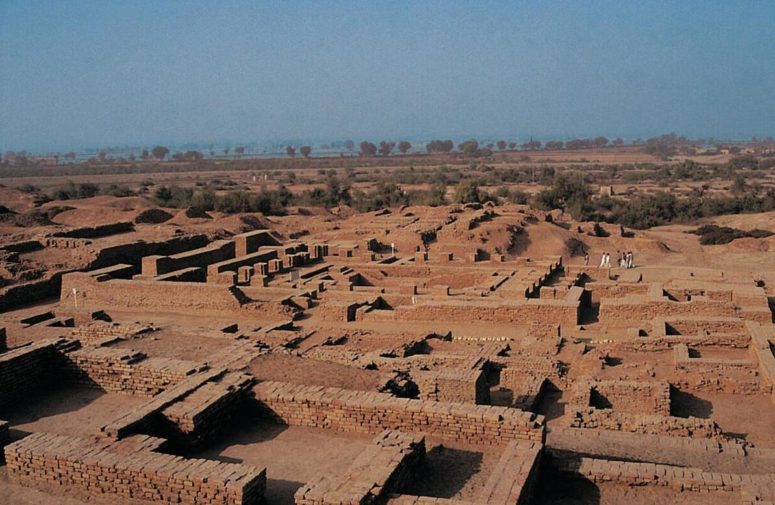 The village and urban communities of the early agricultural culture, from about 3000-1000 BCE, are so far only known from northwestern India. It has an unmistakable West Asian character, although the Indian characteristics can be very strong and although one cannot usually find the direct western origin of the individual groups.

How early village and urban communities appeared in India is still uncertain; a few finds of a completely Neolithic character, for example from the deepest layers of the urban mound at Rana-Ghundai in northern Baluchistan, can be formally compared to the oldest village communities in Iran and Iraq and are at least no younger than the end of the circa 3000s. At this time, a seemingly fully developed village culture appears in the mountainous country west of Indus; only in the south, in the present Sind, the settlement extends all the way down to the river valley.

The finds are mostly randomly collected from small town heaps and consist essentially of painted pottery, which makes it possible to divide the entire complex into geographically and chronologically distinct groups.

In southern and central Baluchistan and partly in Sind you will find the Quetta pottery from the late 3000s, the Amri-Nudra-Nal pottery from about 3000 and the Kulli pottery that first appeared some time in the 2000s and has a more limited distribution to the Kolwan district of southern Baluchistan.

The purely geometric patterns of Quetta pottery show a relationship with Iran and Turkestan. Especially Kulli-ceramics are also richly decorated with friezes of animal and plant motifs. It is closely related to certain groups of Iranian pottery, especially from Bampur in eastern Persia, while influences from Mesopotamia in the early dynastic period have probably been mediated by direct trade. In Northern Baluchistan, the very fine ceramics of Zhob culture with geometric and animal motifs are generally related to Northern Iranian pottery from the late 3000s onwards. It characterizes the findings of the second and third settlement strata in the urban mound at Rana Ghundai, the only one of the northwestern Indian mounds whose stratigraphy one has some more detailed knowledge of.

By the way, we know very little about the material culture of these rural communities. Some of the cities have probably been fortified; the houses have been partly built of stone, partly of sun-dried bricks and clay. The implements are mostly of flint and stone, but copper and bronze have been known. The burial customs are varied and include both burnt and unburnt burial; small clay figures of animals and women may have been toys or cult objects.

About 2500 BCE a new and higher urban culture is emerging all over the Indus Valley. The Indus culture is broadly comparable to the early Sumerian city ​​states, but has in every detail a strong local Indian feel. Some of the town highlands in Sind form a direct continuation of Amri villages, and the urban culture is at least partly concurrent with and has exerted some influence on a younger phase of the Amri-Nal-Zhob and especially Kullik cultures.

After the sudden rise of Indus culture around 1500 BCE. there are no traces of organized urban communities. The upper settlements in Harappa thus consist of small cabins without any kind of regulation. However, many features in the material culture continued, such as the painted pottery. During the 1000s, the cultivation of rice and millet was incorporated into arable farming. The way of living was uniform across large areas. The people lived in camp huts, ran fields and farms and had tools of stone and copper. The iron was introduced around 1000 BCE, but did not lead to any sharp distinction in cultural development.

At about the same time as the Iron Age, a burial custom with large stone chests was marked with stone circles or rubble. In such megalithic tombs, tombs have been found which include, among other things, ceramics and tools and weapons of iron. However, no housing has been discovered from this period. In Gangessletta, a cultural group, separated by a type of painted, gray ceramics, is interpreted as traces of Aryans in the period 1000–600 BCE.