Chinese theater represents one of the oldest theater traditions in the world. Early precursors are found in cultic dances and songs, and from the Han Dynasty in the 200s BC. one knows that there were mimics engaged at the court. During the Tang Dynasty 618–907, a form of musical theater was fully developed. From the time of the Han Dynasty, there were fixed figures, such as the main character canjun and the bifurcation cangu, and improvised dialogues were used without any early action developing. In the 700s, Emperor Ming Huang founded the first acting school, which educated up to 300 students at a time. Zhu-gong Diaowas the first scenic form of expression that used a longer course of action, and that was through the use of words and song. This was during the Song Dynasty 960–1279. 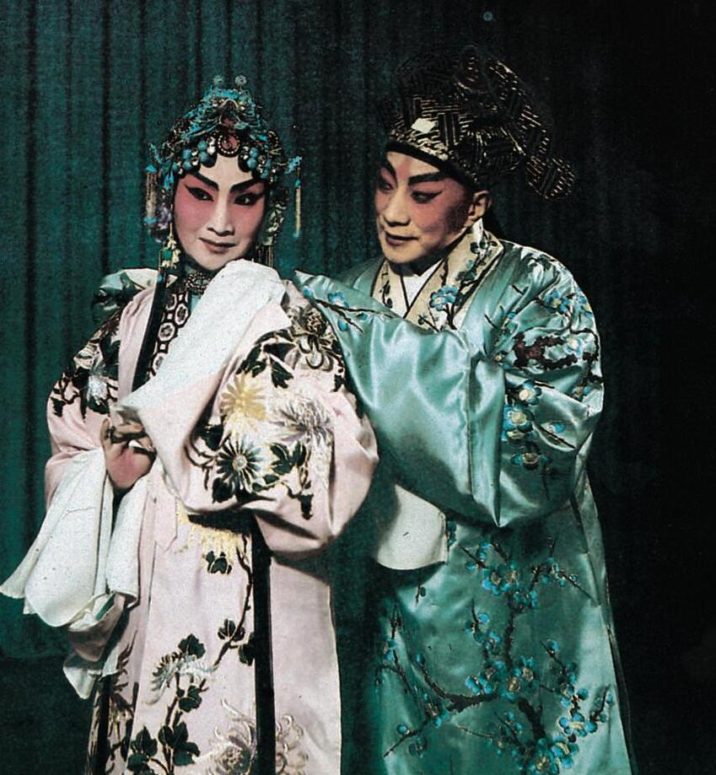 Tang Xianzu lived simultaneously with Shakespeare. Among his many dramas are Peonpaviljongen, which has given him a unique position within the Chinese drama. Here we see two famous Beijing actors in an act from this drama, 1956.

A fully-developed theater that utilized continuous action and dialogue dates from the Yuan era 1280–1368, and it was through a synthesis between music, dance, and dialogues that was both spoken and sung. The actions were taken from professional folk narrators. A northern dramaturgical variant was zaju, which consisted of a prologue and four acts. In this mix of spoken and sung dialogues, there developed also own rollefag. During the time of the Yuan dynasty, significant drama developed on the basis of zaju, and it gained significance far beyond China by being emulated by later European playwrights such as Voltaire, Goethe and Brecht. The names of Chinese individual dramatists from this time are Guan Hanqing, Wang Shifu and Li Xingdao. 550 titles of dramatic works are known from the Yuan era.

Then followed the Ming Dynasty 1368–1644 with special development of singing games, such as the Kunqu direction, which, with its 250 titles, along with the repertoire from the Yuan era, formed the trunk of the classical Chinese repertoire. From that time, a wide range of regional theater forms also developed at the intersection of spoken and sung dialogues, as well as the use of dance and acrobatics, such as the direction later called Beijing Opera. In addition to having kunquas a prerequisite, it took on local forms of singing from the Beijing area and got its final shape in the 19th century. One of the most well-known practitioners of our time, Mei Lanfang, through Brecht gained great importance for the development of Western play art.

It can be distinguished between two main directions in Chinese theater in modern times, namely the speech theater (huaju) and the musical theater (xiqu). At the beginning of the 20th century, Chinese intellectuals experienced the classical theater as stiffened and unfit to reflect contemporary problems. Therefore, it was patterned from Japan introduced European theater forms and a European drama, which was intended to convey a bourgeois and democratic attitude. The May 4 movement in 1919 would renew cultural life in this way, and plays were played by European playwrights such as Ibsen, Shaw, Maeterlinck and Hauptmann. It was about promoting the individual’s freedom, and in particular, freeing women from the traditional life situation. Chinese playwrights themselves wrote from this program and from European drama, such as Tian Han, Hong Shen and Xiong Foxi.

In the 1930s oriented Cao Yu after the ancient Greek tragedy. In connection with the socialist and communist movements, a large number of companies developed, and through the Japanese occupation nationalism also played an important role as a theme in the drama. Writer collections also developed, and names such as Tian Han and Zhang Min can be mentioned from this time. Despite many successful performances, the Chinese speech theater suffered from the notion that it had to be realistic or naturalistic in accordance with European designs. Thus, they had trouble seeing the value in their own, stylized traditional forms. In this way, modern theater became a concern for the big cities with their citizens and workers, and could not reach the large masses of the countryside. Therefore it had to some extent lose for the traditional musical theater who received greater appeal despite the fact that western tale theater was strongly supported under the People’s Republic. In the 1950s it was written much new drama which would reflect social changes in the new Communist China, represented by playwrightsLao She, Xia Jan and Hu Ke.

From the 1980s, controversy has arisen as to what theater really is and should be, and the need for experimentation has been sharpened. New Western influence has prevailed, and it is during this time that a director’s theater has established itself, although there have been key directors who have been asserting themselves ever since the 1930s, such as Hong Shen, Jiao Juyin and Huang Zuolin. The cultural revolution had paved the way for the importance of individuals and thus put a lid on the development of the regiteater in China. But from the end of the 1980s, the individual artist personality has again gained significance, which is also the case to a great extent the theater director.

It is still expected that theater people become involved in the societal issues, which has thus been a red thread through Chinese theater since the early 1900s. Experiment experiments are expressed in theaters such as Beijing’s Experimental Theater, which hosted the Ibsen Festival in Oslo in 1996 with a very interesting set up of An Enemy of the People. Influences from visual theater forms and performance are evident in smaller groups, which to some extent have been given the opportunity to show their work outside of China.

But many theater groups have been struggling in recent years since much of the state support has been taken away. On the other hand, large sums of money are spent on giant shows that also tour abroad

The musical theater also stands strong in modern Chinese theater; it has in particular been based on ancient folk traditions and has largely reflected Confucianism. More recently, however, work has begun to address more individual issues under the strong influence of international musical theater development. There is also European opera in China, and two major opera ensembles are located in Beijing. Likewise, there is a local opera, and puppet shows with shadow play are still strong. In recent years, many concert halls and amusement venues have been built around China, and, as mentioned earlier, huge gigs are being invested. 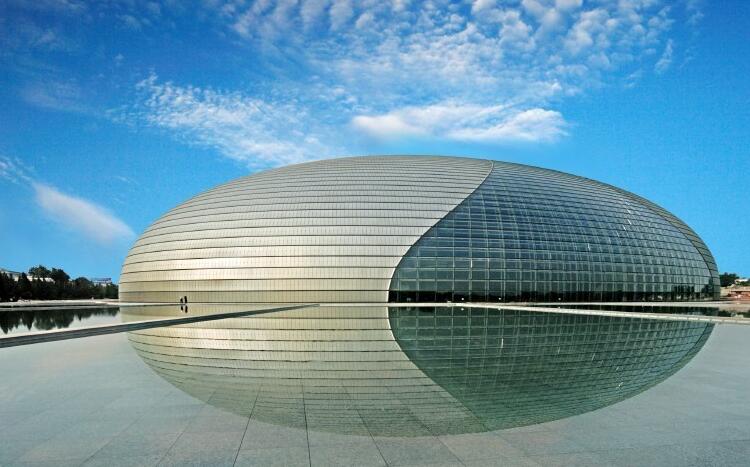 In the summer of 2007, Beijing’s new national theater opened. The theater was designed by the French architect Paul Andreu.