Turkmenistan is located in Central Asia on the Caspian Sea. Neighboring countries are Iran, Afghanistan, Uzbekistan and Kazakhstan. The landscape in Turkmenistan is characterized by the deserts and dry steppes. The largest part is taken up by the sandy desert Karakum, along which the rivers Amudarja, Murgab and Tedschen flow. The region’s continental climate ensures dry, hot summers and cold winters.

Tourists drawn to sunken desert cities on the Silk Road first discover the capital, Asgabat, the largest city in the country. It is located in an oasis in the Karakum desert, at the foot of the Kopet-Dag mountains, near the border with Iran. Important sights can be found on the Svovoda prospect. The art museum and the folklore museum are housed in a tasteful building with columns and oriental windows. A carpet museum is located next to the carpet weaving workshop in Ulitsa Kuragli.

The famous Akiliteken horses are bred not far from the metropolis in the Turkmenbaschi stud. The Firjusa Gorge in the mountains south of Asgabat is a popular destination in summer.

Turkemistan’s economy is largely based on trade in raw materials. The international relations that the country maintains are of great importance. The large deposits of natural gas and oil make Turkeminstan very interesting for numerous industrialized countries. Well-known major German companies also benefit from large Turkmen orders for the state telephone network, car bodies and high-tech.

The soil in Turkmenistan is not particularly fertile, but can be used for agriculture. The most important thing here is cotton production. Cotton plantations are often found in the north and south of Turkmenistan.
Gas, water and electricity are free of charge for residents of Turkmenistan. Nevertheless, many people in Turkmenistan live on the subsistence level and in poverty.

Lowest point: Vpadina Akchanaya, -81 m. (The water level from Lake Sarygamysh Koli in northern Turkmenistan fluctuates above and below the height of Vpadina Akchanaya (the minimum measured height is -110 m).

Form of government: Turkmenistan has been a presidential republic since 1991, the constitution dates from 1992. The bicameral parliament is made up of the National Assembly ( Mejlis ) with 50 directly elected members and the People’s Council ( Halk Maslakhaty ) with up to 2,500 members. Turkmenistan has been independent of the former Soviet Union since October 27, 1991.

Head of government and head of state: President Gurbanguly Berdymuhammedow, since December 21, 2006

Language: The official language in Turkmenistan is Turkmen (mother tongue for 72% of the population) Russian (12%), Uzbek (9%) is widely spoken. Other languages ​​make up 7%.

Local time: CET + 4 h.
There is no changeover between summer and winter time in Turkmenistan.
The time difference to Central Europe is +4 h in winter and +3 h in summer.

Approximately 80% of the country’s area is covered by the sand and debris of the Karakum desert. The Karakum extends between Amu-Darja and the Caspian Sea and was the largest desert area in the former Soviet Union. In the west of Turkmenistan there is the Türkmenbaşy plateau and the Great Balkans, which is up to 1,880 m high and descends southwards to the Karakum Canal (1,445 km the longest canal in the world).

In the south of the Karakum Canal rises the Kopet-Dag Mountains, which are mostly in Iran (highest peak in Turkmenistan 2,942 m, in Iran 3,191 m). Southeast Turkmenistan is reached by some foothills of the Gissar Mountains, the highest peak in the country, the 3,139 m high Ayrybaba, is located on the border with Uzbekistan.

This map of the population distribution in Turkmenistan was created by the Worldmapper team. Densely populated areas appear bloated, the area of ​​sparsely populated areas is reduced. The shape of the grid has been preserved; an underlying map with the original geographical extent helps interpret the map. The distorted map should help to present abstract statistical information clearly. 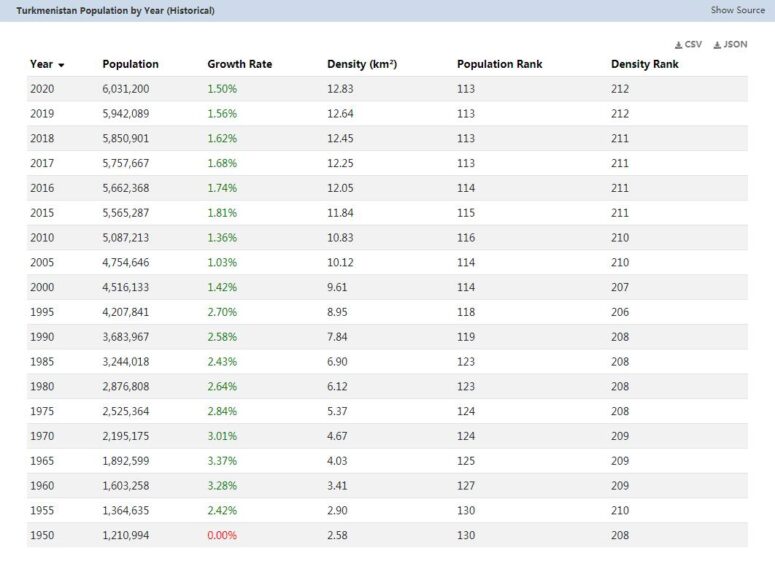