Uzbekistan is located in Central Asia. Its neighbors are Kazakhstan, Kyrgyzstan, Tajikistan, Afghanistan and Turkmenistan. Uzbekistan offers both deserts on the Aral Sea and fertile regions in the eastern Ferghana Valley. The Kysylkum desert is located in the southeast of the Aral Sea. Uzbekistan is relatively flat, only a few massive ones rise up. A steppe landscape extends further south, where the Amudarja flows. The summers in Uzbekistan are mostly hot and cloudless, the winters fickle and cold. The capital Tashkent is also the largest city in the country.

Tourism is still a young industry in Uzbekistan. One of the main attractions of the country is of course the Silk Road, which runs through almost the whole country. The most popular travel destinations in Uzbekistan include the historic cities of Samarkand, Khiva and Bukhara. Domestic tourism focuses on Chimgon and Berldersoy as they are relatively easy to get to from Tashkent.

Uzbekistan is a real wonderland for many tourists. The onion domes, the architecture that looks like something out of a fairytale from 1001 nights and the colors of the buildings are particularly fascinating for guests of the country. Despite this impressive architecture and beautiful cityscapes, tourism in Uzbekistan is still in its infancy. Uzbekistan has recognized the potential of tourism and is therefore building the infrastructure for it. This is still far from meeting international standards.

In recent times, more and more private pensions have entered the market, which are slowly but surely making serious competition for the established hotels. From a tourist point of view, Uzbekistan is best equipped with the Silk Road. The recommended travel times for Uzbekistan are May to June and September to November. The summer months can hardly be endured due to the great heat in Uzbekistan.

Form of government: Uzbekistan has been a presidential republic since 1992, the constitution dates from the same year. The bicameral parliament (Oliy Majlis) consists of the upper chamber, the senate with 100 senators and the lower legislative chamber with 120 members. Uzbekistan has been independent of the former Soviet Union since September 1, 1991.

Local time: CET + 4 h.
In Uzbekistan there is no change between summer and winter time.
The time difference to Central Europe is +4 h in winter and +3 h in summer.

Along with Liechtenstein, Central Asian Uzbekistan is the only country in the world that is exclusively surrounded by landlocked countries, so to get from Uzbekistan to the sea, you have to cross two state borders. Its southern neighbor is Afghanistan, Turkmenistan is in the west, Kazakhstan is in the west and north, Kyrgyzstan in the northeast and Tajikistan in the east.

The deserts are dominant in Uzbekistan, but the landscape is very diverse and ranges from the hostile deserts in the west to the fertile Fergana Valley in the east.

The once huge Aral Sea is located in the northwest of the country, the current area is about 17,000 square kilometers. The Kysylkum desert in the lowlands of Turan extends southeast of the Aral Sea (it covers about 40% of the area of ​​Uzbekistan and extends to Kazakhstan). There are only a few remaining massifs in this desert, in Gora Aktau they reach 920 m. A steppe landscape extends further south, where the Amudarja River also flows. In the southwest of the Aral Sea lies the desert-like Ustyurt plateau, which is protected as a nature reserve.

The east and south of the country are characterized by mountains: the Turkestan chain, the foothills of the Tianshan and the Adelunga Toghi.

Agriculture can be practiced mainly in the oases around Samarkand, Tashkent, Bukhara and in the Ferghana Valley.

This map of population distribution in Uzbekistan was created by the Worldmapper team. Densely populated areas appear bloated, the area of ​​sparsely populated areas is reduced. The shape of the grid has been preserved; an underlying map with the original geographical extent helps interpret the map. The distorted map should help to present abstract statistical information clearly. 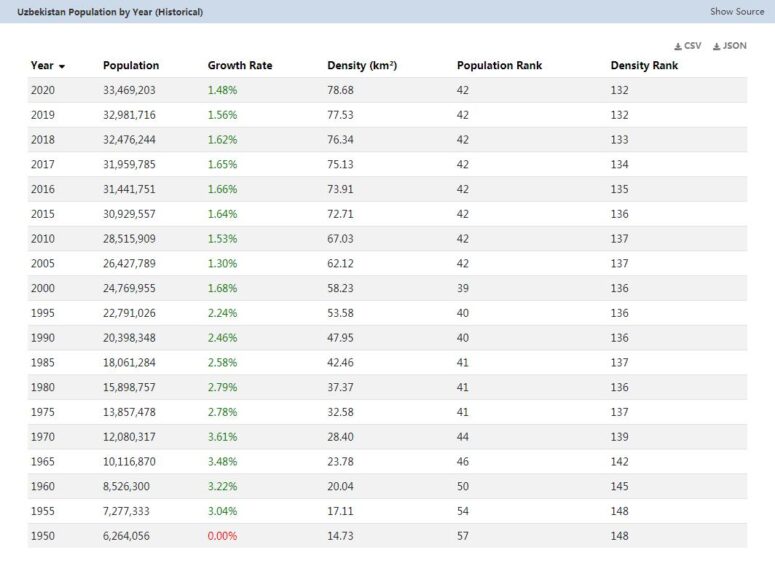 Uzbekistan is dominated by the continental desert climate. Summers in Uzbekistan are usually hot and dry with cloudless skies, but winters are cold and volatile.

The annual rainfall falls mostly between December and April and is low in most parts of the country (between 50 and 200 mm). The region of the Kysylkum desert is the driest. In the mountains, however, values ​​of up to 1,000 mm can be reached, in March and April it is very muddy here.

Overall, the humidity in Uzbekistan is very low.

The temperatures in Uzbekistan fluctuate strongly in the course of the year as well as during the day (up to 20 °C difference between day and night). The Uzbek lowlands can be very pleasant from May to early June and from September to early October. Midsummer (mid-July to August) is extremely hot with temperatures up to 40 °C in Tashkent and 50 °C in southern Uzbekistan. In winter (January to February), daytime temperatures range between around -5 °C to 10 ° C.

Average temperatures in Uzbekistan rise in a north-south direction, so it is cooler in the north than in the south.