Economic data: You can find a good overview of basic economic data in the CIA World Fact Book and on the World Bank website. The German GTAI regularly publishes compact economic reports and analyzes on Uzbekistan. The German Chambers of Foreign Trade endeavor to “present Uzbekistan by means of a current overview (for 2018) of the most important macro and socio-economic data as a promising economic and trading partner and to direct the readers’ attention to this emerging market that is currently opening and reforming dynamically.”

The main interlocutors in the implementation of development projects include the Ministry of Economy, Ministry of Finance, Chamber of Commerce and Industry of Uzbekistan, Center for Economic Research, Uzbekistan Banking Association. The Ministry of Agriculture and the Ministry of Investment and Foreign Trade also have their own databases. The Observatory of Economic Complexity offers common information including insightful visualizations on complex economic issues and developments in international trade with Uzbekistan.

Economic System & Its Sectors: Uzbekistan is rich in mineral resources such as natural gas, gold, oil, coal, silver and copper. The most important branch of the economy is agriculture with around 60% of the workforce and a share of around 30% of the GDP. Uzbekistan is one of the world’s largest cotton exporters. The dependence on cotton exports (one third of foreign exchange income) and the high demand for labor for the cotton harvest mean that every autumn children, young people, students and public service employees have to pick cotton for weeks under sometimes inhuman conditions without being adequately paid will. This practice is only slowly disappearing from everyday life.

Agriculture: The monoculture cotton was promoted in Soviet times at the expense of grain cultivation. This was accompanied by wasteful use of water reserves. However, Uzbekistan expanded its cereal acreage in the 1990’s and reduced the areas for cotton cultivation. The grain yield could be increased significantly; Fruit and vegetable growing is important. So far, Uzbekistan has only processed 11% of the harvest and exported 7%, so there is potential for development. Structural problems stand in the way of this (state-set prices, purchase quotas, lack of agricultural technology, etc.). Other important branches of agriculture are karakul sheep and silkworm breeding that are slowly gaining importance, especially for economically disadvantaged classes, as the following video shows:

The expectations to the new rulers Mirziyoyev are great that he finally abolish the “slave labor” in cotton fields. Until now, are his efforts in the sand run: Forced labor was officially banned by the government, unofficially it blooms even more.

Uzbekistan: Onions instead of cotton – prison for farmers(according to Independent News Agency Harakat & Central Asia Letter). According to dentistrymyth, the following example shows how unfree the Uzbek private farmers are still today. At the end of October 2009, Eshböri Dzhovliyev, a farmer who lives in the Uzun District, Surkhondaryo Region, was arrested on verbal orders from the regional governor and imprisoned in the Police Department’s isolation detention center. The farmer is accused of growing onions on an area of four hectares instead of the cotton required by the state plan. He has allegedly secured cover for the district board. When the regional governor Turobdzhon Dzhorayev heard this, it was established that it was allegedly a defamation that he had assured the district board of a share of the profits. Criminal proceedings were initiated against the farmer. What happened to the onions remained unknown.

Banking: In 1994 a banking reform began, which provided for a two-tier system with the country’s central bank and around 30 commercial banks. At the end of 2001 there were 38 commercial banks. The largest bank is the State National Bank for Foreign Economic Relations of the Republic of Uzbekistan. Other large banks: Uzpromstrojbank, Asakabank, Agrobank, Kapitalbank, Ipak Yuli Bank, Trustbank, UzKDB Bank, Halq Bank (fr. Sparkasse). The banking sector is largely state-owned and there is a lack of banking know-how. Of the 28 banks, only three are state-owned, but they dominate the market with a share of over three quarters of the assets. Lending to private companies and private consumers is still not widespread. The population also has low confidence in banks, as these are considered agents are seen the state. Among other things, the banks are obliged to pass on tax-relevant data and collect taxes.

The Dollar Exchange Rate: A Lesson In Uzbek Economics (According to Ferghana News Agency& Central Asia Letter): There are three dollar exchange rates in Uzbekistan: two state rates – one for financial operations, the other is the official exchange rate – and the shadow rate. Ordinary citizens only get the dollar at the shadow exchange rate in the bazaars and from private changers. Theoretically, they can purchase up to $ 5,000 per quarter at the official rate on presentation of their passport. If they then sold that at the shadow price, they would have a nice income. So the journalist from Ferghana, Ru tried to buy dollars from the official exchange offices. After several unsuccessful efforts, he found out that organized groups at the official exchange points let their people queue up and the police intervene when third parties try to approach the exchange point. Also among those waiting are people who make sure that no “strangers” get involved in this business. That means: Organized circles have access to the dollars at the cheap official rate and can then sell them to the citizens at the high shadow rate. The police officers and officials who protect this cycle should get their share. 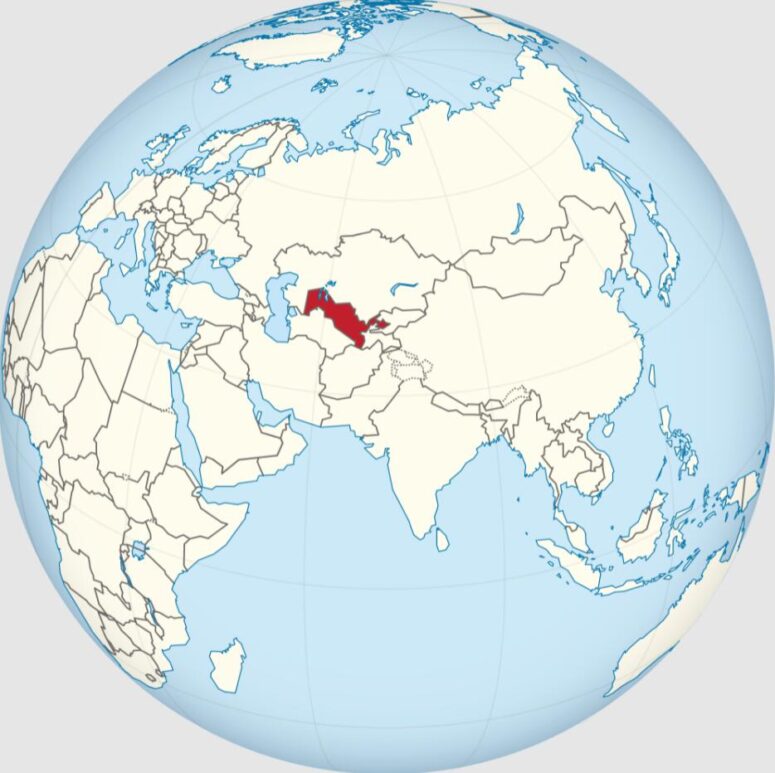