Various cartographic representations offer a first introduction to understanding each country. Here is an example. Comment on map 1 (“Cultural and Historical Areas”): Uzbekistan consists of five cultural and historical areas, the borders of which are roughly identical to the borders of the former premodern states (Khanates and Emirates). They are the Tashkent region, the Sirdarjo region and the Uzbek part of the Ferghana Valley (No. 1 and 2 – the Kokand Khanate), the Djisach regions, Samarkand, Bukhara and Nawoi (No. 3 – the emirate of Bukhara), the two southern areas of Kashkadarjo and Surchandarjo (No. 4 – the so-called East Buchara, which often nominally belonged to the Emirate of Bukhara) and the area of Khoresm and the autonomous republic of Karakalpakstan (No. 5 – the Khanate of Khiva). These cultural-historical areas shape local and regional identities in Uzbekistan to this day, due to which various solidarity networks can often arise in politics or the economy and accordingly determine the actions of the actors. To understand today’s problems and interests in the political / economic field, the distinction between cultural-historical areas and regional administrative units (see below “Administrative structure”) is important.

Capital: Tashkent since 1930, before that – Samarkand

Head of State: Shavkat Mirziyoyev (since September 8, 2016 as interim president, since December 4, 2016 as elected president)

The north-western part of the country is flat and occupies the center of the Turan Basin. It covers part of the Qysyl-Qum desert (German: Red Sand Desert) through which the Seravshan flows. This desert is 600 km long and 350 km wide and is bounded in the south by the Amu-Darja, which flows into the drainless, weakly salty Aral Sea in the northwest. The area is by a narrow strip of Meerza-Tschul Steppe connected (dt. Hunger Steppe) with the eastern part of the country the densely populated, fertile Fergana level at the upper Syr-Daria between foothills of Tienschan comprises. The capital Tashkentlies in an oasis on the western edge of the Tienschan foothills. The mountain and foothills are very prone to earthquakes. There is a distinct continental climate with high temperature fluctuations.

Uzbekistan has a diverse flora: there are more than 3,700 (according to other data approx. 4,800) plant species, 20 percent of which are native to Uzbekistan. Most of these plants are found in the mountains, only a few in the desert and steppe regions. The country’s wildlife is just as diverse.

According to a2zgov, Uzbekistan is rich in natural resources. Uzbekistan has rich reserves of gold, uranium, copper, silver, lead, zinc, tungsten, natural gas and some other mineral resources. The country currently mines natural resources worth around 5.5 billion annually. USD. The total potential of the mineral raw materials is estimated at more than 3.3 trillion USD.

Triggered by the intensive cotton cultivation and the associated excessive use of the Aral Sea tributaries with inefficient irrigation methods, the water level of the Aral Sea has dropped dramatically. Due to the large use of pesticides, insecticides and fertilizers, the soil and drinking water in the region around the Aral Sea are contaminated. On the island of “Ostrow Wosroschdenije” (“Rebirth”), biological weapons were tested on animals during the Soviet era. Due to the drying up of the Aral Sea, this island has become part of the mainland since 2018, and it is now at considerable risk go out. The population in the Aral region suffers in a particular way from the direct consequences of the environmental disasters. GIZ is trying to improve the situation by afforestation in the Aral Sea region. Now urges Uzbekistan an international expert and donor conference for the elimination of consequences of desiccation. Inadequate pollutant controls in traffic, contaminated sites, the energy sector and industry as well as inadequate waste disposal increase the burden on urban centers. Drinking water supply and sewage disposal are often inadequate. The environmental awareness is not sufficiently pronounced, especially in the government. It became an environment agency founded, but it has not been given any effective powers to implement specific environmental policy goals. The dying Aral Sea is now attracting more and more tourists from abroad. However, the Aral Sea is not the country’s only environmental problem. The increasing air pollution in the capital and across the country is also a challenge, which the government hardly addresses. Or the problem of air pollution is downplayed with numerous tricks when measuring values. 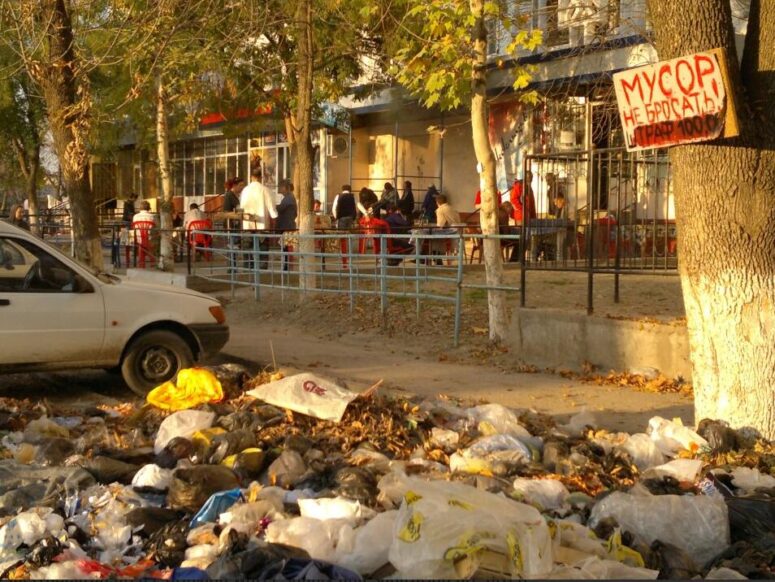