During the Soviet era, a number of new administrative centers emerged, as well as cities in mining districts, and later also industrial cities. In the 20th century, the larger cities were expanded and developed for modern transport. Modern multi-storey residential construction found its way into almost everywhere and contrasts with the traditional form of housing with low buildings shielded from the street but grouped around a garden. At the same time, monumental administrative buildings were built in all administrative centers.

In Tashkent, the earthquake of 1966 was used as an opportunity to demolish large parts of the low, heavily green old town development and replace it with multi-storey residential buildings. Since the 1970’s, the architectural heritage of the oriental cities has also been taken on and the more prominent secular and cult buildings of the historic old town areas of Samarkand, Bukhara and Khiva have been restored.

The big bazaars are now the main shopping centers of the big cities. New buildings were created in particular for banks, international hotel chains and the representation of independent states. The larger cities of Uzbekistan are experiencing a very high level of immigration from the countryside, despite the fact that the government is trying to curb poverty immigration into the cities through immigration regulations from the Soviet era (Propiska, Registratsiya). The urban infrastructure, which was criminally neglected after the collapse of the Soviet Union, now requires special repair and modernization measures on the part of the government. Because the numbers speak for themselves: a third of Uzbek cities have no access to the sewer system.

The reassessment of tourism (less cotton – more tourism), which began in the early Soviet period, and then the recognition of cultural heritage, favored extensive rehabilitation measures in Khiva, Bukhara and Samarkand. However, after independence the country resumed “restoration” of historic buildings also has a downside: Only a few buildings have been preserved in the original, because the government through the intense operated by it “restoration” of historical artifacts in fact originals destroyed and instead of kitsch, historicizing new buildings can create. The architectural legacy is being bulldozed. Shakhrisabs (hometown of Timur), Tashkent, Bukhara and Samarkand are particularly affected.

Unleashed capitalism makes things even more difficult: As numerous reports from Tashkent and the country’s provinces show, the oligarchic groups have discovered the city and old settlements as a new source of income for themselves: old districts are being completely torn down and their residents are forcibly driven out see video below) and new faceless architectural monsters are popped up.

According to areacodesexplorer, Uzbekistan has a complex transport system. The transport system includes the railway lines, the road network (public network with a fixed ceiling – 42,000 km, as of January 1, 2018), the air lines and the pipeline system. Local public transport is particularly well developed in the capital Tashkent.

Railway traffic: In 1994 the Uzbek Railways was founded. The railway had in 2014 accounted for 90% of total freight in the country. The total length of the railway line is approx. 4,642 km (ectrified: 1,658 km; January 1, 2018), as well as approx. 2,000 km of station and shunting tracks and 362.4 km of tracks in industrial facilities. Uzbekistan has recently started to rely on tourist offers on its rail networks.

Road traffic: Uzbekistan’s road network is one of the best developed in the CIS countries. According to the Uzbek Ministry of Transport, 91.9% of freight transport and 99% of passenger transport were carried out by road in 2016. The most important expressways are Tashkent-Termez, Tashkent-Bukhara-Nukus-Muynak, Tashkent-Angren-Kokand and the Ferghanaring, which connects the cities of the Ferghantal. In total there are more than 115,000 km in Uzbekistan. Road, 95.6% of which is paved.

Air transport: The best way to reach Uzbekistan for European travelers is by air. Many airlines connect the country with the capitals and major cities in Europe and Asia. The national airline Uzbekistan Airways has modern aircraft and also operates domestic flights. Tashkent, Samarkand, Termez and Urgench airports are international airports.

The pipeline network: The Uzbek gas pipeline system comprises nine main pipelines with a total length of 12,000 km. These are connected to the common pipeline system of the CIS countries and also deliver gas to Europe.

In 1993, the EU launched the TRACECA – Transport Corridor Europe-Caucasus-Asia project. It combines several individual projects that connect existing transport routes between Europe and Asia and expand the infrastructure. All EU member states, Azerbaijan, Georgia and Armenia, Ukraine, Moldova, Bulgaria, Romania and Turkey, as well as Kazakhstan, Kyrgyzstan, Uzbekistan, Turkmenistan and Tajikistan are involved in TRACECA.

Metro: The capital, Tashkent, is the first city in Central Asia to use the metro. It is worth taking a trip to this architecturally fascinating “underworld”.

“The New Silk Road (” Belt and Road Initiative “- BRI): As part of this initiative, Uzbekistan has the opportunity to modernize its inherited transport system from the Soviet Union with Chinese support and its importance for the international movement of goods with China upgrade. 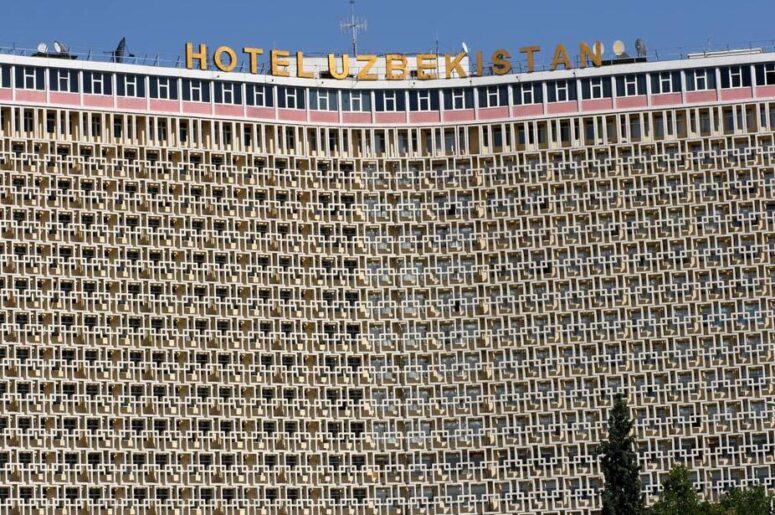