Yemen is located in the southwest of the Arabian Peninsula. Its neighboring countries are the Kingdom of Saudi Arabia in the north and the Sultanate of Oman in the east. In the south and west, Yemen borders on the Gulf of Aden and the Red Sea. Many islands still belong to Yemen.

Sana, the largest stand in the country, is both the capital and the cultural center. On the west coast is the Tihama, a semi-desert-like plain up to 70 kilometers wide, which quickly merges into the mountain region with the highest elevation, the Djebel an-Nabi Shu’alb with a height of 3,760 meters. Towards the east, the mountains gradually fall back to the ar-Rub ‘al-Khali desert. Deeply cut, partly fertile wadis are characteristic of the Arabian table country in the east.

The country in the southwest of the Arabian Peninsula fascinates every visitor with the contrasting landscape and architecture: gigantic mountains with villages that tower like defensive fortresses on the peaks, picturesque small settlements with houses made of clay, brick and stone, deserts and fertile valleys, great terraces and wonderful beaches.

In 2005, about 336,000 people came to Yemen as tourists. Due to the incidents and the tense political situation in Yemen, this number was reduced to a few thousand visitors a year.
However, if you would like to spend quiet days and vacations, you can enjoy a great vacation in Yemen at tourist locations. Because there is no mass tourism here. The old town of Sanaa or the historic capital Schibam with its wonderful buildings and historic houses are particularly beautiful.

Also worth seeing in Yemen is the Zabid medina and the historic and important city ​​of Tarim. The excavations at Baragish are also very interesting. There will probably be no expansion of tourism in Yemen in the next few years. The lack of infrastructure makes it very difficult to set up in this industry. The complicated security situation does not make Yemen the most popular travel destination.

Capital: Sana’a (1.9 million inhabitants, 2006). The most important economic and commercial city in Yemen is Aden.

Form of government: Yemen has been an Islamic presidential republic since 1991, the constitution dates from 2001. The parliament is made up of 301 members.

Language: The official language in Yemen is Arabic. English is spoken in some cities.

Local time: CET + 2 h.
There is no changeover between summer and winter time in Yemen.
The time difference to Central Europe is +2 h in winter and +1 h in summer

Here you can find an exact topographic map of Yemen.

Yemen can be divided into three regions: the slightly rising coastal plain is between 30 and 60 km wide, particularly in the southwest it is divided by protruding mountain foothills. Some of the remains of earlier volcanism can be found here, for example Aden is located in a volcanic double crater. The Tihama, the western coastal plain, is dominated by gravel and sand areas.

A steep and rugged outskirts connects to the interior. In the west the 3,000 m are exceeded several times. In the southwest of the Yemeni capital Sana’a is the highest point in the country, the 3,760 m high Jabal an-Nabi Shuʿaib.

The outskirts change into a 2,000 to 2,500 m high highland, crossed by wadis (dry valleys). The great Wadi Hadramaut stretches along the southern coast. Towards the northeast, the highlands slope down to the ar-Rubʿ al-chali sand desert in central Arabia. Agriculture is practiced in the wadis, mainly grain and cotton are grown.

This map of the population distribution in Yemen was created by the Worldmapper team. Densely populated areas appear bloated, the area of ​​sparsely populated areas is reduced. The shape of the grid has been preserved; an underlying map with the original geographical extent helps interpret the map. The distorted map should help to present abstract statistical information clearly. 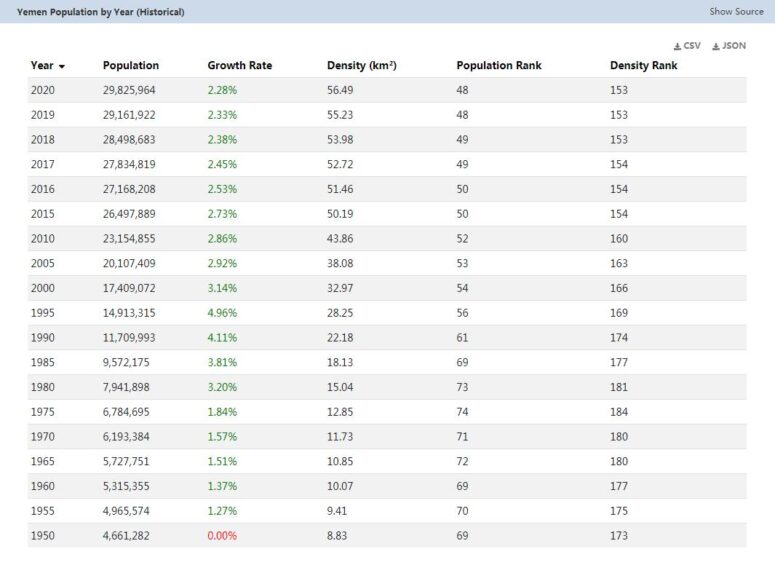 The Yemeni Islands and the coastal plain are very hot with very little rainfall. The rainfall on the coast reaches between 25 and 150 mm, which fall 5 to 15 days a year. In winter it is very warm at maximum temperatures of 28 to 31 °C and minimum temperatures of 19 to 23 ° C. In summer the air humidity is high, the maximum temperatures are between 34 and 38 ° C, at night the values ​​hardly drop below 26 ° C. Only rarely does light rain fall on the southeastern coast in summer due to the foothills of the Indian monsoon (but never on the western coast). From time to time heat periods with 40 °C and more occur. Morning fog can occur on the coasts (on the western coast in winter, and on the southeastern coast in summer), which does not last long due to the sun’s rays. The air humidity reaches 60 to 85%.

The climate is milder in the mountain region of Yemen. Winters are dry here with large temperature fluctuations (0 to -4 °C at night, 22 to 24 °C during the day). In summer it is moderately humid in the mountains, which makes agriculture possible. In some regions, precipitation (200 to 700 mm) occurs up to 50 days a year, especially between March and August. The maximum values ​​rise to 26 to 30 ° C, a little less on rainy days. At night, summer temperatures drop to 9 to 13 ° C. The air humidity is around 40% all year round.

In the highlands it is relatively dry all year round with 5 to 25 rainy days. The mild winters show large temperature fluctuations (during the day 23 to 28 ° C, at night 0 to 6 ° C), in the hot summers the maximum values ​​reach around 36 °C and fall to 10 to 16 °C at night. Temperatures of 45 °C are often reached in the transition region to the desert. Humidity is rather low all year round in the highlands at 25 to 45%.