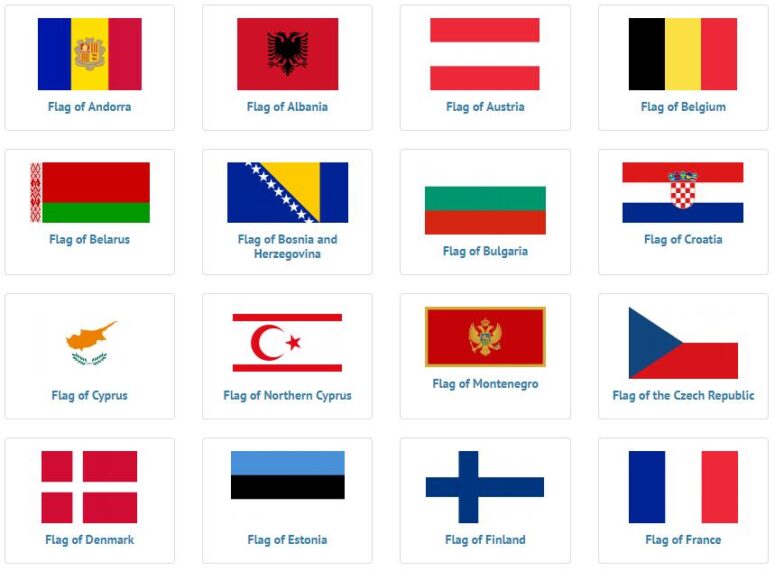 The flag according to its current appearance and intended solely as a trade flag at sea was sanctioned by a law of the Storting in 1821. The then Union countries Norway and Sweden had from 1814 a common war flag and national flag with a Union flag embedded in the upper inner flag field. Norway abolished this flag in 1898 and introduced the “pure Flag”. The flag was composed in its time by a narrower dark blue cross was inserted in the white flag of the Danish flag.

The flag was added during the freedom struggle against Spain and is considered to have occurred for the first time in 1579. The upper field was then orange, which is the color of the house of Oran. Change to red took place around 1650 because the flag was then seen more clearly at sea. According to the latest determination, the blue shade should be cobalt.

The flag was officially established in 1881 but was put into service as early as 1815. The colors have been the ruling dynasty of Grimaldis since the end of the 13th century and are also included in the coat of arms. The flag happens to be identical to Indonesia.

The flag was adopted in 1991. For colors and their location, it matches the Romanian flag, but with the blue field in a lighter shade. The yellow center field contains the state arms.

The flag was officially adopted in 1964. White-red was the colors worn by the Normans, who in 1090 conquered the island from the Arabs. The emblem in the upper inner corner is the British Georgian Cross, which in 1943 was awarded to the people of Malta for brave resistance in the Second World War. The trade flag has a red cloth with a white Maltese cross in the center, reminiscent of the fact that the Order of Johannite had its seat on the island from 1530 to 1798.

The flag was officially adopted by 1972 but has been in use since 1815. As a result of the country’s historical past, the flag is almost identical to the Netherlands; the differences are that the Luxembourg flag is partly more narrow and partly has a lighter blue hue. 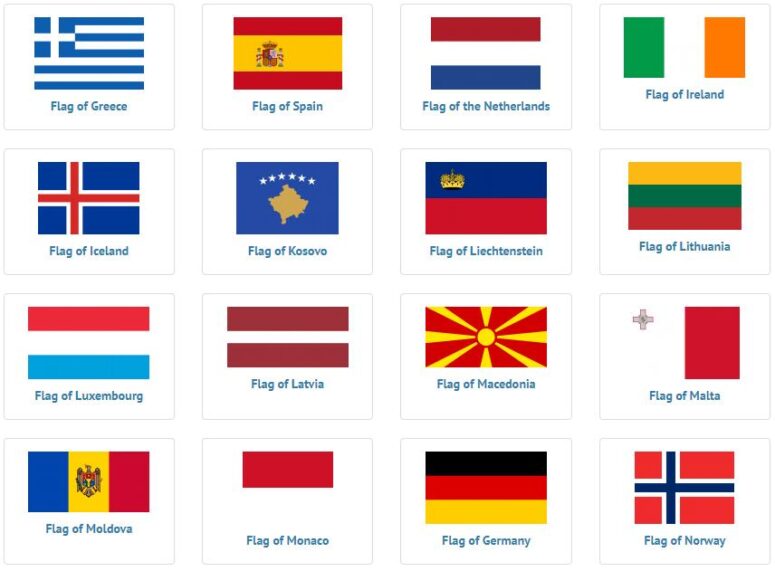 The flag was established in 1918. The colors yellow-green-red are characteristic of Lithuanian folk art and have been interpreted so that yellow stands for the corn fields, especially rye, green forests and red for the morning redness. The Grand Duchy of Lithuania had from the beginning of the 14th century, among other things, a flag with a white equestrian figure on the red bottom (current state coat of arms). During the Soviet occupation of 1940–91, the flag was banned.

The flag was officially adopted in 1921, but it had been in use since 1852. The color combination blue-red is of unknown origin. The prince’s crown in the blue field was inaugurated in 1937, mainly to create distinction against Haiti’s then flag.

The flag was officially established in 1922. Towards the end of the 19th century it began to appear secretly sporadically. The origin goes back to a flag of order, which from about 1280 was carried by the Knights of Cēsis. During the Soviet Union’s occupation of the country 1940-91, the flag was banned.

The flag was set when the country proclaimed its independence in December 1990. The color scheme is the same as Serbia and Montenergos but in order red-white-blue instead of blue-white-red. The white center field contains the coat of arms of the state arms: checkered pattern in red-white.

The flag was adopted in 2008 and has six white stars in an arch over a gold colored Kosovo map against a blue background. The stars symbolize Kosovo’s six major ethnic groups: Albanians, Serbs, Turks, Romans, Gorans and Bosnians.

The most recent design of the flag was established in 1946. The origin is the flag adopted in 1798 by the Cisalpine Republic with the tricolors of France as the role model. The green field is considered to symbolize freedom. The years 1848 (1861) –1946 were in the white field the royal house of the Savoy coat of arms.

The flag was officially established in 1915. Blue and white are traditionally Iceland’s colors. The narrower Red Cross, embedded in the white, indicates the country’s historical connection to Norway.

The flag was established in 1922 (officially, however, only in 1937). Its origins go back to 1830; role model was the French tricolor. The country’s religious divide is once again on the flag, where green signifies Catholics, Orange Protestants and white desire for consensus between them.

The flags. The state and national flag was set in 1832. Since the country’s newly elected king Otto I belonged to the Bavarian prince’s house Wittelsbach, it was allowed to include blue and white colors in the flag. The 1833 trade flag has nine stripes, alternating blue and white; they symbolize the motto “Freedom or Death”, which in Greek has nine syllables.

According to COUNTRYAAH.COM that lists all countries in the Europe, the flag was introduced at the French Revolution in 1789 and became official in 1794. The color scheme is considered inspired by the city of Paris coat of arms (blue and red) and the house Bourbon’s life color (white). The dimensions and color shades of the flag were last determined in 1958. When used at sea, the color fields appear to be of different width for optical reasons; the red field is the largest. France’s “tricolor”, as a historical symbol of freedom, has become the model for many other national flags.

The flag was officially established in 1918. The color combination is based on a proposal that was presented by Zacharias Topelius in the mid-19th century. White symbolizes Finland’s winter, blue “the land of a thousand lakes”. The cross expresses fellowship with the other Nordic countries. The Åland landscape uses its own flag.

The flag was added in 1881, when Estonian students at the University of Tartu (Dorpat) adopted it as an association flag. In the color symbolism, blue stands for the color of the sky and the people’s future faith, black for the darkness of the past and the fertile soil of the country, and white for a pure heart and hope for brighter times. The use of the flag was widened, and towards the end of the 19th century it was regarded as the national symbol of Estonia. The flag was officially established in 1918, when the country became free. It was banned by the Soviet Union after the occupation in 1940. Nevertheless, it began to be re-used in 1988, and the Estonian Supreme Soviet in 1990 accepted that it may, in some official contexts, be next to the Soviet flag for the sub-republic. Following Estonia’s complete liberation in 1991, the blue-black-white flag is officially established.

The flag began to be used in 1931 and was officially established in 1948. The composition is basically the colors of the Danish flag reversed. The color scheme is also inspired by Iceland’s flag.

The flag is considered to have been created in the 13th century (see Dannebrogen). It was constitutionally established in 1748. The arms of the cross are considerably narrower than on the flags of the other Nordic countries. Another difference is that the state and war flag is not three-tongued but two-tongued. The royal flag, like corresponding to the Swedish flag, the national arms embedded in a white, square field in the middle of the cross.

When Bulgaria became independent in 1878 and then adopted a flag, the color scheme diverged from the traditional red-white-blue tricolors of the other Slavic peoples in that the blue field turned green.

The flag was established in a completely new version in 1998 after having previously had the state arms on the canvas. Its current three-division is considered to mean Bosniaks, Serbs and Croats. The stars symbolize the country’s membership in the Council of Europe.

The flag was set in 1831. Black and yellow are the heraldic colors for the core province of Brabant as well as for Flanders. Red and yellow are among other things the colors of Wallonia. Originally (1830) the colors were arranged horizontally, but they changed according to French pattern already the following year.

The flag was initially horizontally divided into yellow and red, the heraldic colors of the Countess of Foix, who was the country’s then proprietor. It was changed in 1866 to vertically divided tricolors, whereby blue was added, and then became a combination of the colors of Spain and France. The yellow center field contains the state arms. 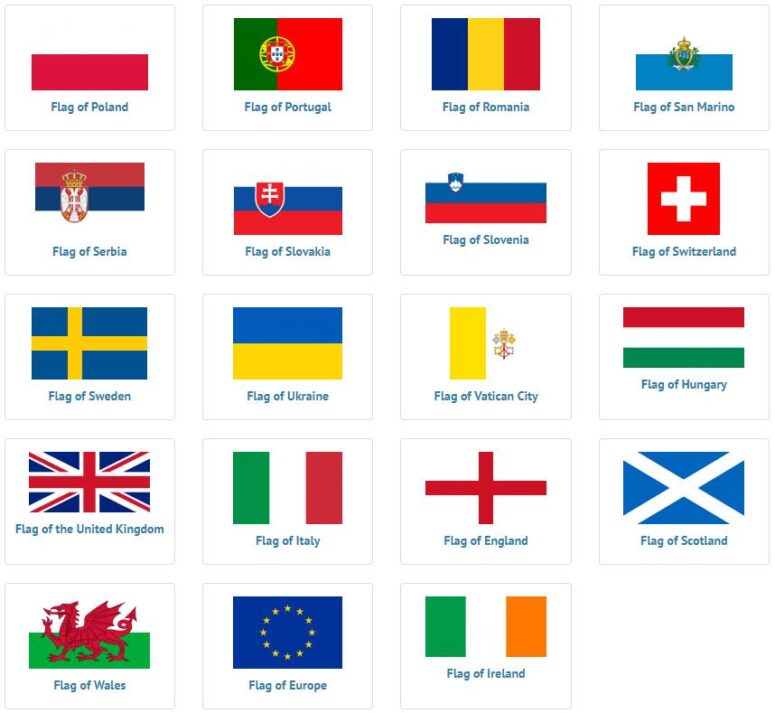