With an area of ​​17.1 million km², the Russian Federation is the largest country in the world. Its east-west extension is 9000 km, its north-south extension about 4000 km. The country was the heartland of the Soviet Union until 1991. Russia lies on the continents of Europe and Asia. From west to east, the country can be divided into six large areas: the Eastern European lowlands, the Urals, which separate Europe and Asia, the Western Siberian lowlands, the Central Siberian highlands, the Eastern Siberian highlands and the high mountains in the south.

The hallmark of the climate in Russia is continentality. The temperature differences between summer and winter are very large. Climate, vegetation and soil zones are arranged approximately parallel to the circles of latitude. Most of the country has a temperate climate. The tundra in the north and the taiga adjoining it to the south are the typical vegetation zones of Russia. The Siberian taiga is the largest forest area on earth. The southern forest steppes can be used intensively for agriculture.

Short for RU on ABBREVIATIONFINDER.ORG, Russia is a multi-ethnic state. Most of the people live in the European part of the country. The majority of the faithful belong to the Russian Orthodox Church. After the collapse of the USSR (Union of Soviet Socialist Republics) in 1991, there were profound political and economic changes in Russia. The great wealth of mineral resources, especially iron ore, hard coal and oil deposits, promoted the development of Russia to an industrial country. 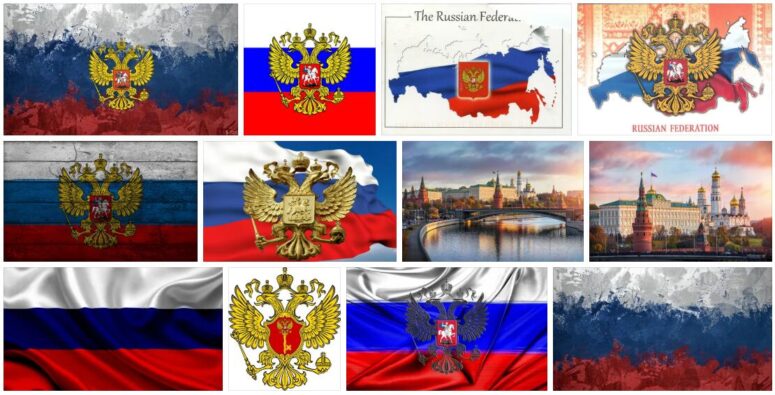 The Russian Federation is almost twice the size of China or 48 times the size of Germany. Russia occupies 11% of the earth’s land mass (Fig. 1).

The capital is Moscow.

From west to east, the country can be divided into six major landscapes. The Eastern European lowlands extend from the western border to the Ural Mountains and the Caucasus. The Volga flows through it. Lower ridges dominate.

The Ural Mountains only have high mountain character in the south. It is considered the border between Europe and Asia. The West Siberian lowlands occupy the area from the Urals to the Yenisei River. It is a flat, low plain through which the Ob, Irtysh and Yenisei rivers flow.

To the east joins the Central Siberian mountainous region, which is characterized by highly fragmented plateaus between 400 and 1000 m high.

The East Siberian mountainous country consists of high mountains. There are about 120 volcanoes on the Kamchatka Peninsula in the Pacific Ocean, 28 of which are active.

In the south, high mountains close off Russia. The highest mountain is in the Caucasus Mountains in the south-west of the country. It is the Elbrus with a height of 5642 m.

Due to the large north-south extension over almost 40 degrees of latitude, Russia has a share of different climatic zones. Continentality is common to all climatic zones. The temperature differences between summer and winter are very large due to the distance from the sea and the country’s openness to the north. Extensive high pressure areas ensure arctic cold in winter and plenty of sunshine and a corresponding rise in temperature in summer. The extreme climatic conditions, especially the winter cold, limit the traffic development of large parts of Russia (Fig. 2).

As a result of the long winter with little snow, almost half of the country has permafrost.In the north and east the ground is frozen to a depth of several hundred meters. The surface water cannot seep away, swamping occurs. In the interior of the country, where there are no large mountains, the climate, vegetation and soil zones are almost parallel to the circles of latitude (Fig. 3). The zones range from the arctic climate in northern Siberia to the subtropical climate on the Black Sea coast. 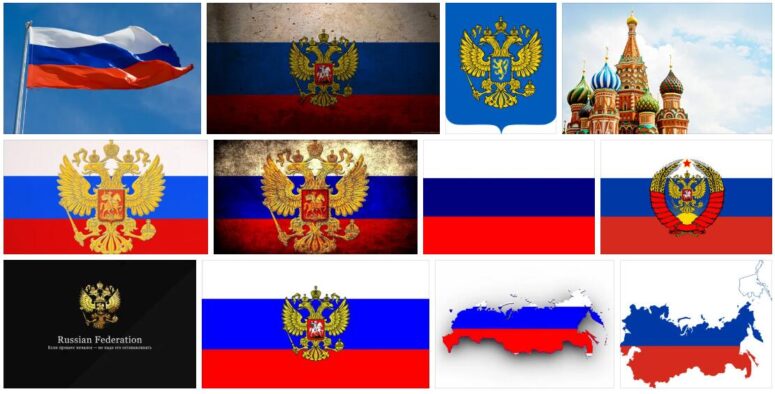 The tundra stretches south of the Arctic Ocean. There are almost no trees, lichen, moss and low shrubs dominate. The taiga connects to the south. It is a boreal coniferous forest zone with larches, pines, spruces and birches. It is interspersed with swamps and houses about a fifth of the world’s total wood reserves. It is the largest forest area on earth.

The mixed deciduous forest is limited to a narrow zone in the Eastern European lowlands.

The fertile soils of the forest steppes and steppes, including a wide belt of black earth in southern Russia; have been remodeled most through agricultural use. Only remnants of the former grassland have been preserved in their original state.

The Volga and Don are the main rivers in the European part of Russia. Lena and Yenisei are the largest rivers in Siberia. Further to the west, the Ob and Irtysh form the longest river system in Asia with a total of 5410 km². The largest lake in Europe is Lake Ladoga with a surface area of ​​18135 km² northeast of St. Petersburg. It is 33 times the size of Lake Constance. Huge inland waters like the Caspian Sea and Lake Baikal lie in the eastern part of Russia.

Russia ranks sixth in the world in terms of population. The population distribution is very different. Most of the population lives in the European areas and the transition zone of the Urals. Of Russia’s 13 cities with over a million residents, only two are in the Asian part (Novosibirsk and Omsk). Moscow and St. Petersburg, by far the largest cities, are located in the western lowlands.

Russia is a multi-ethnic state. The Russians make up 80% of the population, but there are more than 100 recognized national minorities in the country. Ethnic diversity harbors many conflicts. Many of the peoples living on the periphery of the country are striving for independence or are looking to join the neighboring countries.

The majority of the religiously bound population belongs to the Russian Orthodox Church. The Muslims are the second largest religious group. They also include the Turkic peoples in the North Caucasus and the Volga region.

After the end of the USSR (Union of Soviet Socialist Republics) in July 1991, Russia saw profound political and economic reforms. However, the economic situation has deteriorated further. The range of goods has been improved through the gradual privatization of the companies, but the stabilization of prices has not succeeded. There is high inflation in the country. The standard of living of the population fell below the level of the times of the USSR.

Unemployment and poverty are the consequences. Only a small group of business people achieved wealth and success. A Russian mafia infiltrates parts of the economy. However, the natural wealth of the country offers the best conditions for a gradual positive trend reversal in the country.

Only 12% of Russia’s land area can be used for agriculture. Only in the central and southern areas of European Russia is the natural environment cheap enough. In the rest of the country, agricultural use is restricted by climatic conditions. The cultivation area in central Russia is therefore limited to a triangle that protrudes into western Siberia in a wedge shape. It is bordered by winter cold in the north and by summer drought in the south (Fig. 6).

The independent peasantry in the USSR had been eliminated through collectivization. Since 1992, land can be cultivated individually again. As before, cooperatives, kolkhozes and state farms predominate. Since there is a lack of capital, however, the large farms generate low yields per hectare. Harvest losses are great due to inadequate storage. Since 1990 production has decreased by 30%. The most important crops are cereals and potatoes. Nevertheless, around half of the grain requirement has to be imported. The cultivation of the fields and the use of grassland is still partly done with the simplest means. Animal husbandry is of great importance.

Russia is extraordinarily rich in natural resources, especially in Siberia. It has the richest iron ore – and coal deposits in the world. It has 34% of the global natural gas and 17% of the oil reserves. It is rich in non-ferrous and precious metals.

The spatial distances in the country are the greatest problem of effective use. The places of extraction, processing and consumption must be linked to one another at high cost. Transport by ship is only possible to a limited extent because the rivers ice up for up to nine months. Land traffic is hindered by permafrost and the weather. The Trans-Siberian Railway is insufficient for economic needs.

Due to Russia’s political and economic problems, industrial production fell by around 50% between 1990 and 2000. Many plants are out of date and the goods no longer meet the quality standards. State enterprises can no longer operate profitably. A general privatization has not yet taken place because there is a lack of capital, technology and market economy experience. Despite the current negative situation, Russia is an important industrial country. 35% of the employees work in industry. Raw materials production and aerospace are powerful sectors. The smelting industry is one of the most important branches of industry. Ores and coal are mined in the Kursk, Ural Mountains and Siberia regions. The metal processing industry is located in this area, but is also located in Moscow and St. Petersburg. Chemical industry is concentrated along the Trans-Siberian Railway and the Volga. Textiles or food are produced in the European part of Russia. Natural gas, hard coal and oil make up 41% of exports. The main trading partners are the countries of the CIS (Commonwealth of Independent States), Germany and the USA.

Centuries of state development with conquests, mergers and losses have shaped the borders of today’s Russia.

In the 9th century, Slavic and Norman principalities formed the first Old Russian Empire around the center of Kiev. The empire was destroyed in the 13th century by invading Mongols and Tatars. Mongol rule lasted 200 years.

In the middle of the 16th century, IWAN IV., The Terrible, was crowned first tsar. The empire was expanded under the tsars. Through cruel conquests and a brutal submission of the tribes living there, Siberia was added to the empire. Siberia was the land of prisoners and exiles. Tens of thousands were forced to work in chains. In 1917 the communists overthrew the tsar and in 1922 founded the USSR. At its head came the dictator STALIN in 1928, who had labor camps built in Siberia for prisoners and prisoners of war and who resettled and oppressed entire peoples.

The communist party’s absolute rule lasted 75 years. The press and television were controlled, people were spied on and arbitrary judicial acts terrified them. Religious freedom was restricted.

On December 21, 1991, the Union of Soviet Socialist Republics disintegrated. It was replaced by a loose association of states, the Commonwealth of Independent States (CIS). With the exception of the Baltic states of Estonia, Latvia and Lithuania, all twelve former Soviet republics belong to it. Russia is the largest state in the CIS.