Typical of much of Indian art is a lavish array of forms. Still, there is a quest for order and system in every Indian cultural expression. The jumble that overwhelms one in the beginning, for example in a relief frieze, can, upon closer study, arrange for a geometric pattern which, although often complex but really very strictly designed.

Diversity turns out to earn a higher unity, which is the real content of the artwork. This content is an experience of the viewer of the artwork. In a few people with high sensitivity, this condition is close to a religious experience. To characterize it, the Indian theorists resort to such a strong word as bliss ( Sanskrit: ananda). Especially interesting from a psychological point of view is that it is spoken of as an experience of “wonderment”, which in turn is said to be an extension of the soul (chittavistara).

Namely, Indian art aims at generalization, the production of the universal, and the ultimate goal is to evoke a mental state in which all contradictions are abolished and everything is a unity. The lack of individualizing characteristic that is so often found in Indian painting and sculpture has its origin in this.

Yet the Indians lacked the ability to create portraits, nor did they have any general dislike for it. There are also a fairly large number of preserved statues with quite realistic features. Literary sources state that there were art galleries, especially in the princes’ palaces, where images of the ancestors were kept.

The mental state that the works of art (poetry, dance, music, acting, painting, sculpture and to some extent architecture) can evoke, is denoted by rasa, a Sanskrit word which otherwise means ‘taste’. Some theorists believe that the artistic experience is one; Simply put, it can be said that rasa is an amplified, pure emotion that completely fills the personality, while it excludes all other emotions and thoughts.

The Indian artist does not share the ancient Greeks’ love of muscles, tendons and joints. A body should be portrayed meaty, but not tendonous or muscular. The statue of Buddha ashes is a rare violation of this ideal. The positions that the human body occupies in a statue (or dance) are strictly regulated. One assumes a vertical line called brahmasutra. A figure seen from the front, and which this line divides into two equal parts, is, according to the theory of art, apt to awaken emotion peace. Other and more intricate poses gain their symbolic value through fixed conventions.

Within an ancient, great culture like the Indian, it is no use trying to return all art expressions to one single formula. Of course, the theories we have explained here have not been valid for all art and for all eras. It is also important to be aware that the theories are created by an intellectual elite based on the higher castes, while the artists (except the poets) come from lower social groups. The aesthetic theories are nevertheless a good help for anyone who wants to learn to appreciate Indian art.

The visual arts came to belong to the lower classes of society, and it was the Buddhists who dominated the art for a long time. It is reasonable to assume that the large mass of Buddhists came from lower social groups, while having close links with powerful, economically strong groups. The class-leveling tendency in Buddhism may have brought to light groups of art tradition earlier than what conditions were where Brahmans had much to say, and where caste boundaries were difficult to enforce. 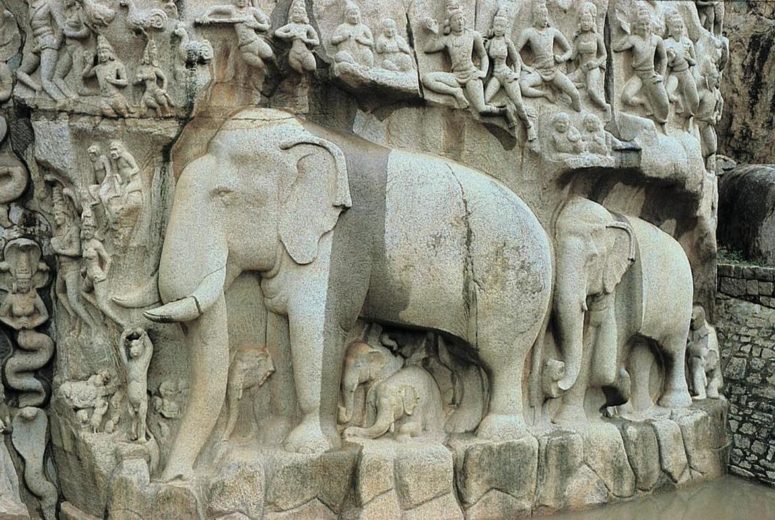 Rock paintings with animal motifs from around 8000–5000 BCE. can be found in the Vindhya Range. Under the Indus culture (around 2500 – 1700 BCE) we find the first known sculptures.

With Emperor Ashoka, in the 200s BCE. created an elegant representational art, primarily sculpture related to architecture in connection with religious cult sites. Of the sculpture preserved from the centuries around the birth of Christ must be mentioned the decoration of the balustrade of the stupa in Bharhut, with narrative scenes and ornaments in low relief. The gates of the so-called Great Stupa in Sanchi, Madhya Pradesh from around 200 BCE, are richly decorated with sculptures and narrative scenes from Buddha’s life, carved in right relief.

In the first century possibly two art schools dominated, Mathura and Gandhara. The former represents a domestic development, while Gandhara (in present-day Pakistan ) represents Buddhism in Roman-Hellenistic form. The Buddha is depicted as human, and is depicted standing or sitting with crossed legs.

The so-called classical period between 300-500 is called the Gupta period. From now on, Hinduism took the lead. The sensual and dynamic Hindu deities contrast with the simple Buddha form. 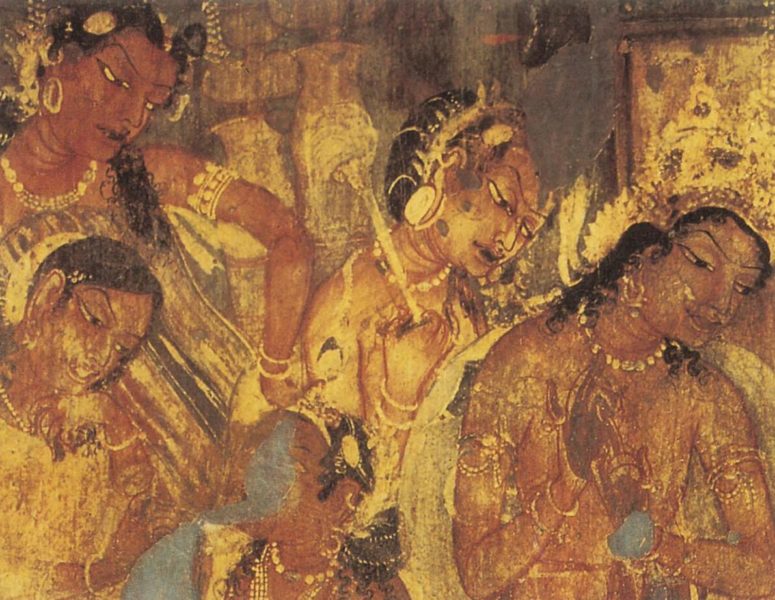 From the Late Classical period (550–800), there are outstanding remains of Buddhist murals in Ajanta, Maharashtra and Sigiriya in Sri Lanka. In the Shiva temple on the island of Elephanta near Mumbai, there is a monumental sculpture, the three-headed Shiva Trimurti, which symbolizes the three aspects (the 700th century) of the god, which destroys, which creates and protects. Other famous masterpieces in sculpture were created in Mahabalipuram, Ellora and Elephanta in the 700-800s, the sculptures in Bhuvaneshvar and Konarak in Orissa a few centuries later. The latter, somehow The Ramachandra Temple in Khajuraho has highly debated erotic sculptures. Also known are the so-called Chola bronze sculptures made in southern India from about the year 1000.

As Muslim conquerors from around the 9th century laid down India, they also took over the hegemony in the arts. In the beginning, all Islamic art was a foreign element, but their art was influenced by the Indian environment. The image hostility of the Islamic conquerors systematically destroyed a number of sculptures. However, remains of paintings in harems and baths show that the Muslims had frescoes, although such images were condemned by Orthodox Muslims. The development of the miniature painting in the book arts was positive for the Indo-Islamic cultural contact. 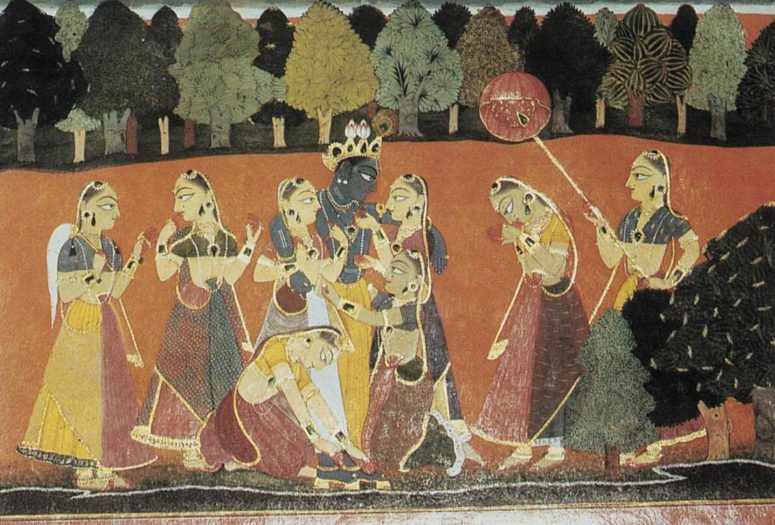 As the British East India Company won, Indian artists were commissioned to portray people and nature. These company paintings have their role models in the muggal era’s miniatures. In the Victorian era, an attempt was made to revive the Indian sculpture tradition, but it was not until the 20th century that the work yielded results. The Bengal School, led by Rabindranath Tagore, sought inspiration in Ajanta’s frescoes and the Chola bronzes. Abanindranath Tagore and Nandalal Bose rejected the European oil painting and made watercolors. Rabindranath Tagore made pen drawings.

Amrita Sher-Gil (1913–1941) initiated a more robust style, which in the 1930s sought to unite eastern and western impulses in a more summary rigorous form. She was born of Sikh-Hungarian parents in Budapest and educated in Europe. The Indian villages became an important source of inspiration and her images were increasingly influenced by Pahari miniatures.

Several artists drew inspiration from the folk tradition in different parts of the country. Jamini Roy (1887-1972) came to his distinctive style by imitating and simplifying folk art traditions in Bengal. Even more pronounced in form and color was George Keyt (1901–1993 Sri Lanka). Influenced by Henri Matisse and Sigiriya art, he created a style that in his line can be reminiscent of Pablo Picasso. A more cautious impressionism characterized Narayan Shridhar Bendre (1910–1992) and Kanwal Krishna (1910–1993), while Amina Ahmad and MF Husain (1915–2011) painted abstract pictures. A number of women made their mark on Indian exhibitions. Kamla Das Gupta (1907–2000), Saroj Pal Gogi (born 1945), Leela Mukherjee (1949–2015) and Mrinalini Mukherjea (1949–2015) made sculptures and paintings, but also experimented with new material and new techniques.

A more abstract and individualistic trend is seen by several Indian artists active in the West, among others Krishna Reddy (1925–2018) in New York, Prafulla Mohanti (born 1936) in London and SH Raza (1922–2016) in Paris. From the former Portuguese Goa came the UN Souza (1924–2002), who worked figuratively. 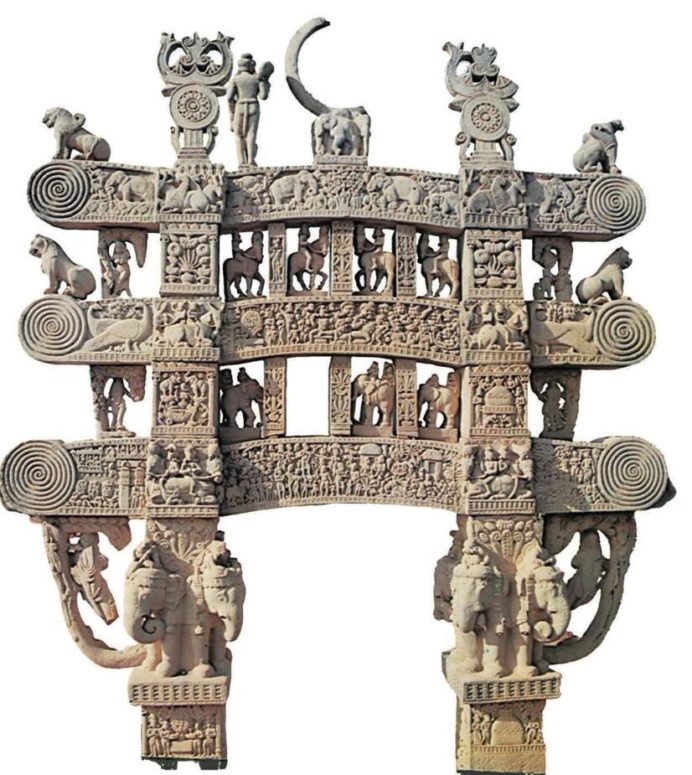 One of the gateways to the Great Stupa in Sanchi, Mahya Pradesh. The stupa was erected approx. 100 years BCE Legendary episodes (jakatas) from Buddha’s past life are carved into stone.

It was ancient tradition in India to illustrate manuscripts. Both Buddhists and Hindus had practiced it from ancient times, and the Jaina followers, especially in Gujarat, had developed a style that came to play a role for Muslim styles as well.

But first and foremost, the book painting is influenced by Persian models, especially the Mughal painting, which grew at Akbar’s court. His predecessor Humayun, in his exile in Persia, had met artists who accompanied him back to India. Akbar created workshops where painters illustrated famous classics.

Best known are Hamza-nama, images from Muhammad ‘s uncle’s life, in such a large format that they must have been used by storytellers to display. Particularly British museums own works of this time, such as Sa’di’s Gulistan and Babur-nama ( British Museum), Anvar-i Suhaili (School of Oriental Studies), Tuti-nama (Chester Beatty Library) and Akbar-nama ( Victoria and Albert Museum ). Razm-nama, illustrations of the Mahabharata, is owned by the Maharaja of Jaipur. 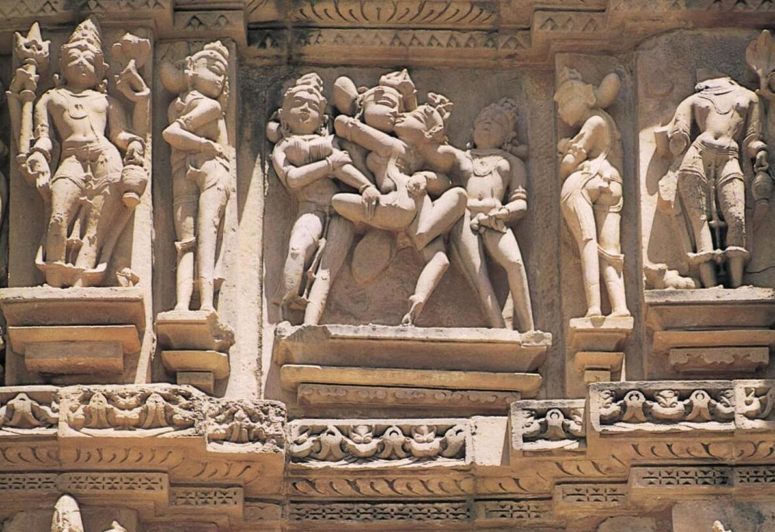 While the landscape retains its Sino-Persian design, and the flower arabesques in all its detail reveal Iranian origins, the Mughal painters use stronger and more colors in an often highly realistic image composition. This is most evident in all animal pictures and portraits. Knowledge of European images, which, thanks to Portuguese missionaries, ended up at Akbar’s court, also led the painters to study perspective and incorporate it into their images.

Today, there is a great deal of interest in the local styles as these evolved among both Muslim and Hindu princes who linked the influence of the Mughal painting in Delhi with local traditions. This process can be studied in Rajput painting from Rajasthan with Hindu motifs in bold colors. Mewar in particular is an interesting example. Something similar applies to the Pahari art from the Panjab Hills.

Thumbnails from Basohli, Chamba, Garhwal, Kangra and Kulu have long been sought after by collectors, and later names such as Guler, Mandi, Mankot, Nurpur and Sirmur have also emerged. The schools at Deccan, such as Bijapur and Golconda, are especially known for their refined portraits.