In 1858, India transitioned from the company to the British crown and became a colony ruled by a viceroy. Access to office was promised after “education, skill and impermanence, regardless of race and religion”, but in practice the Indians very rarely achieved higher office. As more and more Indians received higher education in the United Kingdom, the demand for participation in the administration became more and more prevalent.

It was these intellectual circles that in 1885 initiated the formation of the National Congress. It initially guaranteed its loyalty to the British and discussed internal political and social issues. From the 1890s, a politically radical nationalist direction led by Bal Gangadhar Tilak gained great influence, and in 1907 the Congress Party for the first time made the demand for swaraj (self-government).

Developments during the First World War gave the autonomy movement new wind in the sails. India had put more than one million men under arms and contributed greatly to the victory; the British colonial army consisted largely of Indian soldiers. The emerging industry in India demanded customs protection, and the new industrial proletariat began to organize. The Congress Party demanded greater autonomy, and from 1916 was supported by the League of Muslims, which was founded in 1906 as a counterbalance to the predominantly Hindu Congress Party. A constitutional reform in 1919 gave the Indians very limited self-government, but riots in Punjab earlier this year and the shooting down of several hundred Indians at a demonstration meeting in Amritsar created a bitter mood.

The Congress party led by Mohanda’s Karamchand Gandhi, best known as Mahatma Gandhi, boycotted the elections and proclaimed passive resistance, satyagraha, against the British. Now, for the first time, Indians of all classes joined the struggle for self-government. When violence was committed by the crowd, Gandhi quit the fight, but was himself arrested. He opened a new “disobedience campaign” in 1930, which almost led to open rebellion. In the 1930s, several roundtable conferences were held in London, in which British and Indians in vain tried to agree on further reforms. Gandhi and thousands of his followers were again arrested.

In 1935, the London Parliament passed a new constitution for India which provided significantly expanded autonomy. The Constitution came into force only in some provinces, and in the 1937 elections, the Congress Party gained a majority and formed government in eight of eleven provinces.

At the outbreak of the Second World War in 1939, India came along automatically, without the Indians being included. The Congress Party then withdrew its members from all cooperation with the government. A disobedience campaign started as the Japanese approached India’s borders. There were serious riots and a large number of Indian nationalists, including Gandhi and Jawaharlal Nehru, were jailed. Some Indian nationalists, led by Subhas Chandra Bose, collaborated with the Japanese and created a “government” in Singapore. On the other hand, over two million Indian soldiers enlisted by the British participated in the World War.

The division of India

After World War II, political life in India was dominated by the independence struggle and the split between Hindus and Muslims. The Muslims, who made up about a quarter of the population, were afraid of being overrun by the Hindu majority in an independent, unified India. The Muslim League, under its leader Muhammad Ali Jinnah, demanded the separation of a separate state, Pakistan, which would include all provinces where the Muslims had a majority. The Sikhs in Punjab, for their part, feared an Islamic rule there, and the princes watched with unrest for an independent, democratic India. The British tried, with Lord Archibald Wavell as viceroy, to mediate between Hindus and Muslims.

In February 1947 Lord Louis Mountbatten was appointed viceroy to withdraw from the British by June 1948. To avoid civil war he decided to cut the knot over. He informed the British parliament and both parties in India that two ” dominions ” were immediately established : India, or the Indian Union, with a Hindu majority, and Pakistan, with a majority of Muslims. Mountbatten was appointed Governor General of the Indian Union and Jinnah in Pakistan.

On August 14 and 15, 1947, sovereignty was transferred to the authorities of the new states. Jawaharlal Nehru became India’s first independent prime minister. But the split initially led to terrible massacres. Many hundreds of thousands were killed, and close to twelve million refugees searched the borders; Hindus from Pakistan and Muslims from India. The provision and assimilation of these refugee masses was a heavy burden for both countries. However, over 40 million Muslims preferred to stay in India after the split. The settlement between India and Pakistan also presented many other difficulties. India got about 90 per cent of all the factories, but the largest agricultural areas fell to Pakistan. Sharpest was the controversy over Kashmir. 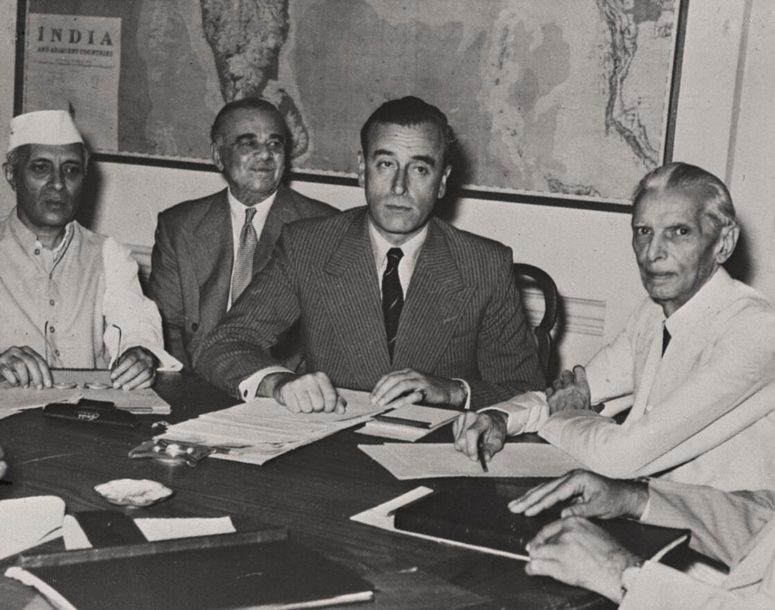 The British Vice King of India, Lord Mountbatten, informs in July 1947 Jawaharlal Nehru (left), as representative of India, and Muhammad Ali Jinnah (right), president of the All-India Muslim League and spokesman for an independent Islamic State, the later Pakistan, on the British Sharing Plan for India. In the background Lord Mountbatten’s counselor.

Gandhi was assassinated by a Hindu fanatic on January 30, 1948. In November 1949, the Constitutional Assembly decided that India should no longer be a dominion, but an independent republic within the British Commonwealth. In January 1950, Rajendra Prasad was declared the first President of the Republic. The authorities advocated extensive political, social and economic reforms.

The 500-600 princely states were integrated into the Indian Union, and the princes lost their personal power and most privileges. The caste was essentially abolished on paper, but in practice the 70-80 million “untouchable” continued to do work that no one else would do. To a certain extent, the woman’s position was improved, and a modern marriage law was introduced. Free education for all children aged 6 to 14 years was allowed in the constitution, but in practice this was not possible. Extensive reforms were adopted with a view to providing landless farmers with land.

The Nehru government advocated a centralized planning economy of an almost socialist model; it met resistance both from reactionary Hinduism and from communist-dominated movements. The development took place on the basis of five-year plans, partly financed by loans and gifts from abroad, primarily the Soviet Union, the United States and the United Kingdom.

In a short time there were major changes in the ancient Indian community. Implementation of the second five-year plan (1956–1961) was made difficult, partly due to unrest in several regions and increased tension in relation to China. In 1962, there were battles in several places along the border, and Chinese soldiers moved several places into Indian territory. China claimed large territories, but India rejected the claims.

Despite opposition, in 1962 the government adopted a family planning program aimed at curbing the strong growth in the population. The goal was to reduce the birth rate from 40 per 1,000 to 25 per 1000. In 1965, 13,000 family planning centers were established. Nevertheless, the increase in population continued to be a major problem. Between 1947 and 1997, the population increased from an estimated 350 to 950 million. The average life expectancy increased during the same period from 32 to 56 years.

In 1965, Hindi was made the official language of India, but strong opposition to the decision led to the recognition of English as a common language with “associated status”.

On Nehru’s death in 1964, Lal Bahadur Shastri became prime minister. Attempts to improve relations with China and Pakistan did not go ahead. In 1965, there were widespread acts of war in the Rann of Kutch and Kashmir. In 1967, there was less clash with Chinese forces at the border of Sikkim. 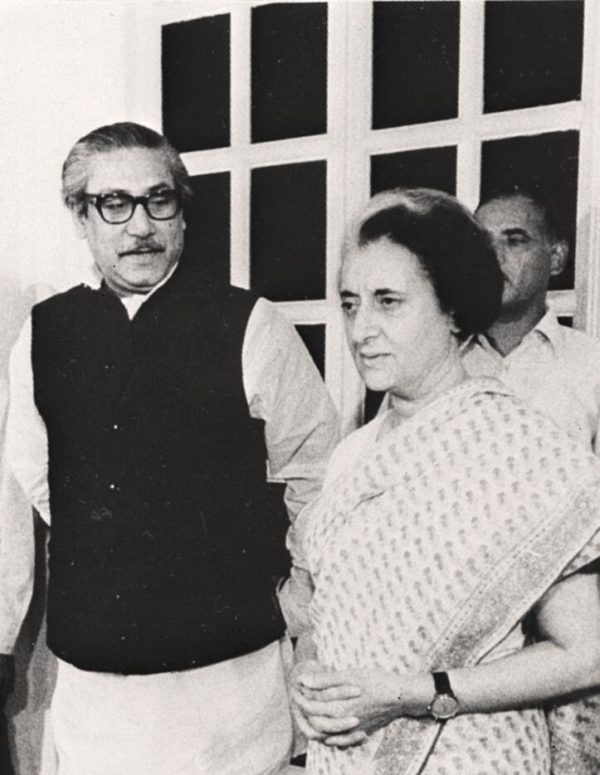 Indhira Gandhi, Nehru’s daughter, was India’s leader for most of the period from 1966 until his death in 1984. Here is seen Indhira Gandhi and Sheikh Mujibur Rahman, who became president of the newly created state of Bangladesh after Indian troops had defeated Pakistani forces in the former Pakistani East Bengal.

On Shastri’s death in 1966, Nehru’s daughter, Indira Gandhi, became prime minister as a compromise candidate between the right and left parties of the Congress party. In 1969, the Congress party was blown up and the right wing under Morarji Desai stepped out. The split was a dramatic expression of the turmoil that emerged in both Delhi and many states in the late 1960s. The reasons were many: economic setbacks so that the goals of the five-year plan were not achieved, disagreement on agricultural policy, dissatisfaction with the central government’s dominant position and so on. In several states, guerrilla movements arose. Here, Marxist-Leninist groups (Naxalites) played a prominent role.

In 1971, Indira Gandhi won a solid election victory under the slogan “Abolish poverty”. With good support from the voters, she advocated a hard line towards Pakistan. During the independence struggle in Bangladesh (East Pakistan), about ten million refugees came to India in 1971. Indian forces moved across the eastern border on December 4; war along the border with western Pakistan also broke out. After twelve days of fighting, they surrendered about 90,000 Pakistani soldiers in the east.

The military victory strengthened Indira Gandhi’s prestige, but strong social and political upheavals continued throughout the 1970s. Her moderate socialist reform program met with discouragement. Industrialization accelerated in the 1970s; India became a leader in the Third World when it came to utilizing nuclear power. An underground nuclear test explosion took place in May 1974. The biggest advances were in agriculture. The “green revolution” modernized rice and wheat production, and in the 1970s, India for the first time became self-sufficient with food.

In June 1975, Indira Gandhi was found guilty of violating the electoral law during the 1971 election campaign and was deprived of his seat in parliament. Before the appeal had been processed by the Supreme Court, she declared the state of emergency. Furthermore, she used her two-thirds majority in parliament for constitutional amendments that gave her almost dictatorial powers. The press was severely censored and over 100,000 political opponents were held in custody during the 19-month state of emergency, which Gandhi himself called “disciplined democracy”.

In January 1977 she wrote new elections, which became a turning point. The Congress party lost big, especially in the north. Six opposition parties that had joined forces in a joint party, Janata, secured half of the seats. In March 1977, Janata formed government with 82-year-old Morarji Desai as prime minister. The government advocated an economic policy with an emphasis on village development and small industry. In July 1979, the Janata government disbanded after strong internal strife between factions and leaders. There were also disputes within the Congress Party, which in January 1978 again disintegrated. Indira Gandhi became the leader of the Indian National Congress (I) – I of Indira. The Indira faction soon became completely dominant.

Indira Gandhi and her faction won big in the 1980 election; she became prime minister again. In the following years, India was characterized by regional unrest, especially in Assam, where at least 3,000 foreigners from Bengal were massacred, and in Punjab, where militant Sikhs fought for greater autonomy or detachment. In June 1984, Indira Gandhi ordered military attacks on armed Sikhs who had entrenched themselves in the Sikh’s foremost sanctuary, the Golden Temple of Amritsar; this probably cost at least 1000 people’s lives. As revenge, on October 31, 1984, she was killed by two of her own bodyguards. 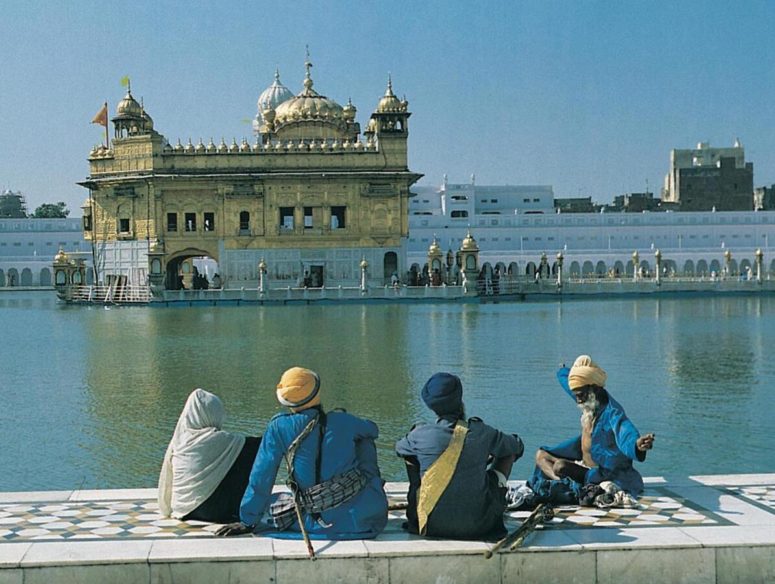 The Golden Temple of Amritsar (Punjab) is the foremost shrine of the Sikhs. In 1984, Indira Gandhi ordered military attack on armed Sikhs who entrenched themselves here. At least 1,000 people were killed in the fighting. As revenge, Indira Gandhi was killed by two of her own bodyguards who were Sikhs. In the 1980s, there were fierce fighting in Punjab as militant Sikhs fought for greater autonomy.