Georgia is a country in Western Asia, but is called the balcony of Europe by its inhabitants. It is located in Transcaucasia, east of the Black Sea and south of the Greater Caucasus. In the north, it is Russia, in the south of the Turkey and Armenia, in the east of Azerbaijan limited. Georgia is divided into 16 regions, including the province of Abkhazia. The capital of Georgia is Tbilisi.

Georgia is a small country with an impressive landscape: Caucasian mountains, a long coastline on the Black Sea and the seaside resorts Sukhumi, Pot’i and Bat’umi. The cultural city of Tbilisi has suffered many destructions in recent years, so that only a few intact historical buildings can be seen in the city center. Nevertheless, there are around 4,000 monuments all over the country that are worth visiting.

Georgia has a long and traditional history. During excavations, evidence was found that goblets and swords were made of gold in ancient Georgia in ancient times. The weapons and cups were sumptuously crafted and decorated with delicate decorations. In ancient times, metallic mineral resources were mined in the area of ​​today’s Georgia, which were processed directly. The metals were traded as early as the 6th century BC.
Romans and Greeks traveled to Georgia and saw a rich country with a developed road system that was lined with brick-roofed houses. In addition, the travelers described large cities with fortresses and defense systems that they did not know before. Georgia knew how to use its treasures at that time.

Around the 4th century, basilicas were built on the foundations of ancient temples in Georgia. In the Middle Ages it was Byzantine culture that influenced and shaped the people of Georgia. In the 10th and 11th centuries, cathedrals and imposing cross-domed churches were built in Georgia, which can still be visited today.

Form of government: Georgia has been a presidential republic since 1995, the constitution dates from the same year. The Georgian parliament is made up of 235 members. On April 9, 1991, independence from the Soviet Union was declared.

Language: The official language in Georgia is Georgian, which is spoken by 71% of the population. In Abkhazia, Abkhazian is the official language. Russian (9%), Armenian (7%), Azeri (Azerbaijani, 6%) and several regional languages ​​such as Ossetan (South Ossetia) and Assyrian are also spoken.

Georgia is located in the Near East and is surrounded by the Greater and Lesser Caucasus and the Black Sea. The neighboring countries are the Russian Federation, Armenia, Turkey and Azerbaijan. With 96,700 sq km, the area of ​​Georgia corresponds approximately to that of the state of Bavaria. Georgia is dominated by mountains that cover 87% of the country’s area. In the northern part of the country there is the southern slope of the Greater Caucasus, in the south the ridges of the Little Caucasus and parts of the Armenian highlands rise.
The Colchian Plain is in the west of the two high mountains, the Transcaucasian Valley extends in the east. The Lichi mountain range separates the western and eastern parts of the country.

The highest peak in Georgia at 5,201 m is the Schcara on the main ridge of the Great Caucasus, which forms part of the border between Georgia and Russia.

The longest river in the country with 1,364 km (including 351 km in Georgia) is the Kura (Mtkwari in Georgian). Its upper reaches are in the Little Caucasus from where it flows to the east. The largest lake with 37.5 sq km is the Parawani at 2,073 m. Georgia is the deepest known cave in the world at 2,190 m: the Voronya Cave.

This map of the population distribution in Georgia was created by the Worldmapper team. Densely populated areas appear bloated, the area of ​​sparsely populated areas is reduced. The shape of the grid has been preserved; an underlying map with the original geographical extent helps interpret the map. The distorted map should help to present abstract statistical information clearly. 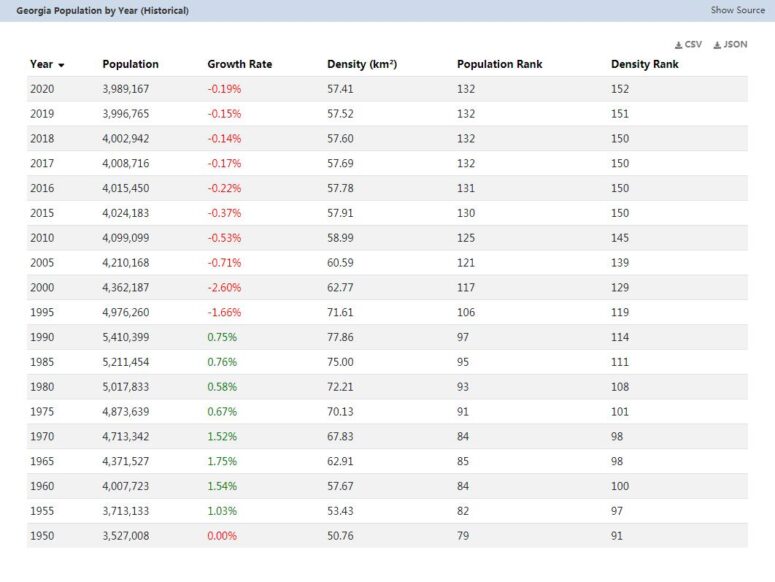