Several different writing systems are used for Indian languages. The oldest writing systems from India are kharoshti and brahmi. In addition comes the inscriptions of Indus culture, which are not yet interpreted.

Kharoṣṭhī is a Northwestern alphabet that probably originated from an Eastern variant of Aramaic script used in Persia during the Akemenids.

This script was used to write the languages Sanskrit, Pali and Prakrit and the writing direction is from right to left.

The oldest known inscription is on a coin from the 300s BCE. Of the Ashoka inscriptions, the editions of Mansehra and Shahbazgarhi in Pakistan are written with kharoshti, which also after Ashoka was used on coins and inscriptions a few hundred years ahead. Manuscripts in kharoshti writing are found in Central Asia. 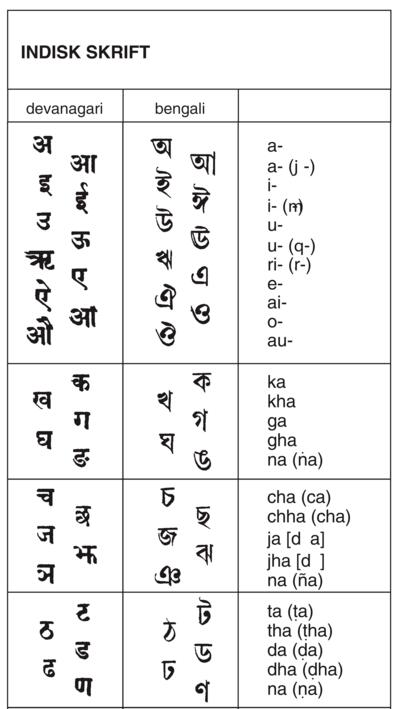 The Brāhmī script, which first appears in Ashoka inscriptions from the 20th century BCE. both in Northern and Southern India, read from left to right. The origin of the script has not been established, but there are many theories about its origin.

Strictly speaking, these are not alphabets, but syllables, that is, writing systems where the individual character does not denote a single sound but a syllable. However, the syllables are formed according to certain rules, so that by learning about 100 characters and the rules for character construction will be able to recognize and use all the hundreds of syllables without having to learn them one by one. The majority of these syllables are phonetic and reproduce the sound systems of the languages ​​quite carefully, while they are cumbersome and slow to write.

The Indian alphabets have their own numerical characters which led to a revolution in mathematics when they were conveyed to Europe by the Arabs as ” Arabic numerals “. The two ingenious innovations in this number system, compared to the Roman numerals, were partly the introduction of a special character for zero, and partly that the value of the individual number character is determined by the position of the digit in the number.

Muslims in South Asia often preferred to write their languages ​​in Arabic script, which was eventually provided with extra characters to express sounds not found in Arabic. Of the Indian languages, today only Urdu and Sindhi are written in Arabic, while Dhivehi – the national language of the Maldives – is written in his own writing, Thaana.

Latin letters are used for some minor languages ​​that have become written languages ​​through Christian mission. Such languages ​​are, for example, khasi in Meghalaya, Konkani in Goa and santali in Jharkhand.

In India, languages ​​are often identified by writing, and it gives the language the prestige of having its own alphabet. Among other things, a separate writing, Ol Chiki / Ol Cemetʼ, was made for santali for use in the elementary school in santalizing areas of West Bengal.