The capital city of Muscat is surrounded by old city walls and two Portuguese fortresses from the 16th century. Three carved city gates, narrow streets, old buildings, the mosque Ali mosque, the new mosque and the palace of the sultan characterize the metropolis of Oman.

The famous tomb of the Queen of Sheba can be found in Salalah, the capital of the southern Dhofar region. The city is located in the middle of coconut and banana plantations and also offers beautiful sandy beaches.

Another historic attraction in Oman is the ruins of the approximately 7,000 year old city of Urbar, which was only recently found near Schisr in the Rub al-Khali desert.

It is also believed that around 5 percent of Oman’s inhabitants still live a nomadic life. Oman has a very low population density, but the country is a popular immigration country. The population has increased steadily since 1994, but this has less to do with births than with immigration of foreign citizens. These come here because of the cheap labor market in Oman, because there is a great demand for workers. The proportion of city dwellers also increased.

The port areas in Oman are particularly popular with foreign immigrants because it is relatively quick and easy to find work here. Many Indians, Pakistanis, Bangladeshi and Filipinos live here. Social security is a major problem in Oman. Even today there is still a lack of old-age pensions or even security in the event of disability or for widows or orphans. So far, Oman has invested in developing medical care, and treatments are even free of charge for the population.

Form of government: Oman is a sultanate, the sultan’s family has ruled the country since the 18th century. In 1991, the absolutist Sultan Quabus Bin Said approved a government-level advisory meeting, which has no legislative function. The constitution dates from 1996. Sharia law (Islamic law) applies in Oman. The Consultative Council (Majlis al-Shura) has 83 members, the State Council (Majlis al-Dawla) 48.

Head of state and head of government: Sultan Qabus ibn Said, since July 23, 1970

Religion: Islam is the state religion, 75% of the population are Ibadhi Muslims. Others, such as Sunni and Shiite Muslims and Hindus 25%.

Local time: CET + 3 h.
There is no change between summer and winter time in Oman.
The time difference to Central Europe is +3 h in winter and +2 h in summer.

Oman is bordered by the United Arab Emirates in the northwest, Saudi Arabia in the west and Yemen in the southwest. In addition, the strategically important peninsula Ruus al-Jibal at Cape Musandam and the exclave Madha, enclosed by the United Arab Emirates, and the Kuria Muria archipelago and the island of Masirah to the east of the country belong to the national territory.

The coastal waters are the Arabian Sea to the east and south and the Gulf of Oman to the northeast. The national borders are not precisely defined in the interior.

You can find an accurate topographic map of Oman here.

The Al Hajar Mountains extend from Cape Musandam on the Strait of Hormuz to the southeast.

Al-Batinah (“lower country”) between Muscat and Sohbar on the northern coast is an approximately 250 km long, narrow coastal plain on the Gulf of Oman. This region is fertile and is irrigated with groundwater from the seasonal water-bearing wadis in the mountains.

Behind the coastal plain runs parallel to the coast for more than 600 km, the Hajar Mountains, the dry valleys of which flow into the drainless salt pan Umm As Samin. In the Hajar Mountains is the highest peak of Oman with the 2,980 m high Jabal Shams.

The coastal plain is separated from the desert by the mountains. Most of Oman is covered by the Inner Desert (Jiddat al Harasis).

From the approximately 500 m high plateau Az Zahirah, the country descends in a southwesterly direction to the Rub al-Khali desert. This desert extends over parts of Oman, Yemen and Saudi Arabia. It stretches to the coast of the Arabian Sea, separating the province of Dhofar in the south from the northern regions. In Dhofar the Karaberge extend along the coast.

This map of the population distribution in Oman was created by the Worldmapper team. Densely populated areas appear bloated, the area of ​​sparsely populated areas is reduced. The shape of the grid has been preserved; an underlying map with the original geographical extent helps interpret the map. The distorted map should help to present abstract statistical information clearly. 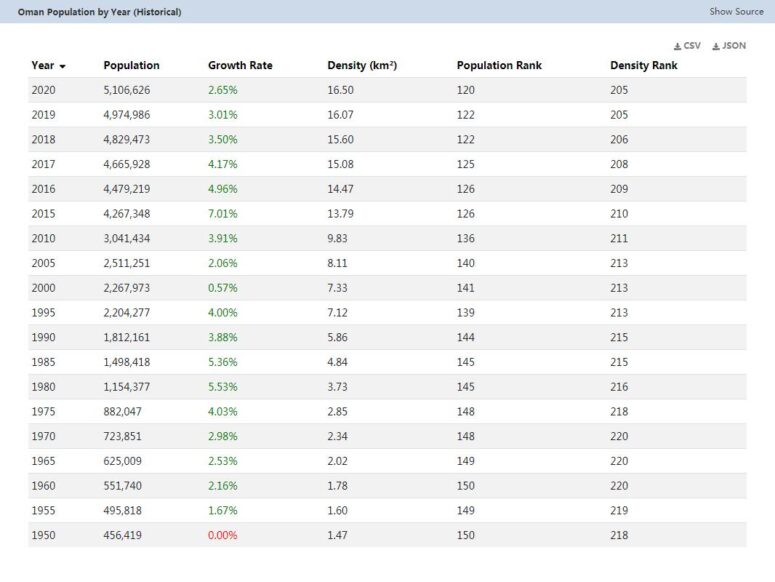