Sri Lanka is an island country in the Indian Ocean off the southern tip of India. The island’s landscape is characterized by low-lying coastal plains that extend inland from the north and west coasts. The central and southern areas are mountainous. The highest mountain is the Pidurutalagala with an altitude of 2,524 meters.

Sri Lanka offers 1,600 kilometers of beautiful beaches lined with palm trees. Warm, clear sea water and colorful coral reefs give the island its nickname “Pearl of the Indian Ocean”. In Colombo, Sri Lanka’s capital, ancient cultures combine with modern western influences. These attractions contribute to the fact that the island is becoming more and more popular with holidaymakers. Of course, it also helps that flights to Sri Lanka are not that incredibly expensive.

About 100 kilometers from Colombo is the naturally fortified city of Kandy. Here you will find numerous interesting museums that testify to the cultural importance of the city. The Temple of the Sacred Tooth is also worth seeing in Sri Lanka. Dalada Maligawa contains a Buddha’s tooth relic. A trip to the Kalapura (artisan village) near the city of Kandy is also worthwhile.

Archaeologists have long puzzled over the indigenous people of Sri Lanka. The residents of Sri Lanka have created a collection of various stories and legends about their ancestors over time. Even an epic of Hinduism has its main home in Sri Lanka. In the writings of Mahabharata and Mahavamsa, the Nagas and the Yakkas are referred to as the indigenous people of Sri Lanka. The Veddas tribe are the direct descendants of the yakkas. You still live in Sri Lanka today. However, there are not many members of this group on the island anymore. The jungle was their original habitat. However, this had to give way largely to the arable land. The yakkas were relocated to villages, where this people mingled with Sinhalese and Tamils.

Form of government: Sri Lanka has been a presidential socialist republic since 1978 and is represented in the Commonwealth. The constitution dates from the same year, the last constitutional change took place in 1987. The unicameral parliament (National Assembly) is made up of 225 members. Sri Lanka has been independent of Great Britain since February 4, 1948.

Local time: CET + 5 h.
In Sri Lanka there is no change between summer and winter time.
The time difference to Central Europe is +5 h in winter and +4 h in summer.

The island state of Sri Lanka is located in the Indian Ocean, southeast of the Indian state of Tamil Nadu. The north-south extension is 445 km, the east-west extension 225 km.

Sri Lanka is separated from India by the Palkstrasse and the Gulf of Mannar. The Palkstrasse is so narrow that you can see from Rameswaram from Sri Lanka. The coral islands made up of the Adam Bridge chain form a loose connection between the Indian mainland and the northwestern part of Sri Lanka. Until a severe storm in 1480, a natural dam was said to have existed here, according to British colonial reports.

Sri Lanka can be divided into three major landscapes: the central highlands with the tea growing areas and elevations that reach up to 2,500 m, the fertile lowlands through artificial irrigation and the palm-lined coastal area characterized by fishing.

The heart of Sri Lanka is the central highlands in the southern interior. A 65 km long high plateau running in the north-south direction is decisive for the highlands. Here you will also find the highest point in Sri Lanka, the 2,524 m high Pidurutalagala. From the south of the plateau, two mountains rise, on the one hand 50 km in an easterly direction with the 2,036 m high Namunakula as the highest point, on the other 50 km in a westerly direction to the 2,243 m high Adam’s Peak. Adam’s Peak is the most important mountain for several religions.
The center of the highlands borders two further plateaus to the east and west; in the south and north there are mountains separated from the highlands by valleys.

The largest area of ​​Sri Lanka is made up of large tropical lowlands(30 to 200 m in height). In the southwestern part of the country, these plains and valleys merge into the central highlands, the southeast is dominated by hills and laterite plains. Here the transition from the lowlands to the central highlands is much more rugged. The flat northern and eastern plains are divided by granite ridges.

This map of population distribution in Sri Lanka was created by the Worldmapper team. Densely populated areas appear bloated, the area of ​​sparsely populated areas is reduced. The shape of the grid has been preserved; an underlying map with the original geographical extent helps interpret the map. The distorted map should help to present abstract statistical information clearly. 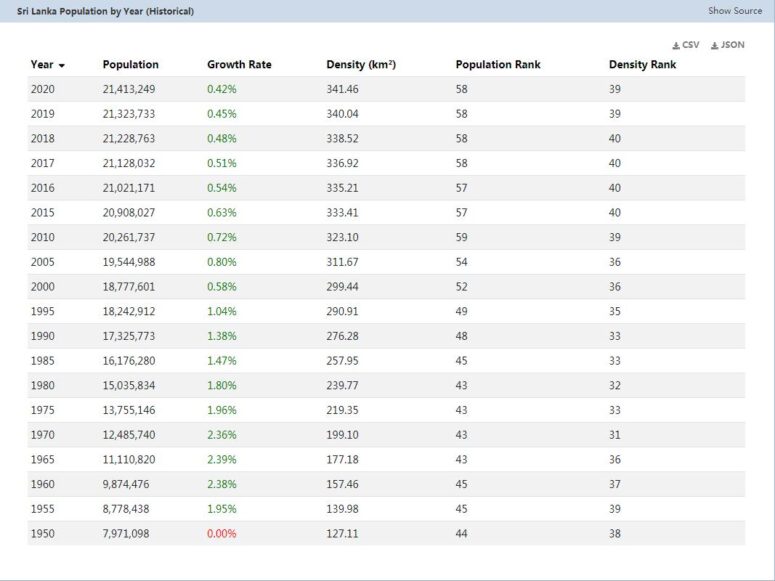 Sri Lanka is a typical tropical country with pronounced dry and humid seasons. This pattern is somewhat complicated by the two monsoons: in the Yala season (May to August), the southwest monsoon brings rain to the southern, western and central regions, in the Maha season (October to January) falls through the Northeast monsoons rain in the north and east of the island. The precipitation is highest in the south, southwest and in the central highlands, the northern and north-central regions are very dry.

Temperatures in the low-lying coastal areas are high all year round, but fall rapidly with increasing altitude and in the hilly country. The highest temperatures occur from March to June, while November to January is usually the coolest time of the year.

Four seasons can be distinguished in Sri Lanka: from mid-May to October, south-west winds from the Indian Ocean bring moisture, which leads to heavy rain showers in the mountains and southwestern Sri Lanka, while the east and northeast remain dry. The second season with predominantly cloudy weather is between October and November and is characterized by periodic gusts of wind and sometimes also cyclones. From December to March, the northeast monsoon transports moist air from the Bay of Bengal to the northern and northeastern parts of the country. From March to mid-May it is dry all over the country.