The Kingdom of Bhutan is one of the few countries in the world that has recognized that tourism is an important economic sector, but operates it only to a limited extent. The national culture in Bhutan still comes first today. This is also the reason why only 12,000 to 15,000 tourists are allowed to visit the country each year. The first private hotel in the Kingdom of Bhutan opened in 2007. It is the Zhiwa Ling. First and foremost, it is Buddhism that gives Bhutan a face and ultimately makes it what it is – a country where culture is capitalized.

The land of the thunder dragon, as Bhutan translates, has a peculiarity that should make school. All economic and industrial interests must be subordinated to environmental and nature protection. This means that if a project violates a nature conservation regulation, it cannot be implemented. This consistent attitude and respect for the natural environment of the country protects the landscapes in Bhutan from destruction.
The remarkable result is a fascinating variety of landscapes and locations. The areas of the nature reserves in Bhutan are larger than average. For example, over two thirds of the country is still completely covered with forest.
The motto is: practice early. Even in kindergarten, children learn the first important basic rules for dealing with nature. In school this is an integral part of the lessons and a lot of practical teaching is done in the great outdoors.

However, there is also a downside to nature conservation in Bhutan: however, the economy in Bhutan is developing slowly, many people have a very low standard of living. Youth unemployment is also extremely high. The problem is that many areas cannot be used as arable land, as this would violate the principles of nature conservation. So the country doesn’t produce enough rice to feed all of its residents. The government of Bhutan must therefore import basic foodstuffs.

Form of government: Bhutan has been a constitutional monarchy since 1969 and a sovereign state since 1971. The current constitution dates from 2005. The parliament consists of two chambers: of the 150 members of the state parliament ( Tshogdu ), 105 are elected every three years (one vote per family), the remaining seats are held by the king, 33 government officials and and 12 representatives from Buddhist monasteries. The second chamber of parliament is the Royal Council (Lodoi Tsokde) with 9 members. There are no parties in Bhutan. Bhutan has been independent of India since August 8, 1949.

Language in Bhutan: The official language in Bhutan is Dzongkha. Due to the difficult accessibility of many places, numerous dialects have been preserved, with the northern dialect Sharchop Kha being the most common. Nepali is also spoken. English has been taught in schools since 1964 and is widely used.

Religion in Bhutan: The Mahayana Buddhism mostly Drukpe school of the Kagyupa sect, is the state religion in Bhutan (75%). Hinduism is common among immigrants from Nepal (25%).

Local time in Bhutan: CET + 5 h. In Bhutan there is no change between summer and winter time.
The time difference to Central Europe is + 5 h in winter and + 4 h in summer.

The South Asian country of Bhutan is located on the southern slopes of the eastern Himalayas. The country borders the Indian states Arunachal Pradesh, West Bengal and Sikkim in the east, south and west and the autonomous region Tibet ( China ) in the north.

The Himalayas are dominant in Bhutan. More than 80% of the country is located above 2,000 m.

Bhutan can be divided into three main landscapes. In the southern border region to India the approximately 500 m high narrow depression of the Duar plain extends. This belongs to the foothills of the Ganges-Brahmaputra lowlands. The country rises steeply to the north. The Pre-Himalayas are between 2,000 and 3,000 m high and this is the main settlement area in Bhutan. The high mountain region of Lunana is located in the border region with Tibet.

The highest peak in Bhutan is the Kula Kangri (7,553 m). The highest mountain, which has never been climbed by humans, is in Bhutan (Gangkhar Puensum, 7,541 m).

More than two thirds of the country is made up of forest.

This map of Bhutan’s population distribution was created by the Worldmapper team. Densely populated areas appear bloated, the area of ​​sparsely populated areas is reduced. The shape of the grid has been preserved; an underlying map with the original geographical extent helps interpret the map. The distorted map should help to present abstract statistical information clearly. 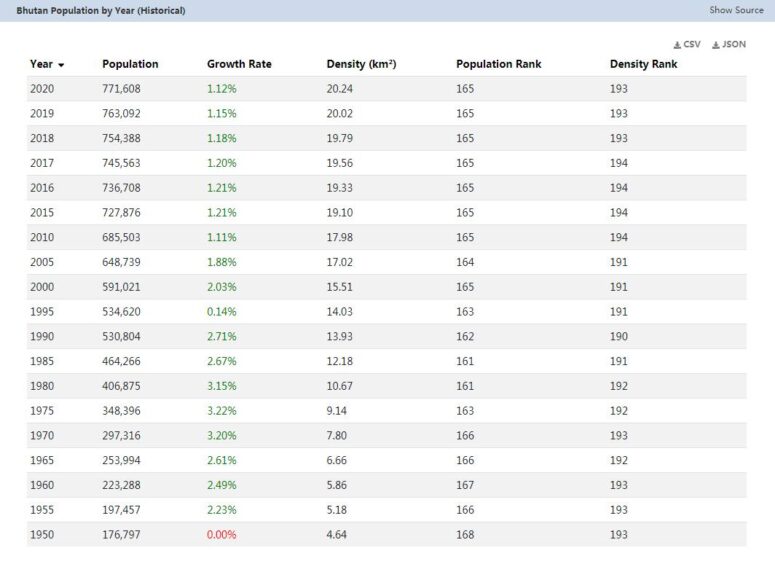 The climate of Bhutan is very different in the different regions. While the south is characterized by subtropical and tropical climates, the valleys of central Bhutan have a temperate climate with cool winters and hot summers. Winter in the mountains is very harsh, summers are cool. In southern Bhutan in particular, floods can occur during the monsoon season.

The higher regions of Bhutan have pleasant weather in the months before and after the rainy season, which lasts from May to September. The days from March to April and October to November are usually warm with less rain, sunshine and temperatures between 25 and 30 ° C. The nights can get cold between November and March.