The small state of Brunei is located on the Asian island of Borneo in the South China Sea. The official name is “Brunei Darussalam”, or “Brunei” for short. Brunei is a monarchy that emerged from an earlier sultanate and is also one of the largest oil producers in Southeast Asia, making it one of the richest countries in the world. It is a country with many facets and special features. Crisscrossed by numerous rivers, the Brunei landscape consists mainly of jungle.

The country itself consists of two parts, because Brunei is divided by the East Malaysian Limbang Valley and is also completely from the Malaysian state Sarawak enclosed. Malaysia is the country’s only neighbor. The only higher mountains of Brunei can be found in the border area, whereas there are extensive marsh areas in the west and northeast of the country.
Brunei offers natural beauties like the Wasai Wong Kadir waterfall or the largest lake in the country, Tasek Merumbun. Tropical rain forests with monkeys and reptiles are characteristic of the interior. Brunei has a tropical climate with a very high humidity of 27 ° Celsius on average.

Brunei is 30th in the list of the most developed countries, only 8th places behind Germany. One would not suspect this at first sight when looking at the outer regions of Brunei. The economic locations concentrate on individual points. Industrial areas can be found especially where there were or still are oil and gas reserves. However, as these reserves will soon be exhausted, Brunei had to think of alternatives to maintain its prosperity. Nowadays the Sultanate promises a lot from tourism, especially luxury tourism is constantly being expanded.

However, Brunei hardly has its own agriculture, at the moment more than 80 percent of the food is imported.

Form of government: Brunei has been an Islamic monarchy in the Commonwealth since 1984. The constitution dates from 1959. The Legislative Council was dissolved in 1962, the Council of Ministers, Religious Council, State Council and the Succession Council currently have an advisory role in the country. Brunei has been independent of Great Britain since January 1, 1984.

Head of state and head of government: Sultan Hassanal Bolkiah, since October 4, 1967

Language: the official language in Brunei is Malay. English and Chinese are also spoken.

Local time: CET +7 h. In Brunei there is no change between summer and winter time.
The time difference to Central Europe is +6 h in summer and +7 h in winter.

Brunei is located on the northwestern coast of Borneo. The two parts of the country are separated by the Limbang Valley, which is part of Malaysia, and surrounded by the Malaysian state of Sarawak. The eastern part of the country is hardly developed and is only connected to the west of Brunei by sea.

In the south of Brunei is the South China Sea, the coastline is 161 km.
The original coastal vegetation of the mangroves has largely disappeared due to the oil production.

The coastal area of ​​Brunei is densely populated, most of the settlements are at the estuaries. To the hinterland there is a flat hilly country with tropical rainforest crossed by rivers. The western and north-eastern part of the country is largely covered by swamps.

Most of the rivers have a northward direction of flow, including the longest river in Brunei, the Belait.

The 1,850 m high Bukit Pagon is the highest elevation in the country. 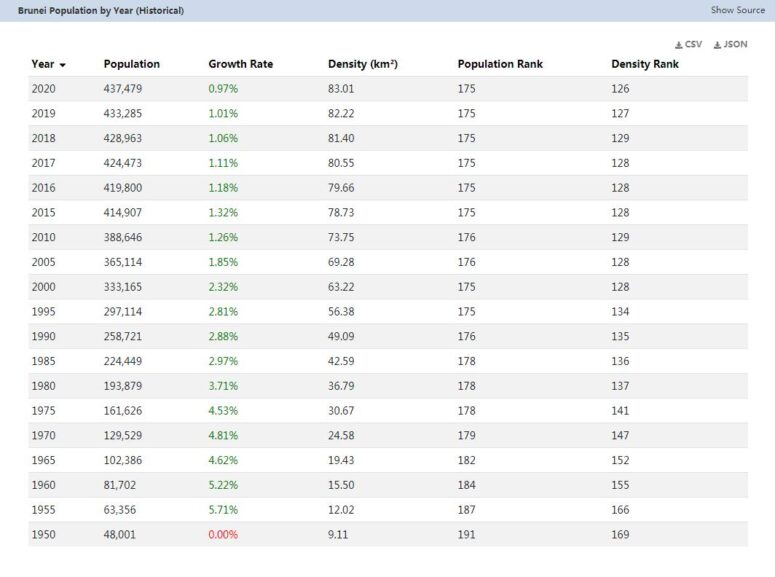 Brunei is determined by tropical rainforest climate. Precipitation increases from approximately 2,500 mm in the coastal region to 7,500 mm inland.
Brunei has no marked wet and dry seasons. Rainfall occurs all year round, most heavily between September and January. The temperatures range between 24 and 31 ° C. The average humidity reaches 79%, so it’s always quite humid.